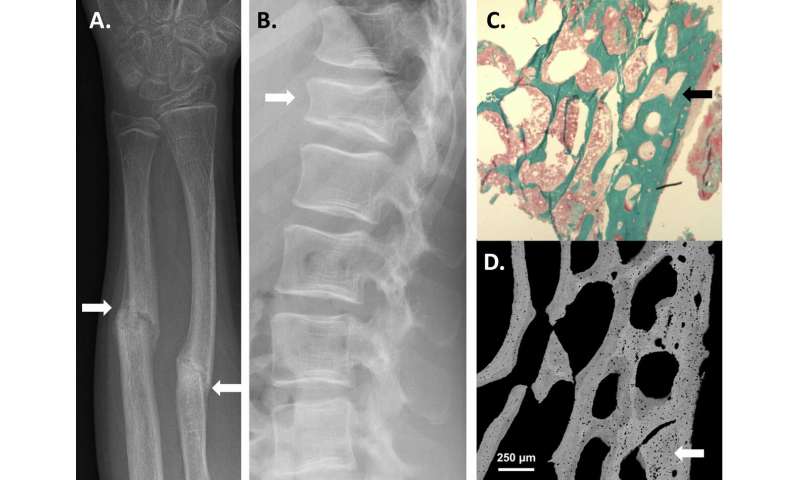 A research group headed by Professor Outi Mäkitie, University of Helsinki, identified in families with childhood-onset osteoporosis disease-causing mutations in a gene that had previously not been connected with the skeletal system or osteoporosis.

“Through extensive genetic research, we identified a gene defect underlying osteoporosis in two Finnish families with several affected family members. In collaboration with Dutch and American researchers, we found four additional families with mutations in the same gene resulting in either osteoporosis – as in the Finnish patients – or an even more serious bone disease associated with severe short stature and disturbed bone development,” Mäkitie explains.

“Mutations of the gene SGMS2 were identified as the cause of the disease. SGMS2 encodes an enzyme involved in sphingolipid metabolism; mutations lead to changes in the enzyme function and – through mechanisms so far partially unknown – a serious disturbance of bone metabolism and mineralisation,” says Minna Pekkinen, Ph.D., one of the principal investigators in the study.

Mutation carriers had, since childhood, suffered fractures in their limbs and spine even as a result of minor injuries. Certain study subjects also presented neurological symptoms, transient facial nerve paralysis being a particularly common one, which, according to Mäkitie, may be one of the distinctive features of this form of osteoporosis.

The examination of bone samples collected from three patients demonstrated that their bone tissue differed from normal bone tissue: the number of bone cells was atypical and bone mineralisation was disturbed. The changes were particularly clear in the cortical bone – the outer layer of bone – the region with the most abundant expression of the SGMS2 gene.

“This gene finding of ours is very important, as it significantly increases understanding of the mechanisms underlying osteoporosis and opens new avenues for the development of osteoporosis diagnostics and drug therapies,” Mäkitie states.

Osteoporosis is characterised by low bone mineral density and deteriorated bone microstructure, expressed as increased bone fragility and proneness to fractures. According to current knowledge, genes are among the key factors that determine bone strength. However, researchers have so far identified only a handful of genes with a significant effect on the risk of bone loss whose mutations cause familial osteoporosis.