Next year, I will be 30. And if I’m honest, I didn’t think I would ever see the day. Or should I say, I hoped I wouldn’t. For a significant period of my life, I lived with suicidal ideation. I can’t recall from what age it started, but I do know that from as young as 8, I had lost the will to live.

One of the main reasons revolved around my struggle with my bisexuality. The homophobia, biphobia, and monosexism I experienced (and then internalized) made it difficult for me to come to terms with and accept my identity. So, I hid it.

This had a huge impact on my mental health. I lived with suicidal ideation for a huge chunk of my life—and I’m not alone in this. Statistics show that 40% of bi people have considered or attempted suicide. These are beyond the statistics of that of gay or lesbian people. For bi people, the sheer lack of visibility means that people often feel isolated or alone in their identity along with their struggles. They may fear how difficult their life will be should they come out—that they’ll never be happy. I should know; I’ve been there myself.

I have always been seen as feminine in character, from loving soft toys and teddies to being more emotional. I learned from a young age that these behaviors were frowned upon in men, no matter your age. My Dad would berate me for wanting to buy or play certain things, and ridicule me when I cried or showed emotion. I’d be asked when I was going to stop acting like a girl and grow up. It was clear to me that I didn’t live up to my Dad’s expectations.

And this was extended to society as a whole, especially as I got older and didn’t grow out of this so called “girlish” and “childish” phase. Entering secondary school only increased the pressure. I was expected to love sports and play video games like Call Of Duty, to work out and chat up girls.

But I didn’t. And this often meant I was subjected to verbal abuse by my peers. I was often called batty boy and gay by my classmates due to my supposed lack of masculinity. I felt like I was broken, wrong, that I needed to change. But this wasn’t something I could do happily. I know because I tried. I was stuck between a rock and a hard place, neither situation bringing me any amount of joy. 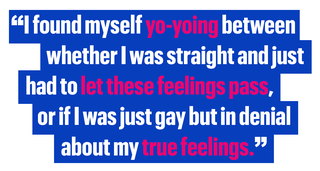 At around 11 (which was secondary school age), I had started to have complicated feelings for boys. I found myself taking lingering looks at my classmates in the changing rooms during PE, being curious about certain parts of their body. This was made all the more confusing by the fact that I also found myself having crushes on the girls in my class, thinking about kissing them or holding their hands.

I thought being gay was bad and wrong, so I bottled up my feelings for men. I found excuses to enable this: explaining away my feelings since I was still attracted to women; chalking it up to puberty hormones; telling myself I just wanted to be those guys: the pinnacle of masculinity, the image everyone wanted me to be. I knew, deep down, that if I ever expressed my feelings, the homophobic bullying that I was already experiencing would only intensify.

But these feelings didn’t go away. I found myself yo-yoing between whether I was straight and just had to let these feelings pass, or if I was just gay but in denial about my true feelings. In my mind, there were only two options, and I had to make a choice. I chose straight.

Bisexuality wasn’t a label I was aware of, at least not at 11, when I first started having these confusing feelings. I didn’t find out about this word until I was 17, when a classmate came out as bicurious. However, as soon as the idea of a new option presented itself, so too was it thrown away. My peers mocked the very idea of this sexuality, said it made no sense and that they should just tell the truth: that they were gay.

Due to these experiences, throughout my life, I constantly had the desire to die. I used to look longingly out of the window and imagine what would happen if I were to jump, whether the impact would kill me or not. I hoped that I would be “unfortunate” enough to be crossing the street as some driver with road rage stormed down and knocked the life out of me.

Before bed, I often found myself lying down, in the dark, tears streaming down my face, palms pressed against each other and praying, begging God to end my life. I talked to my deceased relatives, asked if I could join them, pleaded with them to take me away from this life. But nothing happened, nothing changed. And so, I cursed God, cursed them for ignoring me, for letting me suffer, for torturing me.

I tried to find excuses as to why I could never be attracted to men. I told myself I could never imagine having sex with a man, and sure as hell couldn’t be in a relationship with one, especially since all the men in my life thus far had treated me with such cruelty. This all changed in 2016, when I fell in love with my best friend, a cishet man. I continued to bottle up my feelings, finding ways to deny them or make excuses. But they didn’t work. And so, in January 2017, I came out as bisexual.

I soon discovered this so-called best friend of mine had been talking behind my back, calling me “too much.” This crushed me. It was a phrase I’d heard throughout my life: I was too emotional; too loud; too talkative; too feminine. I’d heard this from everyone, from complete strangers to friends and family, and, now, from guy I loved.

I fell out with this friend and broke my heart in the process. I started to unravel. I began questioning every little bit about myself, my personality, my identity. Everything I had been called all these years came flooding back. The self-hatred and self-loathing grew and I no longer had any strength to fight it. The voices grew so loud I could no longer function. Social situations became immensely difficult as I put doubt on every friendship I held. My trust in people had been completely destroyed. I couldn’t so much as utter a single sentence without overthinking it. I was certain that I was annoying people with my mere existence. My friendships slowly fell apart around me as I spiraled deeper and deeper.

This was the closest I ever came to ending my life. I still recall the numerous times I would be standing there, on the Tube platform, my eyes fixated on the third rail as tears ran down my face. All I wanted was to jump, to hug that third rail, to feel the electricity coarse through my veins, the warmth filling my cold body as I drew my last breath. I wondered what would happen if I made that leap. Would someone grab me? Try to stop me? Would the electricity kill me? Or would it be better to wait for the train, jump out in front of it? Would the impact be enough? Or would I need it to run through me?

I cried and cried and willed myself to jump, pleaded with my legs to move, and yet I stood there, frozen. The train arrived and left and I was left, standing there, still breathing. This only exacerbated the hatred I held for myself. I couldn’t even do the one thing that would end the pain and suffering. One small act, and I was too much of a coward to do it.

I don’t often talk about my suicidal ideation for this very reason. I thought I was just being “dramatic,” a phrase I’d been called when I got “emotional.” The fact that I had never made an attempt on my life made me think I wasn’t actually suicidal. “Everyone has bad days,” I would tell myself. “Stop being over-dramatic.”

But my desire to live was at an all time low. I had come out, and for what? To make my life harder than it already was. To remind myself that I was broken, damaged, simply unloveable. I wished I could take it all back, to shove myself back into the closet. But I knew it was far too late to even try to do that.

All I could do was keep going. After all, I had already lost everything I held dear; what else did I have to lose? In December 2017, after an incredibly tumultuous year, I started connecting with the LGBTQ+ community, going to events and spaces. I found people I could talk to. But this wasn’t always easy. Some people didn’t understand bisexuality, and others didn’t think it was real. Bi people experience “double discrimination”: i.e. discrimination from within and outside the LGBTQ+ community. And so many people that I met were white and, therefore, couldn’t fully grasp my struggle or downplayed my experiences of racism.

But through all of that, I did meet some good people, and I continued to come out to those I still had around me. Some were initially accepting, only to later erase my identity or reveal themselves as merely able to tolerate my identity. Others accepted me, but refused to acknowledge my struggles, the trauma I had experienced all those years. I eventually undertook cognitive behavioral therapy (CBT) to talk about my struggles. While some of the techniques I learned were incredibly useful, the sessions were too brief and I was discharged far too quickly. I felt like my therapist didn’t really understand how my identity—both my race and my bisexuality—played into the issues I was experiencing. I hope one day to take counseling—privately, outside of the NHS—to really unpack this trauma.

There was a time, after coming out and having everything fall apart, where I cursed the phrase “it gets better.” But despite everything, coming out was the best thing I ever did. You see, coming out isn’t for everyone else; it’s for you. Once it’s out, you’re free. You can finally be you, and embrace yourself. There’s so much power in knowing who you are and living true to it. I am now surrounded by people who love me—the real me. I have a wonderful and supportive boyfriend, whom I live with. And I am able to dedicate my spare time to helping others like me.

I write about my story, my struggles, and how I overcame them in the hope that it will be a comfort to others. I volunteer in the community, donating my time and money to help the cause. And I deliver talks and speak on panels, all in the name of boosting visibility of bisexual men and queer people of color.

Those suicidal thoughts still linger, but they’re quieter now, more so than they’ve ever been. I accept the fact that these scars may never truly be gone, but, for the first time in a long time, I don’t want to die. In fact, I find myself actually wanting to live.

To see how my life plays out.

I hope I make the most of it.