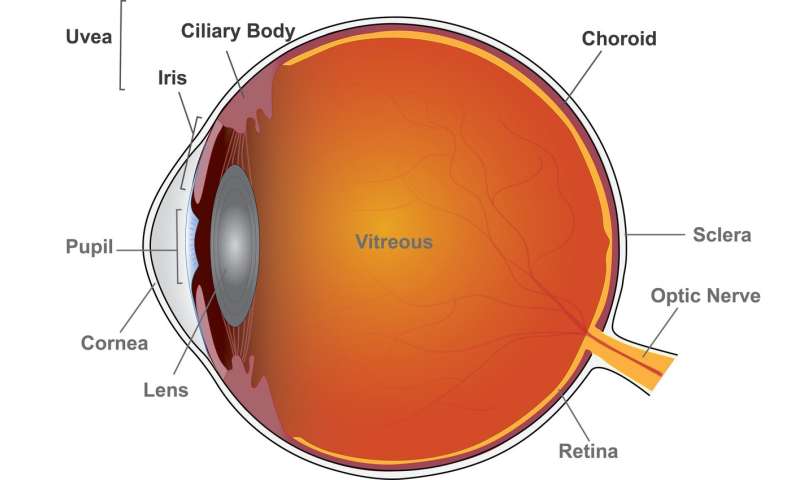 Methotrexate and the more expensive mycophenolate mofetil performed similarly in a head-to-head clinical trial that compared the two drugs for treating noninfectious uveitis, an eye disease that accounts for up to 15% of blindness in the U. S. In cases of more severe disease, posterior uveitis and panuveitis, the international trial showed that methotrexate was more effective in controlling inflammation. Investigators published results from the trial today in the Journal of the American Medical Association. The National Eye Institute, part of the National Institutes of Health, funded the trial.

Uveitis is inflammation of the eye’s blood vessel-rich middle layer of tissue called the uvea. The condition can affect the iris (anterior uveitis), ciliary body (intermediate uveitis), and choroid (posterior uveitis) parts of the eye and is often chronic. Panuveitis affects multiple areas of the uvea. Clinicians often first treat intermediate and posterior or panuveitis with oral corticosteroids like prednisone to control inflammation, but seek to quickly taper patients to a low dose and switch them to steroid-sparing drugs such as methotrexate and mycophenolate mofetil. Long-term, high-dose corticosteroid use risks serious side effects including osteoporosis, diabetes, and weight gain, and other eye problems including glaucoma and cataract. Other steroid alternatives such as biologics like adalimumab also carry serious side effects.

The First-line Antimetabolites for Steroid-sparing Treatment (FAST) Uveitis Trial enrolled and randomly assigned 216 patients with intermediate or posterior/panuveitis from India, the United States, Australia, Saudi Arabia and Mexico to methotrexate (107 participants) or mycophenolate (109 participants) treatment groups. Over six months, participants tapered to a maximum dose of 7.5 milligrams prednisone daily, while receiving either three grams oral mycophenolate daily or 25 milligrams methotrexate weekly. Participants reduced their dose, if necessary, to control adverse side effects such as nausea.

To assess control of inflammation, the research team performed clinical exams and ocular imaging in the front and back parts of the eye. They also checked visual acuity.

In patients with posterior or panuveitis, the most severe forms, 74% in the methotrexate group achieved control at six months, versus 55% in the mycophenolate group, indicating that methotrexate was significantly more effective at controlling inflammation for this subtype of uveitis.

Both methotrexate and mycophenolate mofetil, which are systemic and affect multiple cell types in the body, can cause side effects such as fatigue, nausea and headaches, but serious side effects are rare. Because participants were allowed to reduce dosage to control these side-effects, few of them dropped out of the FAST study due to their inability to tolerate the medication. Total rates of adverse events were similar between the two drugs.