Co-sleeping is a hot-button topic when it comes to babies — but what about when it’s older kids sharing a parental bed? Lots of celebrity parents have been outspoken about their co-sleeping practices, and Tori Spelling just added her voice to the mix, revealing that four of her five kids are currently sleeping in her bed. 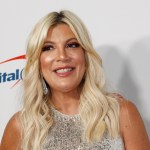 Spelling was a guest on SiriusXM’s Jeff Lewis Live, and apparently, there’s word going around Hollywood that she and husband Dean McDermott — who share kids Liam, 14, Stella, 13, Hattie, 9, Finn, 8, and Beau, 4 — are going through a rough patch in their marriage.

“No, ’cause then you spill my s— right here,” the Beverly Hills, 90210 actress and entrepreneur said with a laugh. “Of course I’m not going to tell you what’s really going on.”

But Lewis persisted: “What is really going on? You put the wedding ring on. Are things okay? Because I feel like the last time you were here things were good, you were having sex. Are you guys sleeping in the same bed?”

Yikes, Jeff Lewis. But here’s where Spelling got honest — if not about the state of her marriage, about who exactly is in her bed.

“You know what, right now my kids and dogs sleep in my bed,” she said.

Lewis continued to dig and made an assumption as to where, exactly, McDermott is sleeping in their house. “Okay. So that’s a no — so he’s in the guest room,” to which Spelling replied, “He’s in a room.”

Spelling totally didn’t have to share this, but she went on to reveal that several of her kids have been sleeping with her since McDermott was away for a period of time while filming. “Since he left — this is not good, you guys — but since he left, he was gone for six months filming in another country, they all stayed with me,” Spelling explained. “So I currently still have four in the bedroom with me who have yet to go back to their rooms.”

Married since 2006, Spelling and McDermott’s relationship woes have been widely reported over the years on their own reality shows, but as to any plans to boot her kids out of her bed, well… studies say parents who co-sleep have closer relationships with their children, and the kids, in turn, are more independent and confident. We have no idea what’s going on in the Spelling-McDermott home, but we’re sure that co-sleeping or not, the couple is doing what’s best for their own family.

Read about how Heidi Klum, Angelina Jolie, and more celebrity parents co-sleep with their kids.