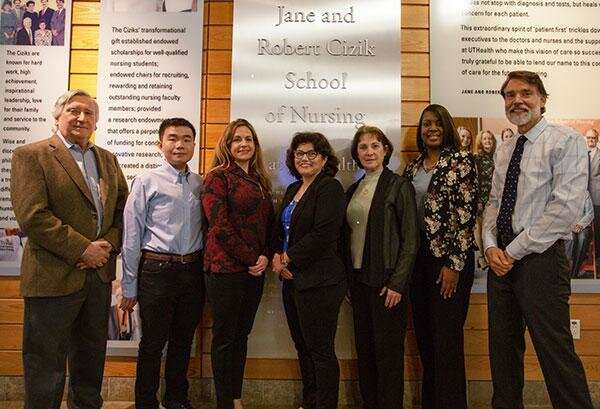 To help Harris County target its preventive strategies for sudden unexpected infant death (SUID), researchers at The University of Texas Health Science Center at Houston (UTHealth) have identified areas of the county where these tragic deaths are most likely to occur.

Their research appears in the American Journal of Forensic Medicine and Pathology and was funded by an organization that supports Cizik School of Nursing at UTHealth called Providing Advancement Resources To Nursing Education Research and Students (PARTNERS).

“We are the first to break down the incidence of SUID by neighborhood in Harris County. Our hope is that this information will be used to implement intervention strategies such as the ‘Back to Sleep’ safe sleep campaign,” said Stacy A. Drake, Ph.D., MPH, RN, the study’s lead author and an assistant professor with Cizik School of Nursing.

Conducted in collaboration with the Harris County Institute of Forensic Sciences (HCIFS), Drake said SUID is defined as the sudden and unexpected death of an infant less than 1 year of age.

Three high-risk areas were identified by examining the autopsy reports of 732 sudden unexpected infant death cases in Harris County between 2004 and 2013. One is in the county’s north central area and includes Aldine and Greenspoint; a second is in the northeast area and contains the Fifth Ward, Settegast, and Kashmere Gardens; and a third is south and encompasses Sunnyside and South Park.

“The retrospective examination of infant deaths in Harris County highlighted that the prevalence of SUID occurred primarily within areas of poverty,” Drake said. “These findings also suggest that there are modifiable risk factors that can reduce the incidence of SUID.”

Modifiable risk factors identified in the paper include unsafe co-sleeping, improper sleep position, not sleeping in a crib, tobacco use, and alcohol use.

Most were found dead while co-sleeping. “Co-sleeping with infants is not for adults who are heavy sleepers or who use alcohol or drugs,” Drake said.

Drake said there is much to learn about co-sleeping safely from other cultures. For example in Nigeria, parents and infants co-sleep on a hard surface, eliminating the chance of an infant being wedged between pillows or mattresses. Light sleepers in Nigeria rest next to the child and keep other children away from the sleeping infant.

Almost two-thirds of the infants were sleeping in an improper position. The American Academy of Pediatrics (AAP) recommends that infants sleep on their back but the researchers found that 53 percent were sleeping on their stomach and another 14 percent on their side.

“The vast majority who were sleeping on their back were found on an unsafe sleep surface,” she said.

Drake said, “Of the 162 sleeping in a crib, 139 were determined to be in an unsafe environment, which could include stuffed toys, blankets, pillows, and improperly fitted sheets.”

The study confirmed a known association between smoking and SUID. “If you are a smoker and are planning a family, you should quit as soon as possible. More than 50 percent of the maternal co-sleepers in the study had a history of tobacco use,” she said.

Alcohol use is also discouraged. Thirty percent of the mothers in the study reported a history of alcohol use.

Additional research is warranted to determine why 90 percent of the infants reportedly had an illness within 72 hours of death, Drake said. “What this means in light of impending death is not known,” she said.

The researchers abstracted data from death investigation records such as infant demographics, maternal history, and autopsy results. The data were abstracted based upon guidelines from the National Association of Medical Examiners and the Centers for Disease Control and Prevention.