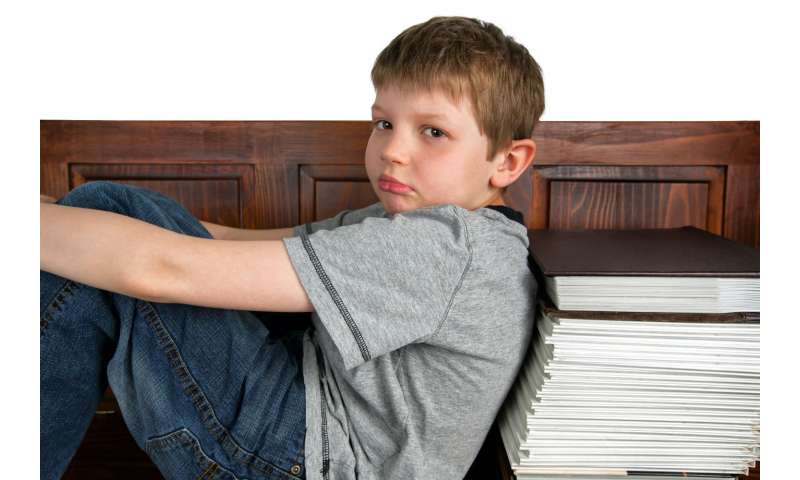 New research, published in the medical journal JAMA Pediatrics, shows that boys from low-income backgrounds who were inattentive in kindergarten had lower earnings at age 36 while boys who were prosocial earned more.

The study was based on analysis of nearly 1,000 boys from low-income neighbourhoods of Montréal. The boys were assessed by kindergarten teachers at age six for inattention, hyperactivity, aggression, opposition and prosocial behaviours (such as being kind, helpful and considerate) and followed up for 30 years. The childhood behavioural assessments were then linked to their tax return records in adulthood.

The study controlled for factors known to influence earnings including other problem behaviours and the children’s intelligence and family background.

Although previous studies have linked childhood disruptive behaviour and low self-control to lower earnings, this study is the first to measure earnings using tax records and to show that these behaviours can be identified as early as kindergarten with effects persisting across three decades.

Crucially, the study shows that after accounting for other disruptive behaviours at age six —including hyperactivity, aggression and opposition —only inattention and prosocial behaviours were associated with later earnings.

Why behaviour matters for earnings

Longitudinal studies like this one cannot prove that early behaviours cause lower earnings; they only show that they are associated. A large number of events from kindergarten onwards could have influenced earnings at age 36.

One of the most important factors may be educational attainment. There is a well-documented link between childhood inattention and education underachievement including failure to complete high school. These represent important barriers to obtaining more complex and often better-paid jobs.

The link between childhood prosocial behaviour and higher earnings is perhaps more intuitive. Children who are prosocial tend to have better peer relations, fewer adolescent behavioural problems and better educational attainment, which should positively influence employment opportunities, performance and earnings.

In the long term, childhood behaviours like inattention and prosociality can nudge children towards social and educational pathways that lead to distinct social and economic outcomes decades later.

Our study does not imply that we should push children to be attentive and prosocial in the hope that they later make more money —although there are many other good reasons to support and promote these behaviours.

Rather, we suggest that children at the behavioural extremes, who are frequently the most disadvantaged, should be provided with early monitoring and support to maximize their chances of success.

Early identification and intervention for problem behaviours is critical because it reduces the accumulation of negative life events, such as substance abuse and school failure, and is more likely to succeed in the long run.

Prosociality can be developed through quality early childhood education which is shown to pre-emptively reduce the need for later special education.

There are a range of interventions for children aged five to eight years designed to improve attention and promote prosocial behaviours.

Programs that reduce inattention include those targeting self-control and executive functions, such as mental flexibility and impulse control, and drug treatments in severe cases.

One of the limitations of this study is that it focused on boys from low-income backgrounds in a large North American city, so it is unclear how findings will apply to girls or children living in other contexts. Future studies—currently under way—will help address these questions.

This study adds to an accumulating body of evidence showing that inattention is one of the most important early behavioural risk factors for a range of adverse life outcomes, including lower earnings.