Long-lasting immunity against bacterial diseases such as tetanus and diphtheria is induced by a course of toxoid vaccines which cause an immune response against weakened versions of specific bacterial toxins called toxoids. 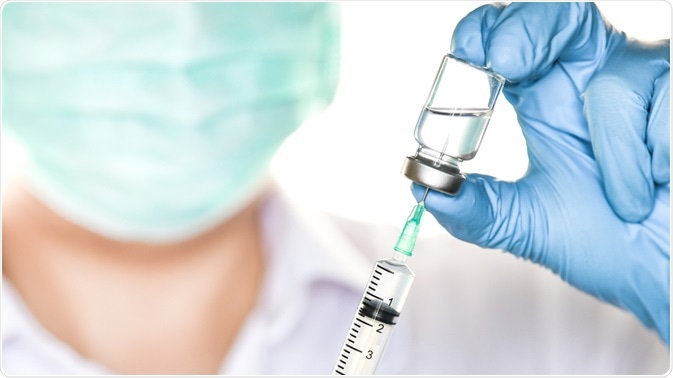 What is a toxoid?

Toxoids are altered forms of toxins (exotoxins secreted by bacteria) whose toxicity is weakened; however, their immunogenicity is maintained. As such, toxoids are able to cause a protective immune response, but not lead to active toxin-induced disease. Toxoids are therefore excellent choices to be used in vaccinations against certain bacterial toxins.

What is a toxoid vaccine?

Toxoid vaccines use toxoids (as antigens) to induce an immune response in protecting against diseases caused by toxins secreted by specific bacteria. By using toxoids, the body is able to form an immune response to the original toxin (maintained immunogenicity), but since the toxoid is a weakened form of the toxin, it cannot lead to any toxicity or toxin-induced disease. Compared to other vaccines, toxoid vaccines are more stable and less susceptible to damage caused by temperature, humidity, or light.

What are the Different Types of Vaccines?

During the immune response mounted by the body in response to exposure to toxoids, Th2 (CD4+) and B-cells become activated which produce immunoglobulins against the immunogenetic part of the toxoid (which is the same as it is in the toxin), allowing for protection against the actual toxin should exposure ever occur.

Usually, toxoid vaccines are given as part of a course of multiple doses throughout childhood and adulthood for maximum protection, and booster shots can be given if you are traveling to a high-risk country for example.

Common diseases caused by bacterial toxins are typically immunized against using toxoid vaccines. Specific examples include vaccinations against tetanus (Clostridium tetani), diphtheria (Corynebacterium diphtheriae), botulism (Clostridium botulinum) and whooping cough; pertussis (Bordetella pertussis – though this tends to be bacterial components rather than toxoids per se, but components are incorporated alongside toxoids of other bacteria).

Tetanus (caused by Clostridium tetani) leads to muscular spasms occurring across the body which last for a few minutes at a time. Whilst recovery can occur naturally in most people over the course of many months, it is also fatal in approximately 10% of all non-vaccinated cases. Vaccinations against tetanus have dramatically cut the number of cases worldwide (up to 95%) as well as the fatality rate. Almost all cases of tetanus that occur nowadays happen in non-immunized and inadequately immunized individuals.

Unlike a majority of toxins and pathogens, exposure and recovery to natural tetanus toxins do not result in natural immunity due to the potency of the tetanus toxin. However, exposure to the tetanus toxoid (TT) vaccine results in robust immunological memory. It is a safe and effective vaccine, but it can result in localized inflammation (redness and pain) at the site of injection in as many as 25-85% of all people, though severe allergic reactions are extremely rare.

Diphtheria (caused by Corynebacterium diphtheriae) leads to symptoms of fever, swollen glands, and a thick grey-white coating at the back of the throat. If it infects the skin (such as through wounds or cuts), it can cause large pus-filled blisters or ulcers.

The Diphtheria vaccine has resulted in a 90% reduction in cases worldwide and tends to have very few side effects apart from a raised bump at the site of injection which may last for several weeks. Alongside tetanus, diphtheria is immunized against using a combination vaccine.

The Diphtheria, Pertussis & Tetanus (DPT) vaccine is a trivalent vaccine that incorporates toxoids and killed bacteria from the 3 different bacteria which cause the 3 diseases. Typically, the DPT vaccine contained toxoids of Corynebacterium diphtheriae & Clostridium tetani, whilst containing killed cells from Bordetella pertussis.

The DTP vaccine is typically given as part of a course of immunization starting in young children (part of a hexavalent 6-in-1 vaccine) and as boosters (DTP only) in teenagers (as part of 5 doses in the UK for example). Specific administration of doses varies in different countries. The DTP vaccine should not be given to those that suffer from severe anaphylaxis to a previous toxoid vaccine, or to one of the ingredients in the vaccine.

In summary, toxoid vaccines are extremely effective and safe vaccines against common diseases causes by bacterial infections, including tetanus and diphtheria.

Usually, vaccinations against these diseases are given as part of routine childhood vaccinations (variations of the DTP/TDaP vaccine; alongside against pertussis) and have resulted in over 90-95% drop in cases and deaths worldwide since their introduction. Almost all new cases happen in non-immunized or inadequately immunized individuals.

Osman is a Postdoctoral Research Associate at the University of Sheffield studying the impact of cardiovascular disease (atherosclerosis) on neurovascular function in vascular dementia and Alzheimer's disease using pre-clinical models and neuroimaging techniques. He is based in the Department of Infection, Immunity & Cardiovascular Disease in the Faculty of Medicine at Sheffield.