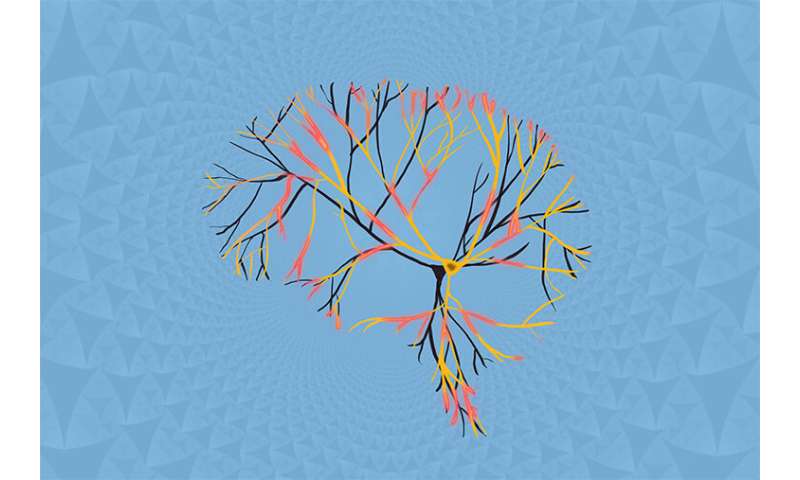 Hacking into brain signals may be more straightforward than once thought.

Physicists studying the brain at Washington University in St. Louis have shown how measuring signals from a single neuron may be as good as capturing information from many neurons at once using big, expensive arrays of electrodes.

The new work continues the discussion about how the brain seems to function in a “critical” state, operating at the cusp between two phases of activity in a way that offers advantages for information transmission and processing. The research is reported June 12 in the Journal of Neuroscience.

What information single neurons receive about general neural circuit activity is a fundamental question of neuroscience. Researchers in the laboratory of Ralf Wessel, professor of physics in Arts & Sciences, have been exploring sensory information processing in the brain for years, using advanced neurotechnology and physics-inspired data analysis.

“We know that in critical systems you can zoom in or out really far, and get the same statistical patterns. This property is called scale-freeness—or fractalness—and criticality may explain the origins of widely observed fractal activity in the brain,” said James K. Johnson, first author of the paper and a graduate student in the Wessel laboratory.

For this new work, the researchers wanted to zoom all the way down. Evidence for criticality has been observed at all larger scales, they explained.

“The scale of the single cell was the last frontier,” Johnson said. “We cheated a bit, though. The statistical patterns used to evince criticality in the brain are called neuronal avalanches. Essentially, it’s just a spurt of ‘spiking,’ or messaging between neurons.”

“We cannot know if two randomly selected neurons are directly connected—and (even) if we could, spiking between those two is so rare that we would need hours of recordings from those two neurons,” Johnson said. “So instead, we ignored spiking and looked to see what neuronal avalanches look like from the neuron’s perspective.”

Single-cell recordings go back at least 70 years, but have been eclipsed by new ways of recording many neurons at once. The Washington University researchers updated and mastered a previously used technique to record electrochemical input fluctuations from inside a single neuron.

By placing a tiny glass tube containing an electrode on the cell body—actually breaking into the cell, and tricking it into thinking the tube was a piece of its cell membrane—the researchers were able to record voltage changes caused by ion exchange. The method itself is not new, but the team was able to record data inside a living turtle brain for much longer than normal (more than 30 minutes).

“When our cell receives inputs, it looks like ‘blips’ or ‘piles of blips’ in our recordings,” Johnson said. “Usually, the neuroscience community focuses on the average value or some summative measure, and fluctuations are often modeled as pure noise. We did something new. We did the same statistical analysis on the precise geometry of the ‘blips’ that one normally does on neuronal avalanches when testing for criticality.”

When run through an exhaustive battery of tests, the single-cell data that the researchers collected was consistent with systems at their critical point almost as often as when using data from large arrays.

“Being at the critical point offers many advantages for information transmission and processing that may underlie the resilience, adaptability and variability of brain function,” Johnson said.

“The neurons of your primary visual cortex never fire in the same sequence twice, yet you can see the same thing twice. In a critical system, this is no mystery; it’s completely normal and no complicated model is needed to explain it,” Johnson said.

The new work also advances the understanding of physics theories related to emergent properties and coordination between neurons.