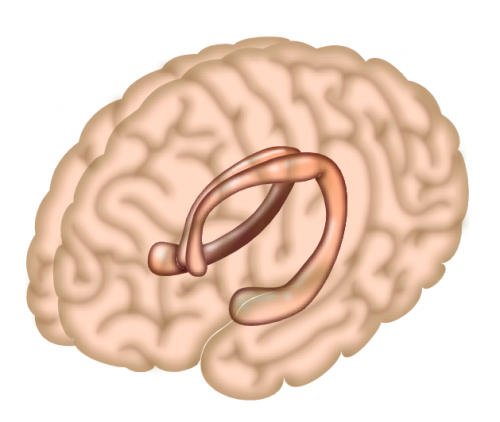 The amygdala and the hippocampus—structures in the brain that are involved in emotion, learning, and memory—have been found to play a role in a diverse range of disorders, such as attention-deficit/hyperactivity disorder (ADHD), anxiety, depression, and schizophrenia. Research investigating the development of these two structures has shown that differences in age, sex, and pubertal status affect the bulk volume of these brain structures. However, researchers have yet to understand the dynamics of volume and shape change that occur between childhood and early adulthood.

“Because the amygdala and hippocampus have been so often implicated in psychiatric and neurodevelopmental disorders from childhood through young adulthood, it’s especially important to understand how brain development occurs in healthy people, so we have a stronger comparative framework for when the process goes awry in disease,” said co-first author Ari M. Fish, a former Postbaccalaureate Research Fellow in the Developmental Neurogenomics Unit, part of the NIMH’s Intramural Research Program.

To learn more about the growth trajectories of these two structures from childhood through early adulthood, researchers examined 1,529 structural magnetic resonance imaging (sMRI) scans collected from 729 participants between the ages of 5 and 25 in a large longitudinal single-site sMRI study of healthy development. The researchers were particularly interested in determining whether there were any sex-based differences in the development of these brain structures, as many psychiatric and neurodevelopmental disorders that emerge during childhood, adolescence, and early adulthood do so unequally in males and females.

According to author Armin Raznahan, M.D., Ph.D., chief of the NIMH Developmental Neurogenomics Unit, “Our analyses focused on trying to pinpoint key moments of anatomical change in each structure, and then comparing the ages at which healthy males and females reached these developmental milestones. We also used new shape analysis methods to better understand where typical development was most different between the sexes within each structure. This level of specificity is important if we want to ask how sex-differences in brain development might be relevant for sex-differences in risk for the emergence of mental health difficulties.”

When researchers looked at the growth trajectories for the amygdala, they found statistically significant differences in the trajectory for volume growth between males and females. While both sexes experienced similar rates of volume growth in early childhood, this growth rate rapidly slowed in females around the age of 13. In males, the most rapid period of deceleration in growth occurred in their late 20s. Although still statistically significant, sex-based differences in the development of the hippocampus were less obvious, with males showing faster increases in hippocampal volume during their late teens compared with females.

When researchers examined the development of different parts of the amygdala and hippocampus, they found that the most prominent sex-biases in development overlay the centromedial nuclear groups (amygdala) and rostro-caudal extremes of CA1 and CA2 (hippocampus)—subregions of the brain thought to be important for affective processing.