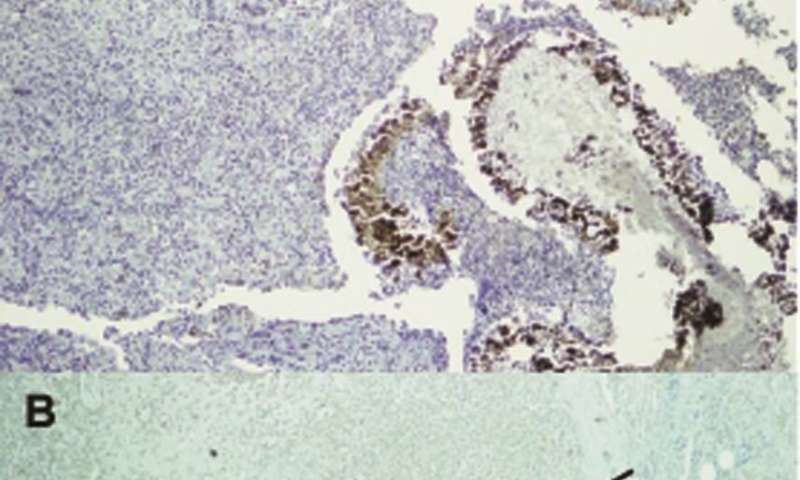 Mycetoma is a common neglected disease caused by either fungi or bacteria which organize themselves into grains—areas of inflammation surrounded by a collagen capsule. Now, researchers reporting in PLOS Neglected Tropical Diseases have studied two immune molecules inside these grains and discovered patterns to where the molecules appear.

Mycetoma is caused by any of 56 different microorganisms and is endemic to many tropical and subtropical areas. It usually affects young adults and children and is most common in farmers and other workers who deal directly with soil. Mycetoma appears as a slow-growing tumor-like mass that gradually increases in size. Previous research has revealed that there are three zones of inflammatory cells surrounding mycetoma grains. However, the immunopathological mechanisms involved in the chronic inflammation of mycetoma have not been well understood.

In the new work, Ahmed Hassan Fahal of the University of Khartoum, Sudan, and colleagues studied surgical biopsies from 100 patients with confirmed mycetoma. They measured expression levels of two immune proteins—interleukin-17 (IL-17) and matrix metalloprotein-9 (MMP-9)—in cells from each zone in the mycetoma grains.

While IL-17 was mostly found in Zones I and II of the grains, MMP-9 was present primarily in the more outer Zones II and III. Levels of the two immune molecules corresponded with each other, and were associated with the disease duration and lesion size. Moreover, levels of MMP-9 also varied by the causative agent of mycetoma. In experiments in mice, animals deficient in IL-17 , granuloma formation was impaired, suggesting an importance of the molecule in early infection.