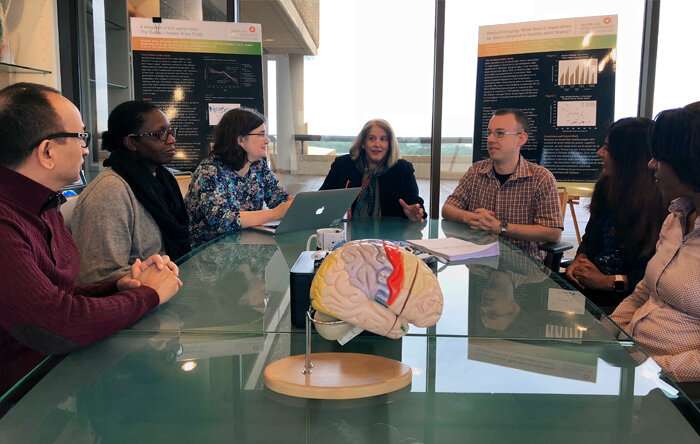 New research from The University of Texas at Dallas suggests that periodic evaluation of changing amyloid levels in certain brain structures may offer an important clue into who may be on a trajectory toward Alzheimer’s disease.

Deposits of a protein called amyloid in the brain are one of the earliest signs that an individual is at high risk for developing Alzheimer’s. The findings, published in the Nov. 6, 2018, issue of the journal Neurology, indicated that early changes in amyloid in posterior cortical regions of the brain were associated with subtle declines in episodic memory—one’s memory for events, times and places that are autobiographical in nature. Declines in this type of memory are known to be one of the first symptoms of Alzheimer’s.

Extensive evidence already indicates that amyloid slowly builds up in the brain over the course of more than a decade before individuals develop dementia.

The research was conducted as part of the Dallas Lifespan Brain Study (DLBS), initiated and led by Dr. Denise Park, director of research for UT Dallas’ Center for Vital Longevity, Distinguished University Chair in Behavioral and Brain Sciences, a UT Regents’ Research Scholar and senior author of the study. Lead author of the study was Dr. Michelle Farrell, who earned her doctorate at UT Dallas in 2017 before recently joining the Athinoula A. Martinos Center for Biomedical Imaging at Massachusetts General Hospital.

Participants in the DLBS have had brain scans four years apart that assess whether the participants have amyloid deposits. Farrell used these data to relate changes in amyloid deposits to changes in memory function in 126 cognitively normal adults ages 30 to 89. The study focused specifically on participants who were initially considered “amyloid-negative” based on a positron emission tomography scan.

By following these participants over four years, the research team was able to detect increases in amyloid in specific regions of the brain. This early relationship between amyloid and memory was even found to be present in adults ages 30 to 59.

“Our findings suggest that even the earliest signs of amyloid have observable consequences for memory, though not to the extent that these individuals would be considered to have dementia,” Farrell said. “It is only by following individuals over time that we are able to observe these subtle shifts in amyloid and memory.”

In 2017, Farrell and Park published a study in JAMA Neurology—also using DLBS data—that found higher amyloid amounts in adults ages 40 to 59 were associated with declines in vocabulary, an area of cognition that is generally preserved as people age. Such findings are leading researchers to believe that Alzheimer’s development might be detected many years before symptoms of cognitive decline become obvious.