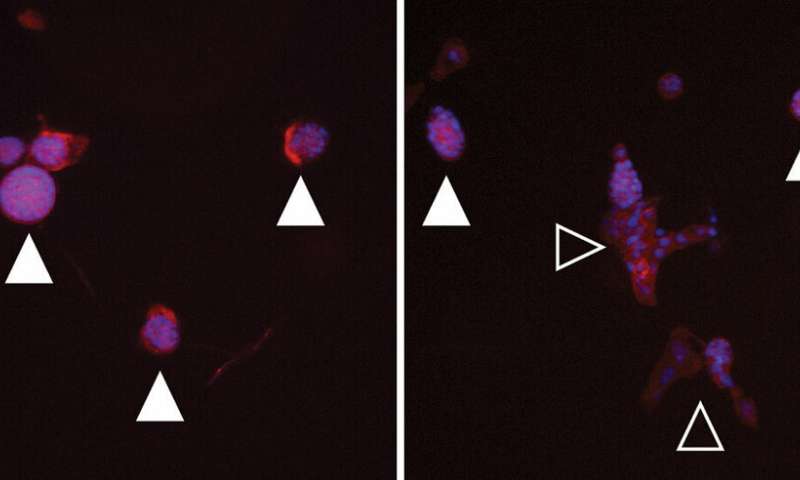 A study provides new insight into how the stiffening of breast tissue plays a role in breast cancer development. By examining how mammary cells respond in a stiffness-changing hydrogel, bioengineers at the University of California San Diego discovered that several pathways work together to promote the transformation of breast cells into cancer cells. The work could inspire new approaches to treating patients and inhibiting tumor growth.

The team reported their findings in a paper published online on Feb. 12 in the Proceedings of the National Academy of Sciences (PNAS).

“By dynamically modulating the stiffness of the microenvironment, we can better mimic what happens during the transformation of breast cells to a malignant state in a dish,” said senior author Adam Engler, a professor of bioengineering at the UC San Diego Jacobs School of Engineering.

The study is part of a growing body of research showing that mechanical forces—not just genetic and biochemical signals—play a key role in the development and spread of cancer. In the past, researchers have found that modeling stiff tissue environments in vitro promoted tumor growth.

But these models often do not fully recreate what’s happening in the body because they are static, Engler noted. “Tissue stiffening is a dynamic process. Mammary tissue doesn’t just start out stiff, this is something that develops over time,” said Engler.

So Engler’s approach was to use a material system in which the stiffness could be tuned dynamically while cells are inside, and then see how the cells respond to that change in stiffness.

“We’re trying to mimic the process of fibrosis during the progression of tumor development,” said Jesse Placone, a postdoctoral fellow in Engler’s lab and a co-first author of the study. “As a tumor site forms, the local stiffness of the tissue increases. And by modeling this dynamic stiffness, our system is significantly more representative of what happens in vivo.”

The team used a hydrogel called methacrylated hyaluronic acid, a soft material that can be stiffened to varying degrees with exposure to free radicals and UV light. They first stiffened the hydrogel enough to mimic the stiffness of normal breast tissue. Then, they cultured mammary epithelial cells in the gel. After the cells matured, the gel’s stiffness was increased to that of a breast tumor. The amount of UV exposure required in this step was not enough to harm the cells, the team noted.

They discovered that stiffening triggers multiple pathways that together signal mammary cells to become cancerous. Key players of these pathways include the proteins TWIST1, TGF-beta, SMAD and YAP.

“In a dynamic environment, we found that these different pathways act cooperatively. It’s not enough to inhibit just one of those pathways as was previously shown in studies modeling static, stiff environments,” said Engler. “From a clinical perspective, this suggests that a single drug approach may not work for all patients with breast cancer tumors.”

The team also discovered that a subpopulation of mammary cells do not respond to stiffening. Engler says this is good news for women as fewer cells than previously thought may turn into cancer as a result of the environment alone. Such a result, if it translates to patients, could mean fewer or smaller primary tumors.