Alzheimer’s disease (AD) is a disturbing experience to watch, even for adults. For children, it can be far worse as their beloved grandpa forgets them, acts oddly, or changes his personality. It is important to explain this to the children so they can understand what is happening and work with or around it, rather than feel ashamed of the AD-affected relative, guilty for being ashamed, depressed, and confused. 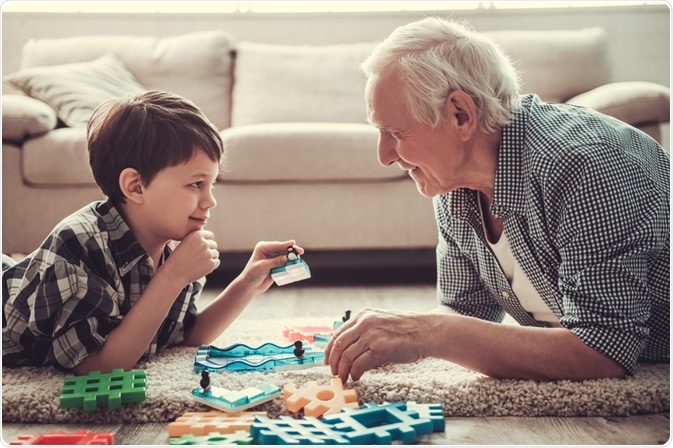 AD is a progressive neurodegenerative disease, often associated with the formation of abnormal deposits of beta-amyloid protein, as well as tangles of the neurofibrillary protein called tau. The primary manifestation of this condition is cognitive impairment, involving memory loss, reduced thinking skills, difficulty in finding words to communicate, poor reasoning and judgment, and eventually a loss of independence.

Symptoms typically occur in the mid-60s, and the condition is then called late-onset AD (LOAD), in contrast to early-onset AD (EOAD) that comes on between the 30s and mid-60s. In either case, the loss of synaptic connections is fundamental since these junctions mediate the transmission of nerve impulses between brain regions as well as from the central nervous system to other parts of the body.

Brain damage in AD occurs first in the hippocampus, spreading to additional regions. Since the hippocampus is concerned with memory formation, dementia symptoms, that is, the loss of memory is an early and concerning symptom. The brain shrinks physically to a significant extent by the time AD is advanced, due mainly to neural death.

In early AD, mild cognitive impairment is common, but this is not a specific marker of AD. People with AD do find it more and more difficult to drive, cook or pay bills. Things get mislaid and not found, and life becomes extremely confusing. Many such individuals develop anxiety, anger, or even violent behavior.

The time from diagnosis to death may vary from 3-4 years to 10 years or even more, depending on the age of the patient at the time. Some scientists think that AD is the third leading cause of death in the USA among older people.

Children are especially prone to being troubled and distressed by the obvious changes in the personality of their older relatives as a result of AD. Thus, telling children about AD depending on their age and ability to understand is an important coping tool.

Some essential steps towards helping children understand what is happening when an elderly family member gets AD include:

Being ready to answer questions: while all the questions a child has about the AD patient may not be susceptible to perfect or simple answers, honesty is important, as is a down-to-earth approach to describing what the patient’s problems are (such as difficulty remembering things, or a loss of social inhibition) while ascribing them to the underlying medical condition.

Explain that some diseases don’t show any visible outside signs but are still producing big changes inside the person’s brain. This is especially so when the person with AD becomes confrontational or wrongly accusatory. In such a situation, the child should be taught not to respond, out of concern for the other’s emotional health, but instead to quietly withdraw if possible.

Acknowledging and validating the feelings of sadness and anger the child may feel if the person involved played a major role in their affections. It is necessary to remain alert to non-verbal changes in children that indicate a sense of worry, grief, and/or anger.

It may help to explain that the love is still there deep inside the person but the disease makes them forget people and things. At the same time, the child’s love is very much perceptible to and welcomed by the AD relative.

At the same time, it is probably not wise to dump one’s feelings on the children.

Providing comfort and alleviating concerns that they somehow caused it to happen, by explaining that it is a disease caused by a brain condition, and not by any person.

It is possible that children or adolescents do not like to spend time with a person who has AD. In other cases, the child may be embarrassed because it is not clear how or what they can do with the other person. Pointing out some things they can do to enjoy time spent with such a relative can go a long way in easing the strain.

This could include making or sewing something, singing, playing favorite songs or pieces of music, watching photos, and reading out loud. Modeling such involvement is also important.

At the same time, it’s wise to keep from forcing too many care chores for a relative with AD on children. While welcoming or even encouraging them to help out, they must have the time they need to play, participate in group and school activities, study and do homework, or just follow some of their own interests.

If the caregiver for a relative with AD has children, they must always be able to feel that they are a high priority for their parent despite the need to provide care for the patient. Taking advantage of respite care facilities where the AD relative can be placed for a short period, if possible, is an important way to reconnect with one’s family if the degree of care required by the AD patient is very high.

The children should know that eventually the person may become more difficult, more ill, or die. Asking about changes the child has observed is a good way to take this conversation forward. While listening to these fears and concerns, it is also good to continue to focus on what can be done to help the person rather than encouraging self-absorption, while keeping in close touch with the child’s feelings.