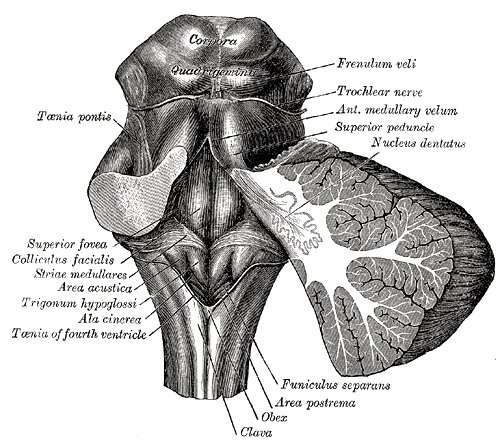 The locus coeruleus, literally the “blue spot,” is a tiny region in the brainstem. As the main source of the neurotransmitter norepinephrine, it has a great influence on whether our memory continues to work well in old age. Using magnetic resonance imaging (MRI) and novel analysis methods, researchers at the Max Planck Institute for Human Development and the University of Southern California have been able to show that a healthier locus coeruleus is associated with better memory performance in later adulthood. Their findings have been published in Nature Human Behaviour.

Why do some cognitive abilities—especially memory—decline in the course of adulthood? And why can some older people still learn new information and remember it, while others cannot? To answer these questions, cognitive neuroscientists in the last decades have mainly concentrated on the cortex and the hippocampus, which plays a central role in learning and memory.

Recently, however, the locus coeruleus, a tiny cell structure that is located in the brainstem, deeply hidden under the cortex, has attracted researchers’ attention. This nucleus is only about 15 millimeters in size and linked to most other areas of the brain through an extensive network of nerve fibers. The nucleus is made up of neurons that are the main source of the neurotransmitter norepinephrine. As a so-called neuromodulator, norepinephrine regulates the communication among neurons and thus contributes significantly to the control of stress, emotions, and attention. Additionally, animal studies have shown that norepinephrine supports restructuring processes on the cellular level, allowing for the long-term storage of new memories, skills, and knowledge. Therefore, successful learning and memory processes are likely to depend on the intact functioning of locus coeruleus.

As people age, the locus coeruleus reveals increasing signs of decline that are probably due to the accumulation of toxins from the bloodstream and the liquid surrounding the brain and the spinal cord. Recent research findings also suggest that Alzheimer’s disease pathology may first appear in the locus coeruleus, and spread from there to memory-related brain regions before eventually reaching throughout much of the rest of the brain in later stages of the disease.

“Recent studies examining dead brain tissue indicate that one of the key pathological indicators of Alzheimer’s disease can be found in the locus coeruleus of most people by the time they are middle aged. The current findings are among the first to show a link between cognitive function and the integrity of the locus coeruleus in living humans,” says Mara Mather, professor of Gerontology at the University of Southern California and coauthor on the study.

Markus Werkle-Bergner, Senior Scientist at the Center for Lifespan Psychology at the Max Planck Institute for Human Development, adds: “Previous animal studies suggested a relationship between a healthier locus coeruleus and better learning and memory. It is therefore important to examine whether aging-related changes of the locus coeruleus are related to memory decline in old age in humans as well.”

Due to its small size and its location deep in the brainstem, it was previously almost impossible to investigate this nucleus in a living person. Thanks to new MRI scanning procedures and novel analysis methods, this brain region can now be visualized non-invasively. With these new methods, the researchers closely investigated the locus coeruleus of 66 younger and 228 older people aged 33 years respectively 72 years on average. All of the participants also took part in a series of neuropsychological memory tests within the Berlin Aging Study II (BASE-II). For example, the participants had to memorize a list of 15 words over several rounds, and then recall them.

“The locus coeruleus is a very sensitive part of the brain. Our findings suggest that aging-related impairments of its structure and functioning have far-reaching consequences for attention and memory. Future longitudinal studies need to examine whether disease-related processes accelerate the aging of locus coeruleus—and if so, how we can detect the beginning in individuals,” says Martin Dahl, first author of the study and predoctoral researcher at the Center for Lifespan Psychology, Max Planck Institute for Human Development.