Dieters, reach for the nuts this Christmas! Almonds should be the go-to snack for people watching their weight because they don’t release as much fat into the body, nutritionists say

They’ve traditionally been cut from diets because of fears their high calorie and fat content will make people fat.

But nutritionists now say you don’t need to have a guilty conscience if you tuck into nuts – especially almonds – this Christmas.

Experts at King’s College London claim that while nuts do pack a lot of energy, the calories are not absorbed by the body.

Tests have shown as much as 20 per cent of fat in nuts, and a quarter of the calories, do not get absorbed. 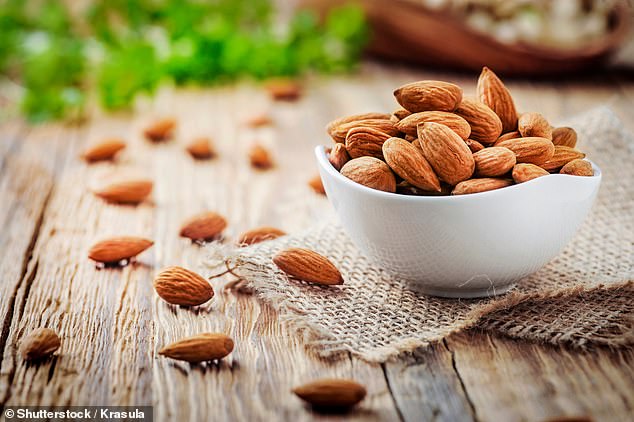 Although up to 55 per cent of almonds is fat, past research suggests as much as 20 per cent of this is not absorbed when the nut is eaten whole, rather than as a flour (stock)

Dr Sarah Berry, of King’s department of nutritional sciences, said: ‘Our research shows how important it is to look past food labels on some foods.

‘What is displayed in terms of fat and calorie content may not accurately reflect what actually happens once consumed.

‘Nuts are a great example of this and it is crucial we move away from the long-held belief that they are full of calories and make us gain weight.

‘Indeed, we have shown these to be a great snack choice, holding numerous benefits for our gut and cardiovascular health.’

In the recent KCL study, scientists compared fat absorption after eating a muffin made with trendy almond flour with one containing small nut pieces.

They found fat remains trapped within an almond’s structure throughout digestion and does not get absorbed.

When the nut is ground into a flour, however, its structure is broken down, which makes its fat more accessible and readily absorbed.

The researchers ground almonds in a coffee grinder into both small pieces and a flour consistency. Ground almonds are often added to gluten-free cakes as a flour replacement or to make baked goods ‘healthier’.

Some 85g of either the almond pieces or the flour was then added to a muffin recipe, with the remaining ingredients being the same between the two types of muffin.

Snacking on walnuts, peanuts, pecans or any other variety staves off obesity-related conditions like heart disease and type 2 diabetes, scientists from Harvard claimed.

Nuts are rich in unsaturated fats that make people feel fuller – stopping them piling on the pounds – and keep blood sugar, insulin and cholesterol levels in check.

They are also packed with fibre, protein, vitamins and minerals – including folate, vitamin E, potassium and magnesium.

The findings from two separate studies presented at an American Heart Association conference in Chicago add to evidence that nuts can control weight and boost health.

Both of the muffins were served with low-fat custard to encourage the participants not to chew too much and break the almonds down further.

Once the muffins had been chewed, but not swallowed, by some volunteers, they were added to a gastric model that simulates human digestion.

This allowed the researchers to test the samples at different times throughout the digestion process.

Results showed 57 per cent of the fat within the small almond pieces was digested compared to 97 per cent in the almond flour.

In a second part of the experiment, the researchers recruited volunteers who had their lower bowels removed and stomas fitted following cancer, ulcerative colitis or Crohn’s disease.

The stomas allowed the scientists to take fluid from the participants’ guts to measure its fat and sugar levels.

Eating the almond flour also resulted in a 61 per cent more fat circulating in the participants’ bloodstreams compared to those who ate the nut pieces.

When the almond particles were examined under a microscope, the researchers found parts of the fat remained trapped within the nut.

Less fat was trapped in the almond flour, which may be due to its structure being broken down, which makes the fat more accessible.

The study was carried out Dr Terri Grassby, who now works at the University of Surrey. It was published in the Journal of Functional Foods.