Women may have the advantage over men when it comes to brainpower.

The discovery may help to explain why women tend to stay mentally sharp longer than men in their later years. 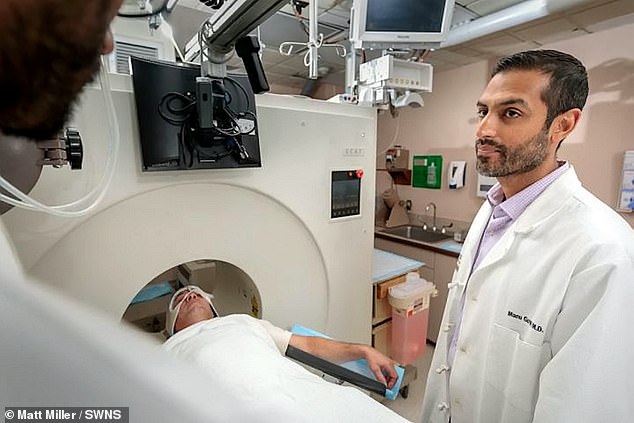 Manu Goyal, MD oversees a brain scan during his study at Washington University School of Medicine in St Louis which found that women’s brains appear to be three years younger than men’s of the same age

That is based on their use of glucose, and how it is burned for energy, which can affect brain performance.

It was already known that men’s brains shrink faster with age than women’s, but the new results suggest their brain metabolism is different too.

It may explain why older men see a bigger drop in their memory and language skills than women, whose younger brains may protect them from forgetfulness for longer.

Dr Manu Goyal, who led the study from the Washington University School of Medicine in St Louis, said: ‘We’re just starting to understand how various sex-related factors might affect the trajectory of brain aging and how that might influence the vulnerability of the brain to neurodegenerative diseases.

‘Brain metabolism might help us understand some of the differences we see between men and women as they age.’ Researchers compared 205 men and women’s actual age to the age of their brain based on its use of glucose and oxygen as fuel.

As we get older, our brains burn less glucose to power brain development and more to complete everyday tasks and mental challenges.

A computer algorithm found women used a higher proportion of glucose to develop their brain, showing their brains were younger.

This was the case even among the youngest women, according to the researchers writing in the journal Proceedings of the National Academy of Sciences.

Dr Goyal said: ‘It’s not that men’s brains age faster – they start adulthood about three years older than women, and that persists throughout life.

‘What we don’t know is what it means. I think this could mean that the reason women don’t experience as much cognitive decline in later years is because their brains are effectively younger, and we’re currently working on a study to confirm that.’

The researchers are now following a group of adults as they age to see whether people with younger-looking brains are less likely to develop thinking problems.