The warnings began soon after I had my first child, Mara. I was 34, a year shy of being medically classified a ‘geriatric mother’ – the age at which the risk of pregnancy complications begin to multiply.

The term, at the time, seemed almost comically archaic, and not reflective of the fact that women in their 40s are now more likely to give birth than those in their teens. Figures released just last week show that more than one out of every 25 new mothers is now in her 40s.

I felt young, and healthy. I looked young (so I thought!). Not geriatric by any stretch. But people had started making comments like: ‘You’d better get going again, unless you want Mara to be an only child.’

I know how annoying it is to be lectured about fertility. 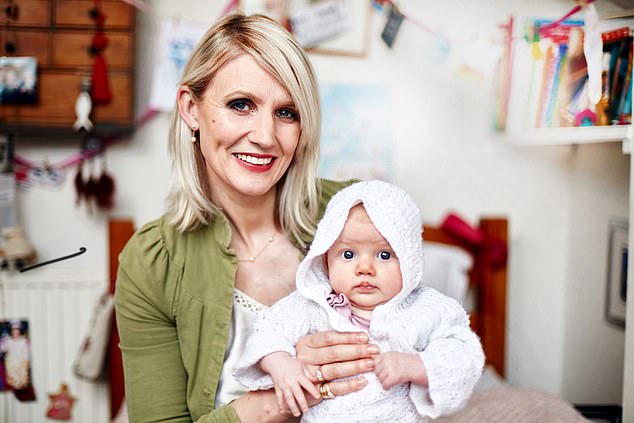 My response? An eye roll and an inward recap of all the reasons why it wasn’t the right time for a second child: job loss, a bad patch in my marriage, the death of my father. Besides, if I was fertile in my early 30s, a few years’ delay wouldn’t make much difference, would it? How wrong I was.

Three months ago – at 44 – I did finally have a baby. I can’t believe Elena is here. I am so thrilled I don’t even feel tired. But the past five years of my life have been lost to a horrible rollercoaster of desperate longing, dashed hopes, miscarriage, fertility drugs and pain – both physical and emotional.

As pregnancy rates in every other age group fall, the number of women conceiving, like me, in their 40s has leapt over the past 30 years, from about 12,000 in 1990 to almost 29,000 a year now. And I’ll go down as another statistic that makes having a baby in your 40s seem relatively straightforward.

But these figures hide the fact that older women are no more fertile than they ever were. I soon discovered late motherhood often comes with a painful backstory. In my case what I’d taken for granted a few years earlier had become virtually impossible.

That’s why my message to younger women is: Please don’t wait. Don’t go through what I did.

There is never a perfect time. We mended our marriage, my career continued, I recovered from the loss of my father. It turned out anything was possible except having a baby.

I was 39 when my husband and I began trying for a second child. Nothing happened. Six months and then a year passed. Still nothing.

As any woman who is hoping to get pregnant will know, a year of trying is a long time. And the panic grew. Had I left it too late?

And so, I found myself in one of Britain’s largest assisted conception units at Guy’s Hospital in London. Where Mother Nature could no longer deliver, modern science would step in, surely?

Lots of women clearly had the same thought, as a third of the female patients at Guy’s ACU are over 40. But, though there have been increased IVF success rates, senior consultant gynaecologist Tarek El-Toukhy explained: ‘It’s non-age-related fertility issues that on the whole we’re getting better at treating. If ovaries and eggs are ageing, there’s much less we can do.’

The statistics back this up. Just over 33 per cent of women under 35 end up with a baby after one round of IVF. But for women over the age of 42, the ‘live birth rate’ drops to less than ten per cent. This falls below two per cent for women over 44, as egg quality diminishes with age, making implantation in the womb less likely. Small wonder I cycled home from the clinic on that first day in tears.

I was nearly 41 when I started my first round of IVF. I knew the odds were drastically stacked against me, but I hadn’t factored in just how unpredictable our reproductive systems can be. 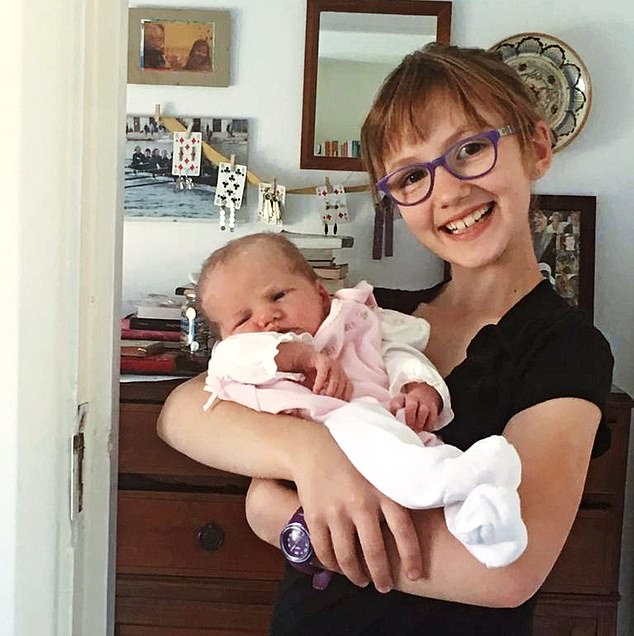 Elena with her big sister Mara

After a year of fertility treatment I’d been pregnant three times, but I still didn’t have a baby.

There was the whoosh of adrenaline when a test came back positive and the delicious sense of anticipation that accompanied swollen breasts and surging hormones.

Then came the crash. Crying, bleeding, cramping, and a pain I’d never experienced before, a nagging ache for a vital presence that was no longer there.

At any age, pregnancy loss can feel devastating, but it is particularly cruel when you are sub-fertile – or ‘over the hill’, as one relative put it. Sadly he had a point – my ectopic pregnancy, when the embryo implants outside the womb, and an 11-week miscarriage were almost certainly due to my advanced age. Obstetrician Roger Smith, an expert in IVF at King’s College Hospital, London, is matter-of-fact. ‘For a woman aged 40, miscarriage in the first trimester occurs in about 38 per cent of cases and that rises to 70 per cent in a 45-year-old.

‘It becomes harder to achieve an established pregnancy over 12 weeks because poor egg quality often leads to chromosomal abnormalities in the embryo.’

I wasn’t alone. I saw women my age waiting grim-faced for IVF consultations they could ill afford, or doubled up in hospital corridors, sobbing silently at yet another loss. One friend had seven miscarriages before she finally gave birth to her second child aged 45.

Mr Smith says many women he treats over 40 who achieve a live birth do so with eggs from a much younger donor – even if they don’t admit it. ‘There is a tendency for people, especially if they are high-profile, not to be entirely honest about how they got pregnant.’

Amazingly, after two rounds of IVF, I got pregnant and remained so beyond 12 weeks. I was high as a kite, invincible, overjoyed.

But then I caught listeriosis, a bacterial infection from food.

In my second trimester, two months shy of my 42nd birthday, I had a late miscarriage. My tiny son had died inside me. I now know where the expression ‘climbing the walls’ comes from.

I flung myself around, groping, calling, crying for my boy. Even my IVF gynaecologist, who deals with grief on regular basis, wept – no doubt sensing the impossibility of me ever getting pregnant again.

Most women agree that the only way to truly overcome such a loss is to have another baby. So I kept trying.

If you know the joy that a baby brings, perhaps you’ll be able to imagine the pain at not being able to have one.

Like many women in my situation, I experienced emotions I hadn’t known existed within me – fear, isolation, desperation, envy.

I avoided mums with prams, steered clear of sibling groups at the school gate and fought a daily swell of self-loathing that came with the growing knowledge that my predicament could so easily have been avoided just a few years earlier. How I wailed for what I’d lost – the ability to create and nurture new life. I was a woman apparently in the prime of her life, but I couldn’t have a baby. I wasn’t able to give my husband a second child, nor gift my daughter a sibling.

I never imagined I’d be that woman, pounding my way through numerous cycles of IVF in search of a perfect egg. But, at the ripe old age of 43, in the face of diminishing odds and limited funds, that was me.

Infertility cost me friendships, work and a lot of money: seven rounds of IVF, totalling £32,000. Holidays are a thing of the past and we no longer have a car. But, eventually, I did strike gold. I’d stopped treatment, but had one remaining frozen embryo from my sixth cycle – and that embryo became baby Elena.

You can take from my story that nowadays anything is possible. If you’re in your 40s and where I was two years ago, that’s probably the message you need to hear, and I wish you all the luck in the world.

But if you are a decade younger, please bear in mind that had Elena not arrived, this article would have been too painful to write.

Rather than pink congratulation cards, there would have been quiet mutterings: ‘How could she be so foolish. Spending all that money when she already has a child.’

Yet now nobody looks at Elena and tells me she wasn’t worth it.

We tend to only hear about miracle births. Society likes winners; failure and loss are far harder to share. Sadly the result is a distorted impression of what’s possible.

When Elena finally became an established pregnancy at 12 weeks, I was terrified and exhausted throughout the remaining six months.

I got pregnant exactly ten years after the conception and birth of my first daughter, but the two experiences were incomparable.

Fully aware of the increased chance of birth defects and chromosomal abnormalities in older women, I never slept the night before a neonatal scan.

With much lower energy levels, work proved an uphill struggle.

Mr Smith confirms the risk to older mothers is higher during pregnancy, and that includes the chance of maternal death. ‘We see age-related problems like heart disease appear in 45-year-olds that we wouldn’t in a younger woman,’ he says.

I was lucky. My pregnancy with Elena turned out to be incident- free but when my team confirmed I had a low-lying placenta, I was quick to agree to a caesarean.

It is a major operation that often leaves the mother unable to move freely for weeks, sometimes months, and yet proportionally it’s older women who are more likely to opt for one.

With my first child, I had a home birth minus pain relief. Back then, I was so blase, I even made a film about the experience.

After a five-year struggle, Elena’s birth was always going to be a joyous occasion, and so it proved. But having a baby later in life is a very different experience.

My dad is now dead, my mum has poor sight; Elena’s cousins are much older, as are most of my friends’ children; so care options and Elena’s access to extended family are reduced.

Sure, I pinch myself every day – I’ve won the lottery of life. But it didn’t need to be that hard.