Weaponry from NORTH KOREA, fresh fish and £3,000 in a will: Investigation reveals some of the strangest gifts nurses receive from their grateful patients

Weaponry from North Korea and a whopping £3,000 in a will are some of the most bizarre gifts nurses in the NHS have received.

Nurses across the UK received a total of 335 presents from grateful patients between January 2016 and October 2018.

The presents, which also included fresh fish, were worth almost £30,000 in total, freedom of information requests showed. 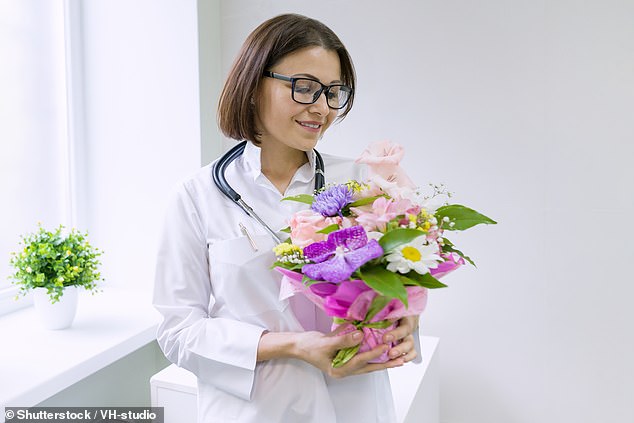 The items were revealed in a Nursing Standard probe, which gathered information from the gift registers of 148 UK trusts and health boards.

Many items were often ‘blessings’ in another culture, as patients went above and beyond to show their gratitude.

Another, who works at the Pennine Care NHS Foundation Trust, received 12 bottles of red wine from the mother of a patient.

A team of nurses in Greater Manchester were given a new toaster for their ward by a patient.

While a hospital manager at the East Kent Hospitals University NHS Foundation Trust was surprised to unwrap weaponry.

WHAT WEIRD AND WONDERFUL ITEMS WERE NHS STAFF GIFTED?

Many strange items were recorded by NHS staff in the investigation, including:

• A patient’s kilt, Newcastle upon Tyne Hospitals NHS Foundation Trust. Comment from staff member who received it: ‘The patient was very insistent that I accept despite several attempts to decline his kind gesture’

• Gift of turkey and goose from a patient, Lancashire Care NHS Foundation Trust

The unnamed member of staff said the silver imitation ceremonial weaponry was given by a ‘North Korean VIP visiting for a language course in 2016’.

More than 40 per cent of gifts were over the value of £50 – the price at which staff are required to make note.

Of the £29,973.15 worth of declared gifts given to nurses, nearly a third came from three instances in which nurses were left large sums of money in wills.

In one instance, a group of five nurses at Oxleas NHS Foundation Trust’s Barnard Health Centre each received £1,000 in February 2017.

Investigations followed, but the motivation for the payment was never uncovered.

A trust spokesperson confirmed the will in which the payment was bequeathed was created in 2001, and there was no evidence that the benefactor had even been a patient there.

The trust’s director of nursing Jane Wells said it demonstrates the impact that nurses can have on people who have had a difficult time.

She said: ‘The individual may have had some connection with nursing services in the past, which she wanted to commemorate, or it could have been a random act of kindness.

‘However, care offered by nurses must have had a positive impact on the individual at some time in her life, which is heart-warming.’

The two other will payments, for £3,000 and £1,000, were received by individual nurses in Bolton NHS Foundation Trust and Maidstone and Tunbridge Wells NHS Trust respectively.

The cheapest present recorded was a £1.20 box of Maltesers chocolates, given at Cambridgeshire and Peterborough NHS Foundation Trust.

Although the mounting treats can be a detriment to nurses waistlines, it isn’t a concern for hard-working staff.

Nursing and Midwifery Council rules state a nurse must ‘refuse all but the most trivial gifts, favours or hospitality as accepting them could be interpreted as an attempt to gain preferential treatment’.

Cash almost always has to be declined and either returned or offered to a charitable cause.

Gifts with a ‘low intrinsic value’ such as diaries, pens, chocolates and biscuits are commonplace on wards.

Health leaders have today said although Christmas presents are appreciated, they cannot accept everything.

A Royal College for Nursing spokesperson said: ‘It’s commendable, in the run-up to Christmas, that many people want to show their appreciation with a gift, knowing that many nurses will spend Christmas Day in work rather than round the dinner table with their families.

‘We would ask anyone who has bought a gift for NHS staff to not be offended if nurses feel that it’s best to politely decline anything that might be considered more than trivial.’

An investigation in August last year also found cash in envelopes, a trout, origami sets, scarves, a Rolex watch and a garden hose are among gifts.

One member of staff received £200 towards their brother’s operation in the Philippines, which they were able to accept.