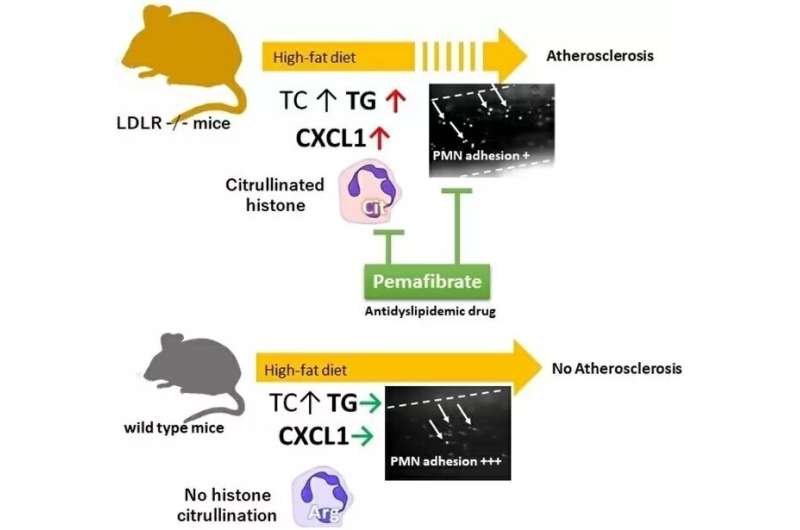 It’s long been known that a high-fat diet can lead to clogged arteries, but we have only recently begun to learn in detail how the process works. A new study in experimental mice could go a long way to finding treatments to keep arteries open and flowing.

In a study published this month in JACC Basic To Translational Science, researchers from Tokyo Medical and Dental University (TMDU) have continued their research into how a high-fat diet causes atherosclerosis, the fatty buildup of plaques on the walls of blood vessels that can lead to heart attacks and other vascular disease. Atherosclerosis is not as simple as fats getting stuck in your arteries—it’s actually an inflammatory disease driven by the body’s own immune response, particularly neutrophils, the white blood cells that attack infections and respond to injuries.

Normally, neutrophils act to regulate the immune response, so that inflammation can resolve the problem allowing the body to return to its normal state. But when a stimulus is persistent, the immune response can shift strategies, becoming a long-term chronic condition.

“We applied this theory to what happens in atherosclerosis—in this case, the persistent stimulus is dyslipidemia (unhealthy levels of fats and cholesterol in the blood),” says lead author of the study Mizuko Osaka. “So detailing the role of neutrophils in acute inflammation can help us understand how it becomes chronic inflammation.” 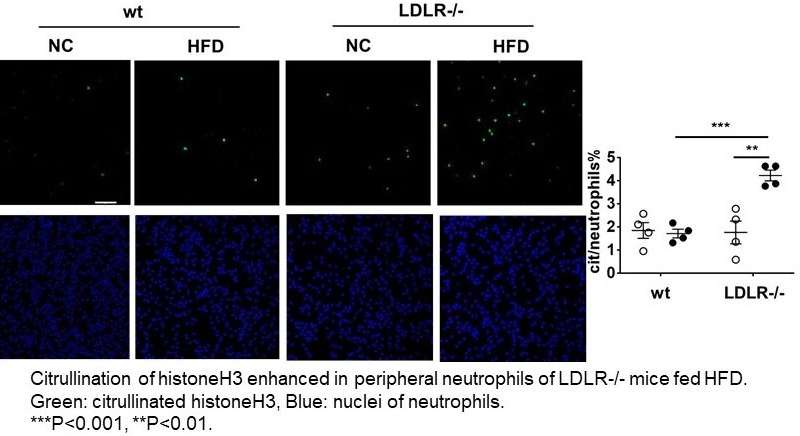 The group compared a group of regular wild-type mice against mice specially bred to genetically lack low-density lipoprotein (LDL) receptors on their cell membranes. This is because mice carry most plasma cholesterol in high-density lipoprotein and overall have far lower cholesterol levels; lacking these receptors means these lab mice metabolize LDL (the “bad” cholesterol) more like humans do. When fed a “humanized” high-fat diet, these mice developed high triglycerides and cholesterol, showed significantly increased levels of neutrophil adhesion to their blood vessel walls, and experienced much more inflammation.

“On the basis of certain biomarkers in the LDLR-null mice, we suspected that neutrophil extracellular traps (NETs, which help trap and eliminate pathogens from the body) could be involved in activating neutrophils,” explains Masayuki Yoshida, senior author of the study. “And indeed, we found enhanced citrullination of histone H3, a known marker of NETs, in these mice. Going further, we specifically identified plasma levels of CXCL1 (a peptide that acts to attract immune cells to the site of an injury or infection) to be significantly increased in the LDLR-null mice after 7 days and 28 days of the high-fat diet.”

This suggests that CXCL1 is the link between the high-fat diet and citrullination, part of the process of making NETs—and which leads to neutrophils forming plaques on the blood vessel walls when overstimulated in the long term. In fact, blocking the citrullination process led to a reversal of the increased neutrophil adhesion from the high-fat diet.