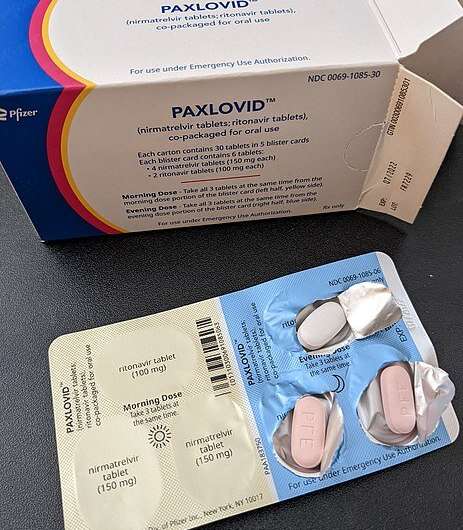 Paxlovid is the latest COVID-19 treatment that’s been all over the news. The drug was granted an emergency use authorization (EUA) by the Food and Drug Administration (FDA) in December for anyone ages 12 and older who weighs at least 88 pounds—and Pfizer recently began Phase 2 and 3 trials in children and teens ages six to 17.

Paxlovid is an oral antiviral pill that can be taken at home to help keep high-risk patients from getting so sick that they need to be hospitalized. So, if you test positive for the coronavirus (and your doctor writes you a prescription), you can take pills at home and lower your risk of going to the hospital.

The drug, developed by Pfizer, appears to have a lot of positives: It had an 89% reduction in the risk of hospitalization and death in clinical trials, a number that was high enough to prompt the National Institutes of Health (NIH) to prioritize it over other COVID-19 treatments; it’s cheaper than many other COVID-19 drugs (it’s provided for free by the U.S. government while there is a public health emergency); and, perhaps most reassuring, it is expected to work against the omicron variant.

“I think it is the beginning of a ‘game-changer,'” says Scott Roberts, MD, a Yale Medicine infectious diseases specialist. “It’s really our first efficacious oral antiviral pill for this virus. It shows clear benefit, and it really can prevent hospitalization and death in people who are at high risk.”

It’s important to note that Paxlovid (the brand name for the drug, which is made up of two generic medications—nirmatrelvir and ritonavir) isn’t the only pill available to treat COVID-19. The FDA also granted an EUA in December to a pill from Merck called molnupiravir (Lagevrio), but some studies suggest that molnupiravir has only a 30% reduction in the risk for hospitalization and death from COVID-19.

And as far as convenience, this medication is considered an improvement over treatments like remdesivir (approved by the FDA in October 2020), which is administered by intravenous (IV) injection.

We asked Yale Medicine infectious diseases experts common questions about Paxlovid. Below are their responses.

1. How does Paxlovid work?

Paxlovid is an antiviral therapy that consists of two separate medications packaged together. When you take your three-pill dose, two of those pills will be nirmatrelvir, the drug that inhibits the SARS-CoV-2 protein from replicating. The other is ritonavir, a drug that was once used to treat HIV/AIDS but is now used to boost levels of antiviral medicines.

As a COVID-19 treatment, ritonavir essentially shuts down nirmatrelvir’s metabolism in the liver, so that it doesn’t move out of your body as quickly, which means it can work longer—giving it a boost to help fight the infection.

2. When should I take Paxlovid?

You have to take Paxlovid within five days of developing symptoms.

Like all antivirals, Paxlovid works best early in the course of an illness—in this case, within the first five days of symptom onset, says Jeffrey Topal, MD, a Yale Medicine infectious diseases specialist who is involved in determining COVID-19 treatment protocols for Yale New Haven Hospital patients.

“Once you’ve been ill with the virus for more than a week, the damage done to the body in a severe case can’t be undone by the antiviral,” he says.

3. How often do I take Paxlovid?

You take three Paxlovid pills twice a day for five days for a full course that adds up to 30 pills. It helps that the pills are packaged in a “dose card,” basically a medication blister pack that allows you to punch out the pills as needed.

4. Is Paxlovid similar to Tamiflu?

“I think it’s a good comparison,” says Dr. Roberts. Tamiflu is an antiviral drug that reduces flu symptoms. Both are prescription-only oral antiviral pills given early in illness.

Tamiflu is taken twice a day for five days, and it must be started within 48 hours of flu onset. “When you give a patient Tamiflu beyond that, it doesn’t really change the course of their flu,” Dr. Roberts says.

But there are also differences between the two, starting with the way they were studied, Dr. Topal adds. Researchers showed that Paxlovid can prevent hospitalization and death. But since influenza causes fewer severe cases, clinical trials focused on whether Tamiflu could shorten the length of flu illness—which it did, he says.

5. Can anyone get a Paxlovid prescription?

The FDA authorized Paxlovid for people ages 12 and older who weigh at least 88 pounds. But in order to qualify for a prescription, you must also have had a positive COVID-19 test result and be at high risk for developing severe COVID-19.

That means you must either have certain underlying conditions (including cancer, diabetes, obesity, or others) or be an older adult (more than 81% of COVID-19 deaths occur in people over age 65). The more underlying medical conditions a person has, the higher their risk for developing a severe case of COVID-19, according to the CDC.

The hope is that the restrictions will be relaxed over time. The FDA granted the EUA in December, just as a staggering number of people were infected with omicron and the need for care skyrocketed, leading to supply issues.

However, the supply has improved so that patients who meet the criteria for Paxlovid can now easily receive it, adds Dr. Topal.

6. How well does Paxlovid work?

When it applied for FDA authorization, Pfizer presented data from a clinical trial conducted in 2021. The data showed that participants who were given Paxlovid were 89% less likely to develop severe illness and death compared to trial participants who received a placebo. (While the recommendation is to take Paxlovid within five days of symptom onset, participants in the clinical trial took the drug within three days.)

Scientists will continue to study the drug’s effectiveness as it is used to treat patients in the real world.

7. What do we know about how Paxlovid works in kids?

Pfizer launched a clinical trial in March to study the safety and efficacy of Paxlovid in children and teenagers ages 6 to 17 who have COVID-19 symptoms and test positive for the virus, and who are neither hospitalized nor at risk for severe disease.

While Paxlovid is authorized for use in adolescents and teenagers ages 12 and up, and weighing at least 88 pounds, that age group wasn’t tested in the original clinical trial. But because many children reach 88 pounds—considered to be an adult weight—the FDA has allowed extensions of EUAs for medications such as monoclonal antibodies and remdesivir in younger age groups, adds Dr. Topal.

“Based on the pharmacokinetics of the drugs in Paxlovid, the differences in metabolism and excretion—liver and kidney function specifically—of these drugs in this age group are thought to be similar to that of adults,” Dr. Topal says.

8. Does Paxlovid work against omicron?

Paxlovid’s clinical trials took place before omicron became predominant, but Pfizer says the drug works against the highly contagious variant. So far at least three laboratory-based studies claim to back this up—two of those studies were conducted by Pfizer, while the third was done by Pfizer in partnership with the Icahn School of Medicine at Mount Sinai. These studies have not yet been published in peer-reviewed medical journals.

9. What are the side effects from Paxlovid?

Most people who take Paxlovid should not experience serious side effects, explains Dr. Roberts. “Paxlovid is usually very well-tolerated,” he says. Common side effects, which are usually mild, include:

Since Paxlovid is cleared by the kidneys, dose adjustments may be required for patients with mild-to-moderate kidney disease, explains Dr. Topal. “For patients with severe kidney disease—or who are on dialysis—or those with severe liver disease, Paxlovid is not recommended; the levels of the drug can become too high and could cause increased side effects,” he says. “For these patients, molnupiravir may be another oral option for treatment.”

It’s worth noting that Paxlovid is still being studied, so it is possible that all of the risks are not yet known. (The FDA has provided a fact sheet on Paxlovid with a full list of known side effects.)

10. Can I take Paxlovid if I’m taking other medications?

There is a long list of medications Paxlovid may interact with, and in some cases, doctors may not prescribe Paxlovid because these interactions may cause serious complications.

The list of drugs that Paxlovid interacts with includes some organ anti-rejection drugs that transplant patients take, as well as more common drugs like some used to treat heart arrhythmias. Paxlovid also decreases the metabolism of anticoagulants, or blood thinners, that many older adults depend on, driving up levels of those medications in the body to a point where they are unsafe, Dr. Topal explains.

It also interacts with cholesterol-lowering medications like Lipitor, but that’s less challenging for patients to overcome. “If you stop taking your Lipitor for five days, nothing bad is going to happen,” he adds.

If you are pregnant or breastfeeding, the FDA recommends discussing your options and specific situation with your health care provider, since there is no experience using the drug in these populations. If you could become pregnant, it’s recommended that you use effective barrier contraception or do not have sexual activity while taking Paxlovid.

11. If I’m not eligible for Paxlovid, is there something else I can take?

For those who are unable to received Paxlovid—perhaps because it would interact with another medication—there are other alternative therapies, such as molnupiravir, the other oral medication, as well as sotrovimab and remdesivir, which are IV medications.

The NIH recommends the following treatments, in order, for people at risk for severe disease:

But comparisons or rankings such as these are tricky, adds Dr. Topal. “None of these drugs were studied head-to-head or with the same variants,” he says.

And then there is the matter of availability and resources. “Remdesivir, for example, requires three days of IV therapy in the outpatient setting, which is very resource-intensive. Thus, some hospitals won’t offer it,” says Dr. Topal. “But sotrovimab, which is a single injection, is readily available.”

12. Do I still need to be ‘up to date’ on vaccination if Paxlovid is available?

Vaccination remains a key part of prevention, even as more drugs become available, says Dr. Topal. He pictures prevention as an upside-down pyramid. Vaccination, mitigation efforts, such as masking, and testing would be at the base—and medications at the top point.

“Early testing is key to making these drugs work,” he says. “It’s always been the Achilles’ heel of these antiviral drugs that most people don’t get tested—or they don’t have access to testing.”

He encourages taking a test even if you think you only have a cold or allergies—and if you can get one. “Home testing is a huge part of the way to really ‘operationalize’ these medications,” he says, adding that while home tests may not be as highly sensitive as the laboratory-based polymerase chain reaction (PCR) tests, they are still very helpful in making a diagnosis.