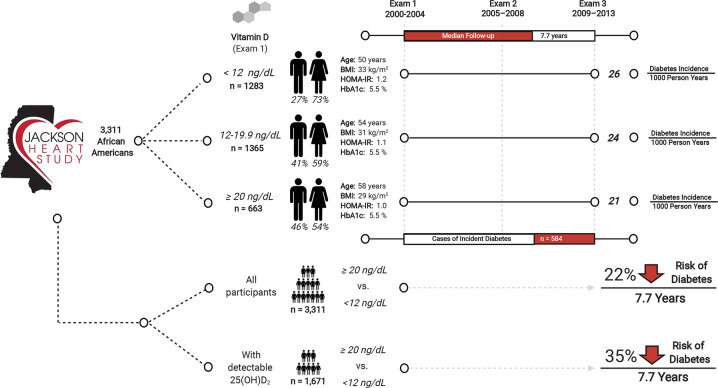 Two new studies led by researchers at The Ohio State University Wexner Medical Center and College of Medicine have shown that serum vitamin D levels in African Americans are associated with diabetes risk.

The studies suggest that lower levels of vitamin D are associated with insulin resistance and a higher risk of developing diabetes. Earlier studies by others have shown a similar link between low vitamin D and diabetes for non-Hispanic White and Hispanic Americans, but it was unclear whether the same is true for African Americans.

Vitamin D is a fat-soluble vitamin that is important for maintaining blood sugar balance, and bone and general health. Most of the body’s vitamin D is produced naturally in the skin during exposure to ultraviolet rays in sunlight.

The new studies examined data from the Jackson Heart Study (JHS) and the Multi-Ethnic Study of Atherosclerosis (MESA). Analysis of the MESA data further suggested that higher levels of body-fat alter the relationship between vitamin D and diabetes risk.

The new studies both used serum levels of 25-hydroxyvitamin D (25[OH]D), the biological precursor of active vitamin D. That serum molecule is a common clinical measure for assessing whether an individual has sufficient levels of vitamin D for good health.

The findings based on JHS date are published in the journal Nutrition & Diabetes; findings using the MESA date are reported in BMJ Open Diabetes and Research & Care.

“Our studies suggest that higher levels of vitamin D in African Americans may protect against the development of diabetes,” said lead researcher Dr. Joshua J. Joseph, an endocrinologist and an assistant professor in the Division of Endocrinology, Diabetes and Metabolism at Ohio State.

“It’s been known for some time that low levels of vitamin D in the blood—measured as 25(OH)D—are associated with an increased risk of diabetes in White populations, but our research strongly suggests that this relationship also holds true for African Americans,” said co-author Amaris Williams, a postdoctoral scholar in the Division of Endocrinology, Diabetes and Metabolism at Ohio State

For these studies, Joseph, Williams and their colleagues examined serum vitamin D levels collected from 3,311 African American participants in the Jackson Heart Study during the period 2000-2004.

Of these, 584 developed diabetes during a median 7.7 years.

The researchers examined 5,611 participants in the MESA study who were without diabetes at baseline. The group included non-Hispanic White, Black, Hispanic and Chinese Americans. The association of 25(OH)D and diabetes was followed over 9 years.

“Our MESA-study findings suggest that the inverse association between 25(OH)D and the risk of developing diabetes is similar across races and ethnicities,” Williams said.

Among the questions that remain to be answered, Joseph said, “More research is needed to learn whether vitamin D supplementation among individuals with vitamin D deficiency can improve risk for diabetes.”