Traffic-related air pollution is causing FOUR MILLION new cases of asthma each year (so how many is toxic air to blame for in your country?)

Four million children around the world develop asthma each year because of road traffic pollution, a major study has estimated.

Exposure to nitrogen dioxide, largely from road transport, is thought to be behind 38,000 new cases in the UK and 240,000 in the US each year.

The global research ranked the UK the 29th worst out of 194 countries for the rate of children developing asthma from traffic pollution.

The US placed 22nd while Australia came 64th, according to the study published in a prestigious medical journal.

Charities have warned the findings provide further evidence that toxic fumes are putting tens of thousands of children at risk of potentially deadly asthma attacks. 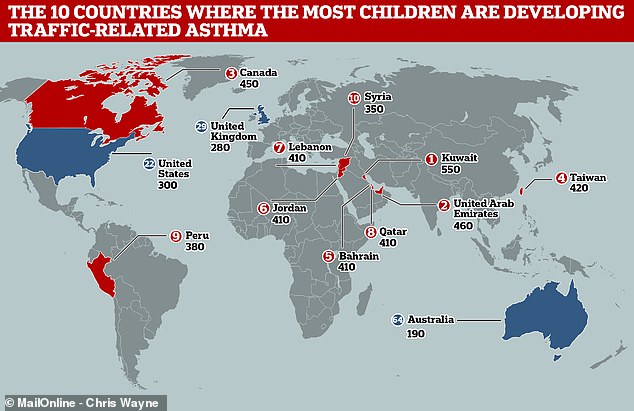 The global research ranked the UK the 29th worst out of 194 countries for the rate of children developing asthma from traffic pollution. The US placed 22nd while Australia came 64th, according to the study published in a prestigious medical journal

Researchers found 19 per cent of asthma cases in youngsters – aged one to 18 – in the UK and US can be attributed to nitrogen dioxide pollution.

This rose to almost a third in London (29 per cent) where pollution levels are highest, according to the study published in The Lancet Planetary Health.

In comparison, the figure was 300 in the US and 190 in Australia, the team at the George Washington University found.

Another ranking of the percentage of diagnoses linked to nitrogen dioxide exposure found South Korea came top, with nearly one third (31 per cent).

Asthma is a common but incurable condition which affects the small tubes inside the lungs.

It can cause them to become inflamed, or swollen, which restricts the airways and makes it harder to breathe.

The condition affects people of all ages and often starts in childhood. Symptoms may improve or even go away as children grow older, but can return in adulthood.

Symptoms include wheezing, breathlessness, a tight chest and coughing, and these may get worse during an asthma attack.

Treatment usually involves medication which is inhaled to calm down the lungs.

Triggers for the condition include allergies, dust, air pollution, exercise and infections such as cold or flu.

If you think you or your child has asthma you should visit a doctor, because it can develop into more serious complications like fatigue or lung infections.

While India ranked low for nitrogen oxide, levels of other pollutants such as particulate matter, ozone, carbon monoxide, would be higher, the authors suggest.

Dr Samantha Walker, of Asthma UK, said: ‘Polluted air is a major threat to public health, affecting an estimated half a million children with asthma in the UK

‘Worryingly, this study confirms existing research which shows children breathing in toxic air from traffic fumes have stunted lung growth and are at risk of developing asthma.’

Cases of childhood asthma have increased steadily since the 1950s, making it the most common disease among children worldwide.

Experts are divided as to what actually causes people to become asthmatic, but exposure to air pollution in childhood increases the risk by damaging the lungs.

While various pollutants in traffic air pollution could be responsible, previous research suggests exposure to nitrogen dioxide could be key.

Researchers used global data on nitrogen dioxide concentration and asthma incidence to estimate the number of new cases which could be related to traffic pollution. 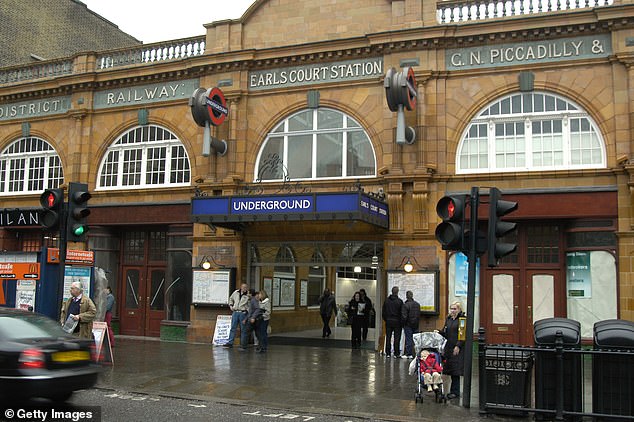 The road outside Earl’s Court Underground Station in Kensington, London, is the most polluted in the country, according to Friends of the Earth’s research

The UK’s air pollution was labelled a ‘national embarrassment’ in September.

Figures for 2017 showed 37 out of 43 air quality zones across the UK had illegal levels of nitrogen dioxide pollution, the same number as the previous year.

Annual average levels of the pollutant from exhaust fumes fell in most places, figures from the Government and environmental law charity ClientEarth revealed.

But levels are still more than double the legal limit in Greater London and also well over the limit in areas including South Wales, West Midlands, Glasgow and Greater Manchester.

Brighton, Worthing and Littlehampton in West Sussex – an area declared as legal in the previous year – crept up to just below the threshold again, the statistics show.

The UK has been breaching EU pollution limits for nitrogen dioxide, much of which comes from diesel vehicles, since the rules came into effect in 2010.

Air pollution causes an estimated 40,000 premature deaths a year in the UK and is linked to health problems from childhood illnesses to heart disease and even dementia.

NHS data shows there were more than 77,000 hospital admissions for asthma last year, with an estimated 1,500 deaths.

The latest findings will be of particular concern as UK has one of the worst mortality rates in Europe, despite two-thirds being considered preventable.

Three-quarters of cases were found to be in cities, yet levels of pollutants often remained below guidelines from the World Health Organisation (WHO).

Despite regarding air pollution as ‘a major environmental risk to health’, more than nine in ten cases of asthma occurred in areas where traffic pollution levels were below the limit of 21 parts per billion.

She said: ‘Our findings suggest that the WHO guideline for annual average NO2 concentrations might need to be revisited, and that traffic emissions should be a target to mitigate exposure.’

The findings come the same week as London introduced an Ultra-Low Emission Zone in a bid to clean up the capital’s toxic air.

Many owners bought diesels because of tax breaks given out when they were seen as a better choice for the environment.

But now drivers of diesel cars over four years old – and most petrol cars over 13 years old – are being charged £12.50 a day to enter or move around in central London – on top of the £11.50 congestion charge.

Charities insist air pollution is blighting the lives of children across the UK, not just in London, and called on the Government to do more to cut levels.

Dr Penny Woods, chief executive of the British Lung Foundation, said: ‘We used to think the only real danger roads posed to children was the threat of a car accident.

‘However now we can see there’s an equally deadly risk; breathing in illegal levels of air pollution and getting a respiratory disease like asthma, or growing up to have smaller, weaker lungs.

‘Air pollution is invisible, so it’s easy to ignore – but studies like this make it clear toxic air is a pressing threat, and we need to act.’

THE WORST 10 AREAS FOR AIR POLLUTION IN THE UK

UK locations ranked by annual average level of NO2 (in ug/m3) – the objective is 40ug/m3: