With more than 20 million acres of corn and soybeans, Illinois is among the top U.S. producers of those crops. To make it all happen, the state relies on thousands of farmworkers — some of whom travel to the state for seasonal work and others, like 35-year-old Saraí, who call Illinois home.

Being an agricultural worker “is the most beautiful thing,” Saraí said in an interview in Spanish.

She moved to the U.S. from Mexico to find work that would allow her to better support her family. KHN agreed to identify Saraí by only her first name because she’s undocumented. Since the onset of the pandemic, she’s spent most of her time shepherding her three kids through their virtual school classes.

There have been tens of thousands of covid-19 cases and hundreds of deaths reported among U.S. farmworkers and meat plant workers. Because no official tracking system is in place, these numbers — based largely on media reports — are likely an undercount.

And yet, agricultural workers like Saraí struggle to access the most basic tool to fight the spread of the coronavirus: testing. Saraí, for example, has been tested only once since the start of the pandemic. The nearest testing site is the next town over, and without a car or a public transportation option, she had to borrow a friend’s vehicle to get there. She hasn’t gotten covid, but Saraí knows many others who’ve gotten sick. She said the pandemic has made the past year a sad and difficult one.

“Many farmworkers are both working and living in sometimes isolated rural regions of the country,” said Diana Tellefson Torres, executive director of the California-based United Farm Workers Foundation.

Besides living far from testing sites, these workers often lack reliable information in their native language and have a general mistrust of the health care system. And missing work to get a test, or to isolate or quarantine, could be financially devastating.

While the rollout of the coronavirus vaccines provides some hope for a better future, the virus is still spreading across the U.S., and efforts to expand access to testing and build trust with farmworkers are still needed, Tellefson Torres said.

She said these efforts will also be critical for ensuring that these hard-to-reach, vulnerable populations are vaccinated when the time comes.

Early on in the pandemic, Gilberto Rosas, an anthropologist at the University of Illinois at Urbana-Champaign, was struck by how easy it was for him — a work-from-home professor — to get a test, compared with workers in nearby towns who were more vulnerable to catching the virus and developing a severe case of covid.

The university has its own mass testing program for students and employees. The Urbana-Champaign campus is just 15 miles south of Rantoul, where virus outbreaks at a meat processing plant and a hotel housing migrant farmworkers were among the worst in Champaign County last year.

“We can walk down two flights of stairs, go out the back door and we can get testing,” Rosas said. “Whereas these people who are at the forefront — who work in the fields, who work in the plants — they lack that kind of access.”

Rosas is part of a team at the University of Illinois that had set out to study what was causing the virus to spread in the agricultural community. They also decided to do something to address testing access.

“We want to both unearth inequalities, but also mitigate them,” Rosas said.

The researchers teamed up with medical professionals from clinics in the area to organize pop-up coronavirus testing events in Rantoul.

The events are advertised in English and Spanish. The group has tried to leverage long-standing community connections to bolster turnout, reaching out to churches and organizations that cater to the area’s immigrant and agricultural workforce.

Even with that outreach, they’ve been frustrated by low attendance. At an event held before Christmas outside a community center, for example, only 15 people came for a test. Four of those 15 tested positive — a very high rate.

Sofia Bolanos Robinette suspects the reason more people don’t turn out for coronavirus testing, even at convenient times and locations, is that a positive result can be financially devastating.

Bolanos Robinette has worked with farmworkers for the past 10 years, most recently as an advocate for students in the Illinois Migrant Education Program. She recently joined Rosas and the other University of Illinois anthropologists to study issues like barriers to testing.

She recalls helping last summer with a coronavirus testing effort aimed at farmworkers who travel to the region for seasonal work. The clinic tried to make it as easy as possible for the workers to attend by setting up a station during off-hours right outside the migrant housing area.

“But some of them said they didn’t even want to take the test, because, in the case they get back [a positive result], they will have to stop working,” Bolanos Robinette said. “And then that means, for them, they will not get any money for at least two weeks.” 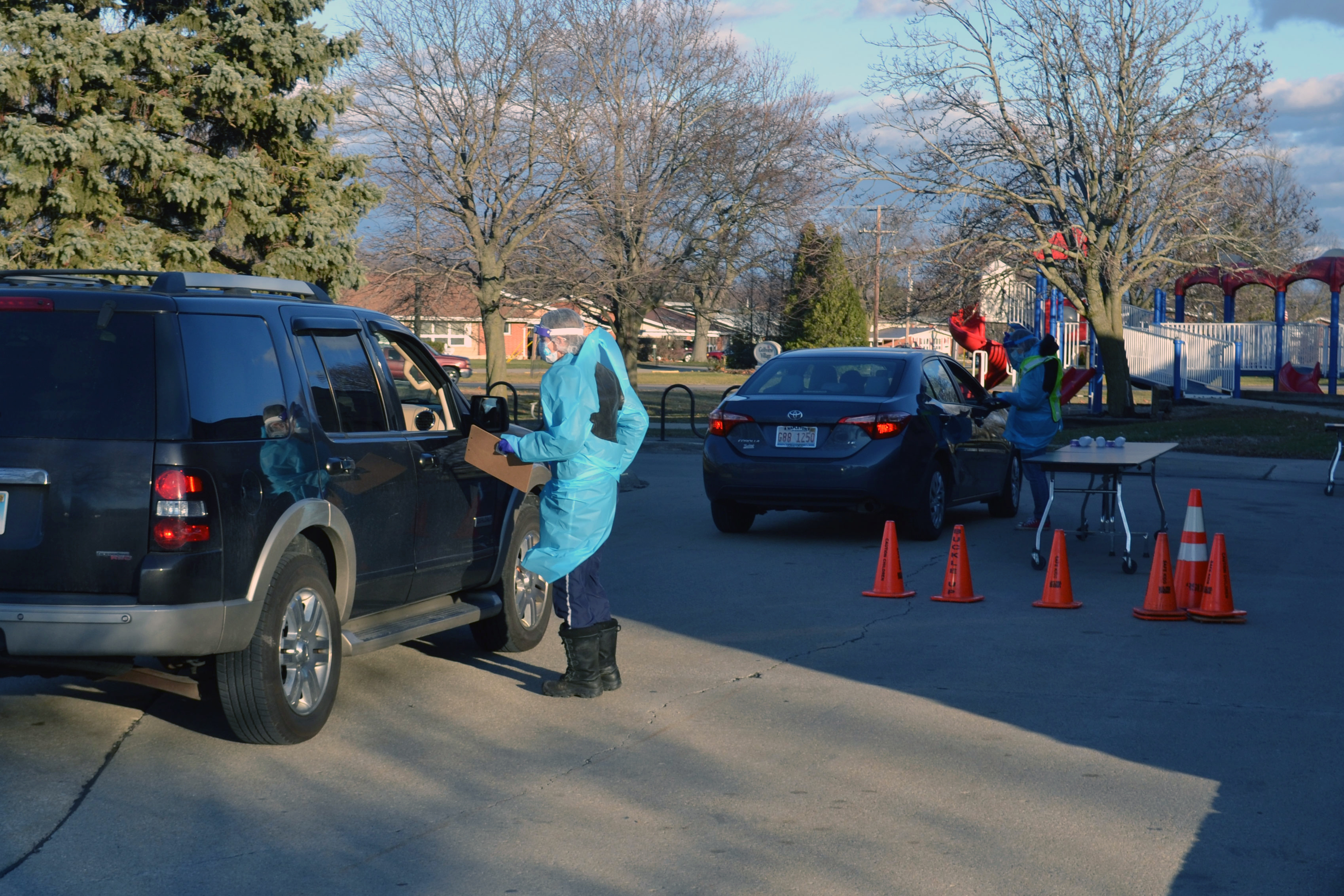 That’s a big deal, she said, especially for farmworkers, who earn the bulk of their yearly income doing this seasonal work.

For low-wage farmworkers, “every penny counts,” said Tellefson Torres of the UFW Foundation. In the most recent National Agricultural Workers Survey, one-third of farmworkers reported family incomes below the poverty line.

And they don’t have the same safety net that documented workers in the U.S. have.

“When you have to worry about putting food on your own table for your family, sometimes that is the focus, because there isn’t another option,” Tellefson Torres said.

For undocumented workers, she said, there are even more disincentives to get tested. They may worry it could jeopardize their efforts to obtain a visa — a common misperception. And after years of the Trump administration being more aggressive with immigration enforcement, Tellefson Torres said, there’s a huge lack of trust and a real fear of deportation.

Despite lower-than-ideal turnout at the pop-up events, University of Illinois anthropologist Ellen Moodie said attempts to host “a few small-scale testing events, irregularly scheduled and located in different sites” have made a difference for handfuls of people who might not otherwise have known they had the virus.

However, Moodie said, the U.S. needs a comprehensive strategy to address the virus and protect vulnerable workers. Many public health experts have been calling for such a strategy since the start of the pandemic.

So far, President Joe Biden has made that a priority of his administration. In a document published in January, Biden outlined a covid strategy focused on boosting the production and distribution of vaccines. His plan includes efforts to address supply shortfalls for testing materials, implement stronger worker safety guidelines, expand emergency paid leave and otherwise strengthen the social service safety net.

Building trust with farmworkers remains critical, Tellefson Torres said, not just to get more to show up for testing — but also to get them to show up for vaccination as soon as they are eligible.

At a recent virtual town hall hosted by the UFW Foundation, Tellefson Torres said she has heard from many farmworkers across the U.S. who are eager to get a vaccine. But others have reservations.

The biggest concern she’s heard has been about the potential cost, especially for the many workers who lack health insurance. Tellefson Torres said her organization is working to get the word out that covid vaccination is free for everyone.

Others, she said, worry about vaccine safety, asking questions like: “What is this vaccine? What does it contain? … What are you putting in my body?”

Vaccine safety is something Saraí — the farmworker in Illinois — worries about too. After finding some information online, she grew concerned about the possibility of adverse reactions, so, at least for now, she isn’t planning to be vaccinated.

However, Saraí said, if someone she trusts shows her evidence the vaccines are safe, she could change her mind.

Tellefson Torres said partnerships like that will be critical to ensure that agricultural workers, who have faced so many challenges throughout the pandemic, have equitable access to the vaccines — their best hope of staying healthy.

“The norms that we have seen prior to the pandemic — of not prioritizing worker health or just basic safety-net needs — need to be addressed both by state, local, federal governments and employers,” she said. “We’re literally talking about a life-and-death situation here.”