EAST ST. LOUIS, Ill. — As a child, Mykael Ash enjoyed picking up seashells near the Mississippi Gulf Coast. His grandfather lives there, so trips to the beach were a regular part of life.

“It’s peaceful energy,” Ash said. “Especially when you put that seashell to your ear.”

At age 32, he still collects shells. But the terrain is different in this city of 18,000 people. Ash walks on concrete instead of sand, picking up shells left by bullets as he walks through the city for exercise.

“It just hit me one day,” he said: He could use the shell casings in his artwork.

Gun violence has been a persistent problem in East St. Louis, which to the frustration of many residents had one of the highest murder rates of any U.S. city before the pandemic. While the rates have improved somewhat, it’s still a plague there and a growing problem in communities across the country. More than 47,000 people died from gunshot injuries nationwide in 2021, according to data from the Centers for Disease Control and Prevention, which was the highest toll in the U.S. since the early 1990s.

In Ash’s studio, spent ammunition mixes with caution tape, shredded tires, broken glass, and paint to transform the litter of violence into art that tells stories about race, resistance, and history. The work is personal, Ash said.

Each year since he was 17, Ash has lost at least one friend or relative to gun violence. That includes his cousin Dashaun “Bookie” Gage, 28, who died in 2018 in a shooting in front of a gas station across the Mississippi River in St. Louis. Ash and Gage were close. Losing Gage left Ash so traumatized that he stopped going to that gas station. He turned to his art after the shooting, creating a portrait of Gage the same year.

“My art saved my life,” Ash said. “There’s so much other stuff that I could have gotten off into.”

Ash fell in love with art at a young age. His mother, Gina Walker, noticed his interest in drawing when he was just 2 and their family moved from Anchorage, Alaska, to East St. Louis. It took them eight days to make the journey, Walker said. Little Mykael drew while his parents drove.

“He was drawing before he could even talk very well,” Walker said. “As a little boy, I told him that he would be a world-renowned artist.”

They moved again when he was 11. The school district in East St. Louis had cut funding for art, Walker said, so she moved their family to neighboring Belleville, Illinois, where Ash could learn in schools that at the time had more robust art programs.

“He would go to a craft store and he would touch the paper,” Walker said. “The paper had to have a certain touch and a certain feel.”

His skill and his love for art grew. Ash sold his first painting as a high school student. His art teacher, Dan Krause, purchased the painting for $60. Ash went on to study at the Art Institute of St. Louis before the college closed in 2019.

Today, Ash is a resident artist at the House of Miles East St. Louis, a nonprofit housed inside Miles Davis’ childhood home in the city. The jazz legend is a source of inspiration for Ash, who has painted at least 250 portraits of the musician. “Every picture has a distinct expressive feel to it,” said Lauren Parks, the president and a co-founder of the House of Miles.

As a birthday gift to his mother in 2019, Ash put together a special show of his art at the House of Miles about the strength of the Black community. Each painting illustrated pride, Walker said.

His work also delves into the darker side of the city’s history. 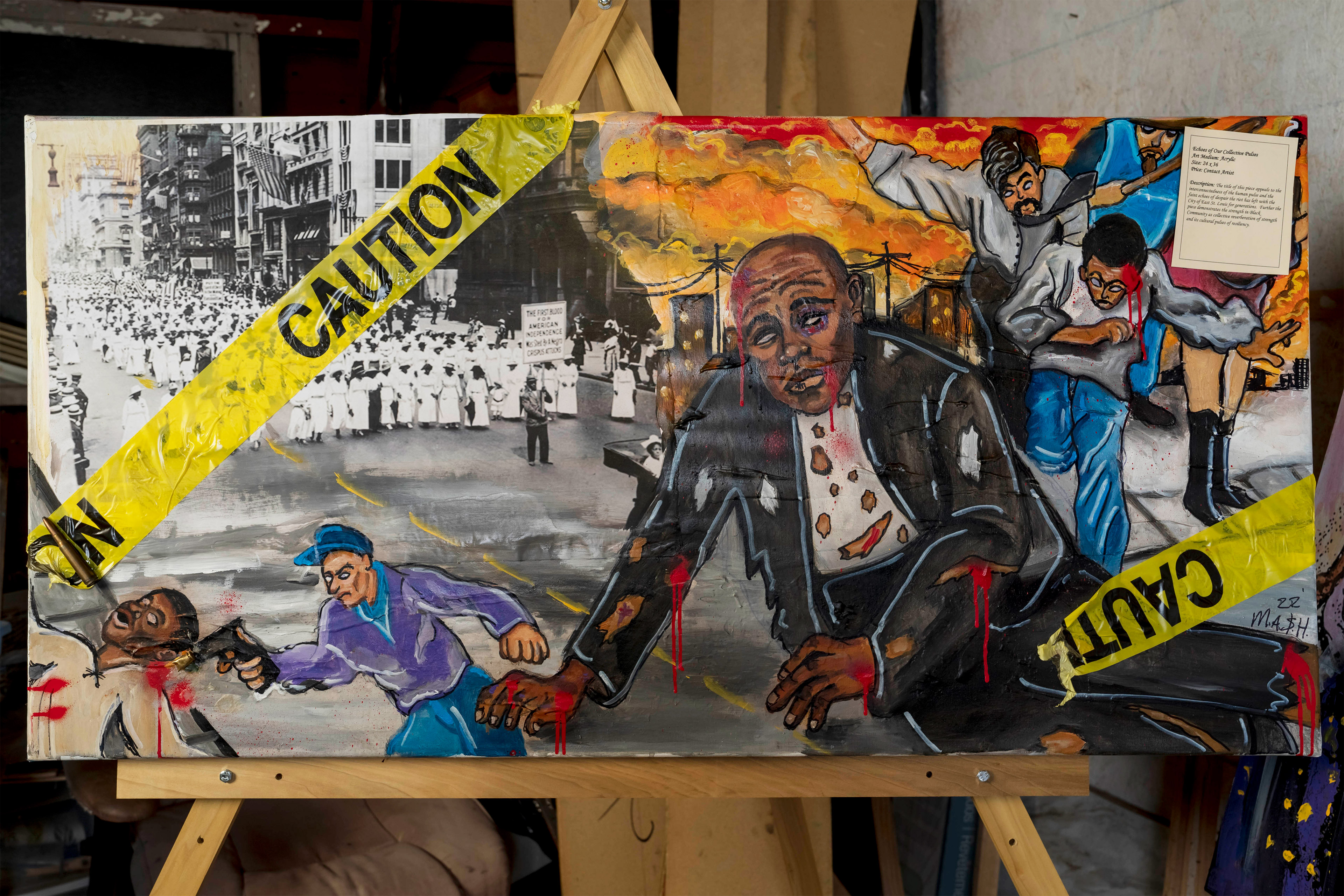 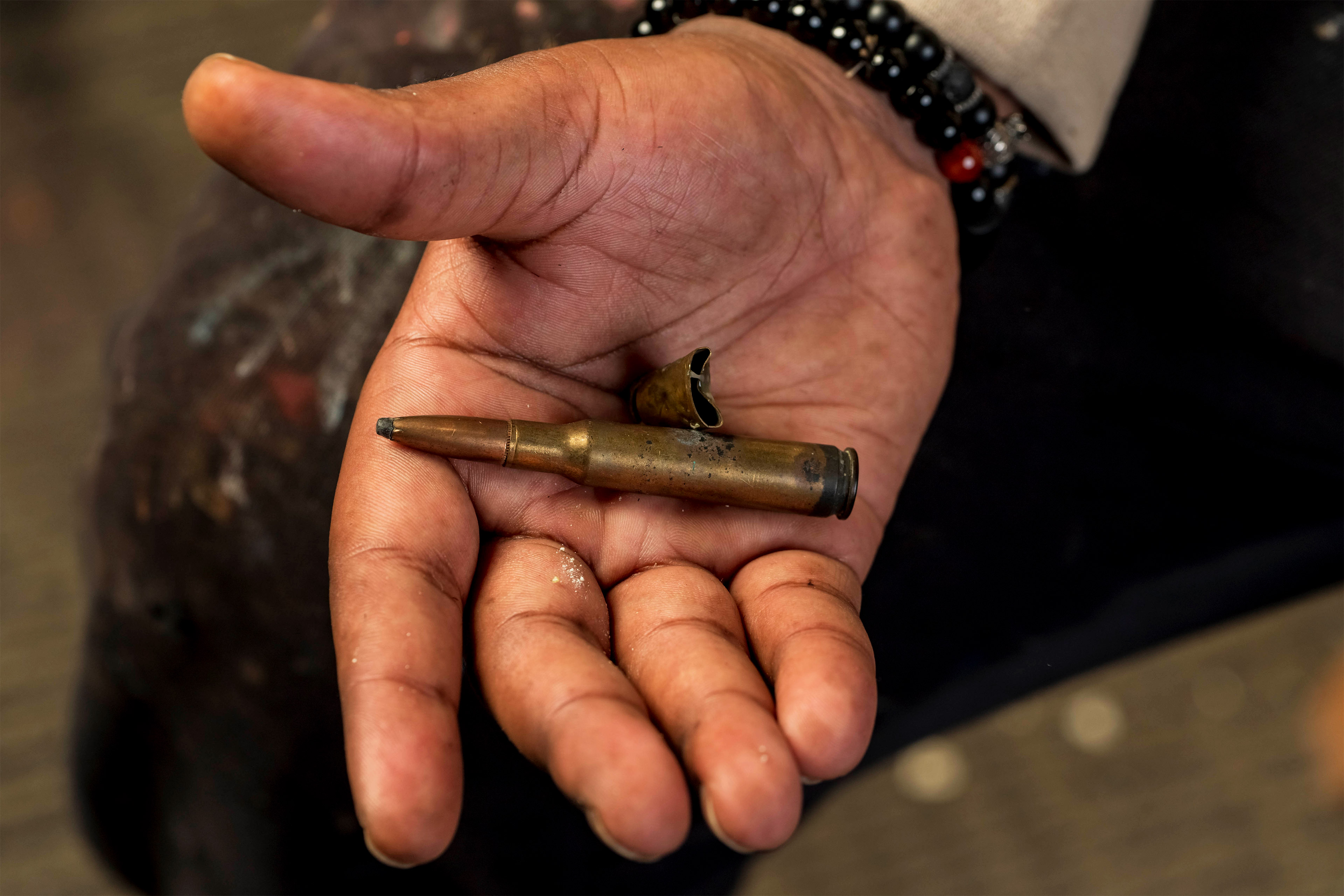 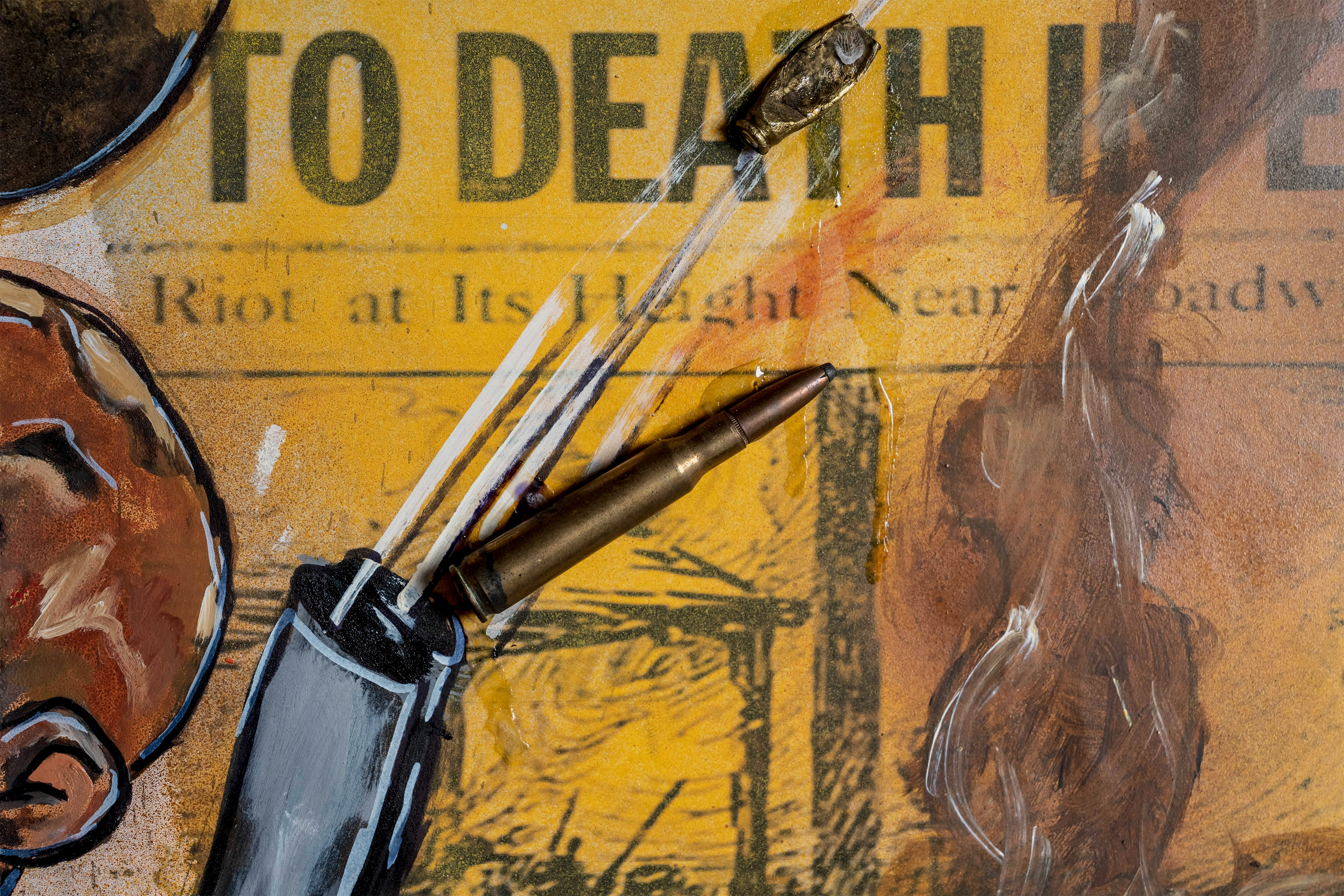 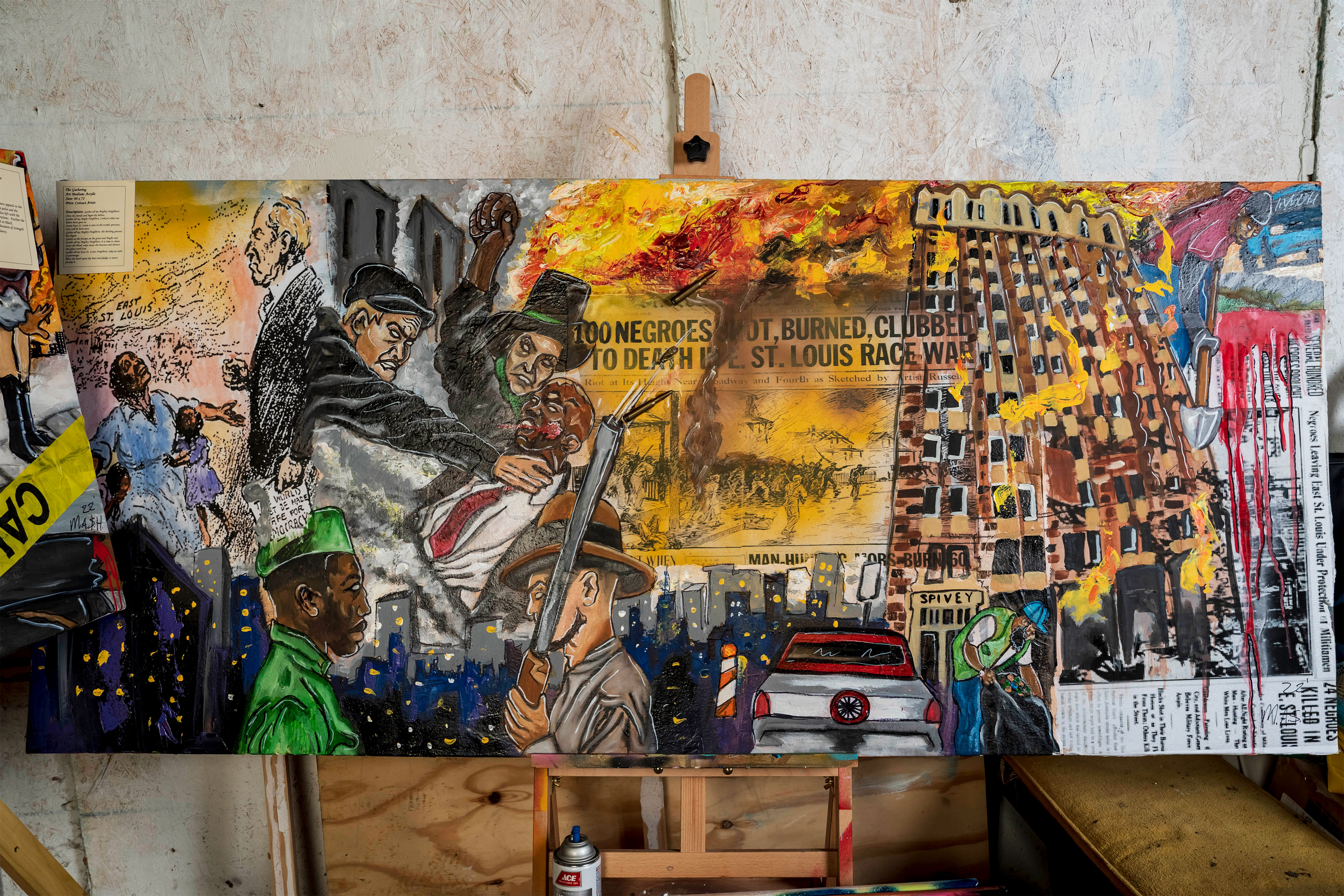 Earlier this year, Ash finished a portrait series about the East St. Louis race riot of 1917, using the shell casings from today’s violence. The riot left as many as 200 Black residents dead after white mobs terrorized the city for three days.

“It’s a cycle we’re kind of stuck in,” Ash said. “We’re left with the oppression of it.”

Ash paints the pain of the present, too. He painted a mural to honor the life of Cedric Gooden, a local rapper known as Cold Kase who was gunned down in 2019. The mural he painted bears the slogan “STOP THE VIOLENCE” — a desperate cry that resonates across decades.

The mural also says “CITY OF CHAMPIONS,” the motto of the city that produced not just Miles Davis but also Olympic gold medaling track-and-field stars Dawn Harper Nelson, Jackie Joyner-Kersee, and Al Joyner. Ash hopes the slogan shows that even amid limited resources, those who grow up in this city find ways to win.

Ash teamed up with fellow artists Kas King and Edna Patterson-Petty to paint a mural on the side of a historical theater. Their artwork helped save the building from demolition. 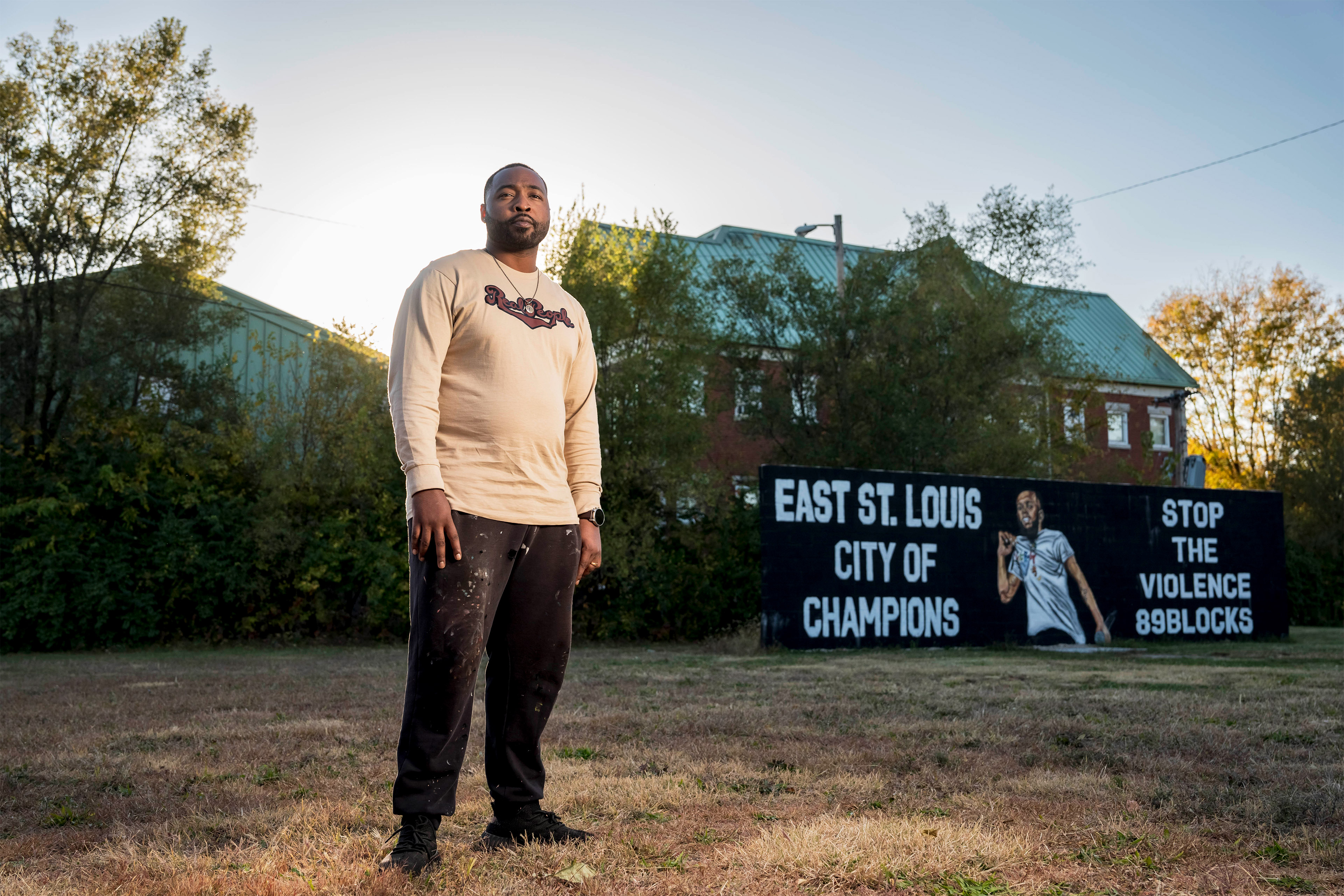 As he gathers shell casings in parts of the city with vacant buildings and abandoned homes — and even on the walk to the grocery store near his grandmother’s home — Ash dreams of a vibrant city splashed with color. He wants to turn his Third Ventricle Studios into an art gallery, with a co-op space, so other artists can showcase their work. In the meantime, he’s bringing corners of the city back to life and transforming its bullets into beauty.

“I see a blank canvas,” Ash said. “I see a place with a lot of potential.”