Although breastfeeding is associated with certain health benefits for your baby, there is nothing wrong with opting to bottle feed instead. Breastfeeding can be emotionally and physically taxing. Not to mention, many new mothers run up against serious obstacles when breastfeeding for the first time, such as latching problems, low milk supply, and breast infections.

Contrary to popular belief, breast isn’t necessarily best; whatever method allows you to meet your baby’s nutritional needs is.

Unfortunately, “breast is best” sentiments and shame surrounding formula feeding are still pervasive in parenting circles. Take it from this pregnant Redditor, who has run up against some serious boundary violations from her husband and mother-in-law after deciding not to breastfeed her child.

Writing from a throwaway account, the mom-to-be explained the context of her situation: Her pregnancy was unplanned, and she has spent the bulk of it grappling with her existing trauma around her breasts being touched. “I’ve been to therapy,” she explained, “and the solution is, ‘then don’t let anybody touch them.’“

Sounds pretty straightforward, right? Her husband disagrees — and OP believes his obsession “with the idea that babies must be breastfed” harkens from her MIL.

“[My husband] wants to prep me by getting me comfortable with it [by doing breastfeeding exercises],” she continued. “I’ve told him the nightmare it will be if he [touches my breasts] and how it will make me feel like he’s a danger to me. So his solution has been the idea of my MIL doing it.” 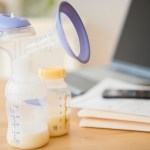 This New Law Is a Game-Changer for Pregnant & Breastfeeding Employees

OP immediately expressed her opposition to the awkward suggestion, but her husband has continued to pressure her: “It’s wrong on so many levels to me, but he’s freaking out, telling me I’m ‘never going to live a normal life.’ … I could be biased on this because I’m clouded by trauma, which is why I’m asking here. I know I can act crazy sometimes because of it, but this seems totally unreasonable to me.”

It should go without saying, but everyone has the right to set boundaries regarding their physical body — including mothers, and especially people who have a history of trauma. If OP isn’t comfortable breastfeeding, then her family should respect her boundary and stop trying to coerce her into violating it.

Redditors in the comments resoundingly sided with OP. Many folks validated how bizarre and awkward it would be for anyone to have their MIL touch their breasts, especially in this emotionally charged context.

“NTA,” wrote one user. “It’s totally OK to bottle feed. Don’t let anyone tell you differently. … Your partner doesn’t get to dictate how you use your body.”

“You’re NTA for wanting a right to your own body,” another commenter chimed in. “And mother-in-law wanting to do the exercises for you clearly crosses a line, and you’re NTA for enforcing that boundary. Personally, I’d be weirded out by it too.“

Others offered practical advice for OP since babies are known to reach for their mothers’s breasts. Some also advised that she resume therapy with a trauma-informed practitioner.

“A lot of standard care involves mom’s breast area, so you’ll need to be prepared for what [your healthcare providers] suggest and be very explicit about declining it,” one wise commenter suggested. “Prepare yourself for the strong possibility that when holding your baby it will instinctively reach out to touch your breasts. I’m not a mother, but I’ve held babies and been around babies enough to know that they will do this both to all women and even men too!”

Check out these calming mental health apps we swear by: