Last June, Melissa Hanning was standing in a department store dressing room trying on clothes. Surrounded by mirrors, she noticed a black mole on her shoulder.

“Oh”, thought the Queensland mum-of-two, “I wonder how long that [has been] there for.” 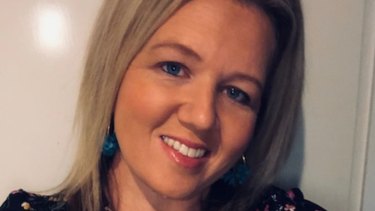 She wasn’t worried, but she was keen to get it checked.

Hanning, 36, was familiar with skin cancer. Ten years ago, she was diagnosed with a basal cell carcinomas (BCC), a comparatively benign form which accounts for about 70 per cent of non-melanoma skin cancers, on her face.

In the decade since, she had annual skin checks and had “probably over a dozen more” removed from her face and arms.

The mole she saw in the mirrors looked different to the BCCs, which were all pink or brown.

Her dermatologist was booked up for six months, so she booked into a local bulk billing skin cancer clinic and asked for a biopsy.

“That was on a Tuesday and on the Monday, the receptionist called to say, 'You have to come in for the results’,” Hanning recalls. “I knew straight away it was serious.”

When she entered the doctor’s office that day, he immediately put a box of tissues in front of her and apologised. “It’s a melanoma,” he said.

Hanning began to cry, aware it wasn’t good but not entirely clear about what it meant either.

In the last five decades there has been a 90 per cent increase in melanoma.

What it meant was she had fallen prey to the nation’s leading cancer affecting young women (20-24 years) and men (35-50 years).

In the last five decades there has been a 90 per cent increase in melanoma. It is estimated that, this year, about 15,000 new cases of melanoma will be detected and 1,725 Australians will die.

“Get your skin checked,” they urge. “This is the same message that we advocate for as dermatologists. Unlike breast, bowel and cervical cancers, there is currently no population-based screening program for melanoma.” 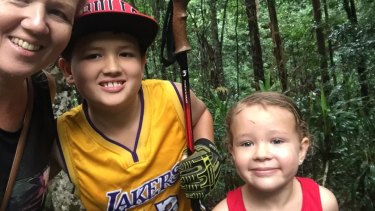 Melissa Hanning with her two children.

Despite the Slip! Slop Slap! campaign, first aired in 1981, being “one of the most successful health campaigns in Australia's history”, the rates continue to rise.

Francis, also the president of the Australasian College of Dermatologists, puts this down to a combination of factors including a delay in the health impact from the campaign, people becoming complacent and greater awareness leading to earlier detection as well as greater likelihood of detection.

Things that would be called a “funny mole” in the past might now be diagnosed as an early stage melanoma. “There’s much more stringent criteria,” Francis adds.

The “funny mole” on Hanning was, she believes the result of “all the damage I did when I was younger” and purposefully getting sunburnt to get a tan.

That Monday afternoon in June, the doctor removed a 6 cm long by 3cm wide by 3cm deep chunk from her shoulder.

She now seeks out shade, carries an umbrella with her to her children's sporting matches and covers up with a hat, sunglasses and longer-sleeved clothes. But, the experience has left Hanning rattled.

“You just don’t know what’s happening underneath the skin … it can be really scary,” she says.

Luckily she caught it early, but she now has full skin checks every three months, which she will continue to do for the next year as the chance of recurrence is much higher for those with a previous diagnosis.

Pioneering 3D, whole body imaging machines linked with a telemedicine network, have been set up at the University of Queensland and there are plans to role them out in NSW and Victoria. They review skin lesion images, and when enough images are accrued for the machine to use AI and recognise “good” moles and “bad” moles will make detection faster and easier independent of time, access and location.

In the meantime, Francis urges people to cover up in the sun. “Clothes are the best protection and use sunscreen on the bits you can’t cover up,” he advises, adding: “Look out for moles that have changed, grown or are bleeding. Get someone to check them, preferably your dermatologist. It could be important.”