A teacher whose eye twitch turned out to be shingles has been left with permanent nerve damage after doctors missed the signs.

Tanya Rust, 29, from Montreal, Canada, was rushed to hospital after an eye twitch deteriorated into facial paralysis within hours in May 2017.

She spent eight days at home in ‘excruciating pain’ as her condition worsened.

A late diagnosis meant Miss Rust’s brain ‘remained in a confused state’, and she now suffers with tremors due to confused signals in her nervous system.

She has to wear noise-cancelling headphones due to her hypersensitive hearing and tinnitus. 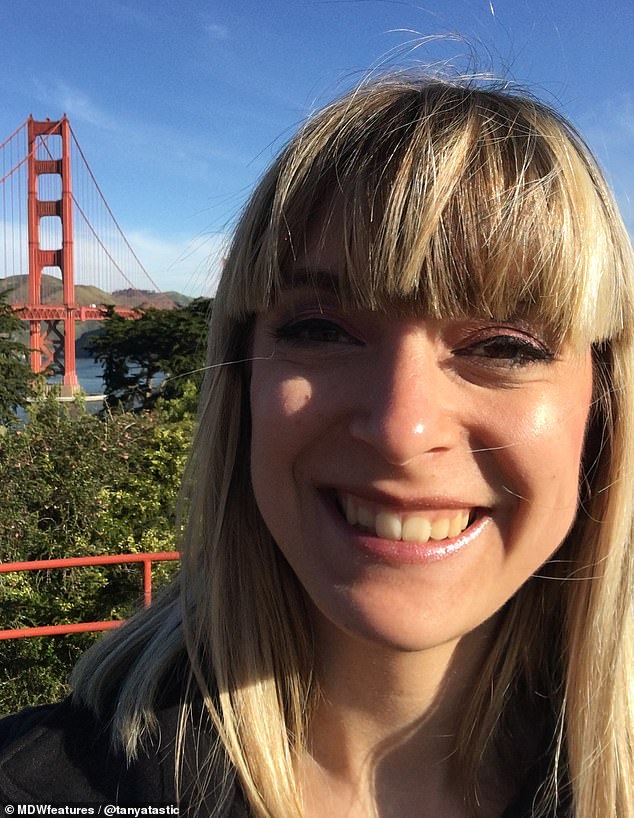 Tanya Rust, 29, pictured before her shingles, believes her symptoms started when she was under overwhelming stress while teaching a university course in May 2017 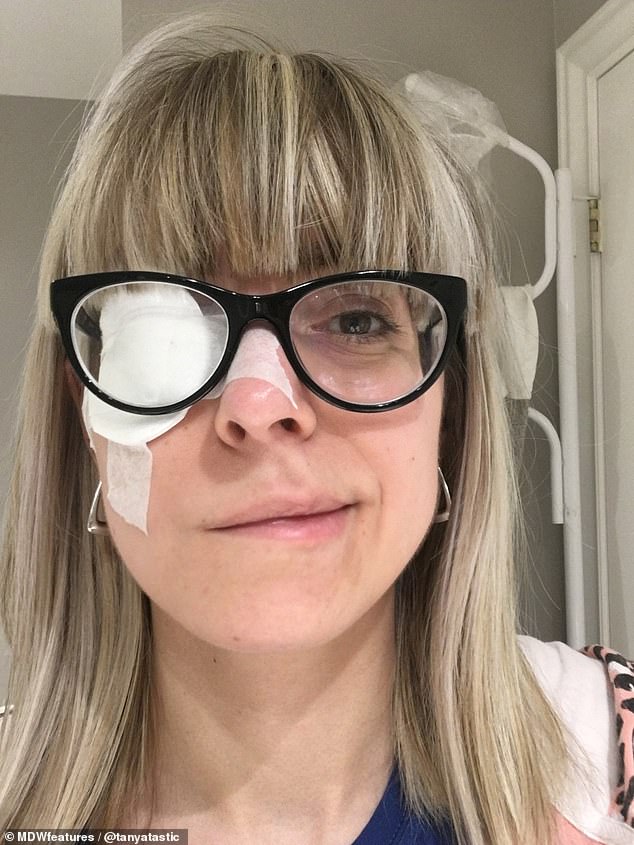 Miss Rust first felt twitching in her right eye one morning. This developed into a pain between her ear and jaw on the right side of her face. Pictured, with her eye taped shut 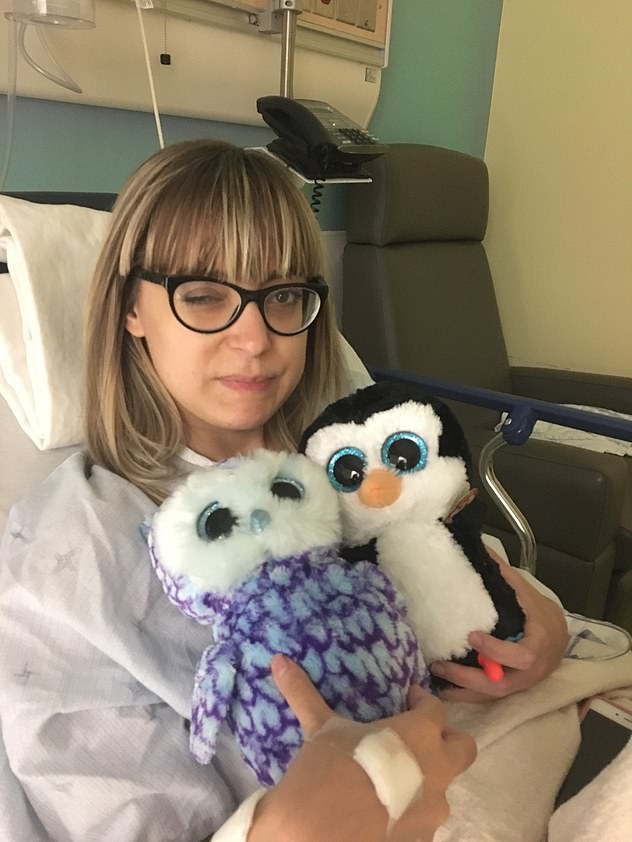 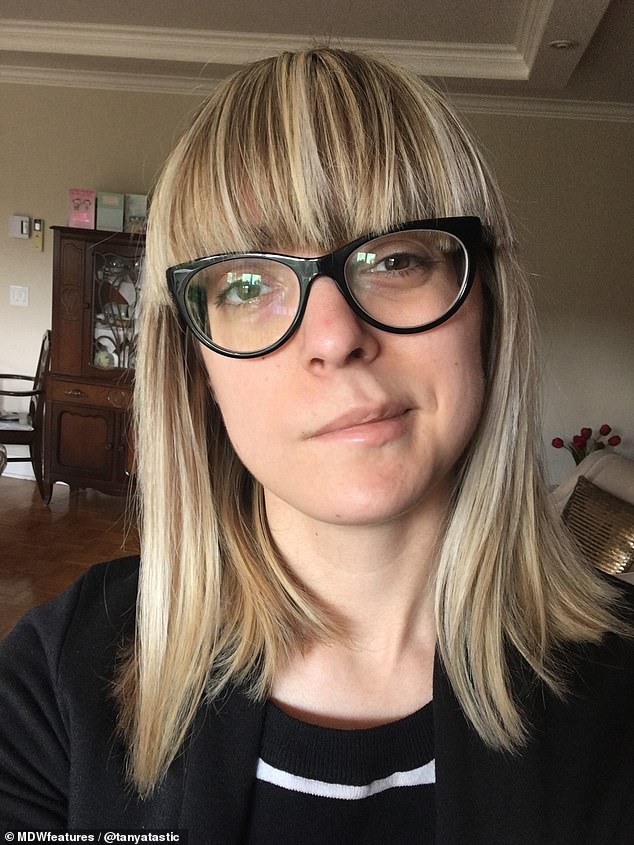 Miss Rust pictured in May 2017 after being told by a specialist that he had never seen a facial paralysis like hers. She was originally diagnosed with Bell’s Palsy

Miss Rust believes her symptoms started when she was under overwhelming stress while teaching a university course in May 2017.

She said: ‘Leading up to May 13, 2017, I had been stressed because I was teaching, speaking at conferences, organising a conference and involved in several committees.’

While attending a graduation ceremony, Miss Rust noticed a twitching in her right eye before experiencing a pain between her ear and jaw on the right side of her face.

Later that day, the twitching spread to the entire right side of her face.

Although she knew her symptoms were strange and unusual, Miss Rust tried to remain calm.

However, within hours, she was no longer able to blink, and she was taken to hospital after not being able to close her right eye and being numb all down her right side.

Miss Rust said: ‘I woke up that day with pain in my ear and jaw area and had a graduation ceremony to go to.

‘While at the ceremony, the right side of my face began twitching and the pain got worse throughout the day as the twitching became more frequent.

‘It was an odd sensation and uncomfortable as I had never really experienced twitching in my face before. I found the pain and the twitching to be odd as it was different and weird.

‘By that night, I couldn’t blink my right eye. I felt extreme panic because it was completely out of my control. My body had never acted this way, so to have these symptoms was very frightening.’

At the hospital, nurses did a strength test which highlighted significant differences in Miss Rust’s strength on her left and right side.

She was checked over for shingles, however nurses didn’t inspect her outer ear. 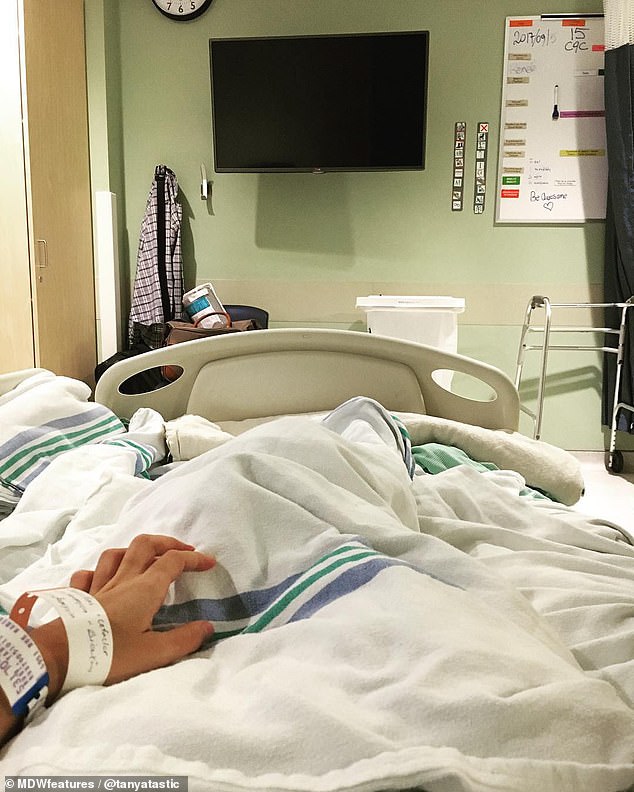 While in hospital, tests showed that Miss Rust was experiencing a loss of strength on one side. They tested for shingles but did not see a spot-like mark on Miss Rust’s ear 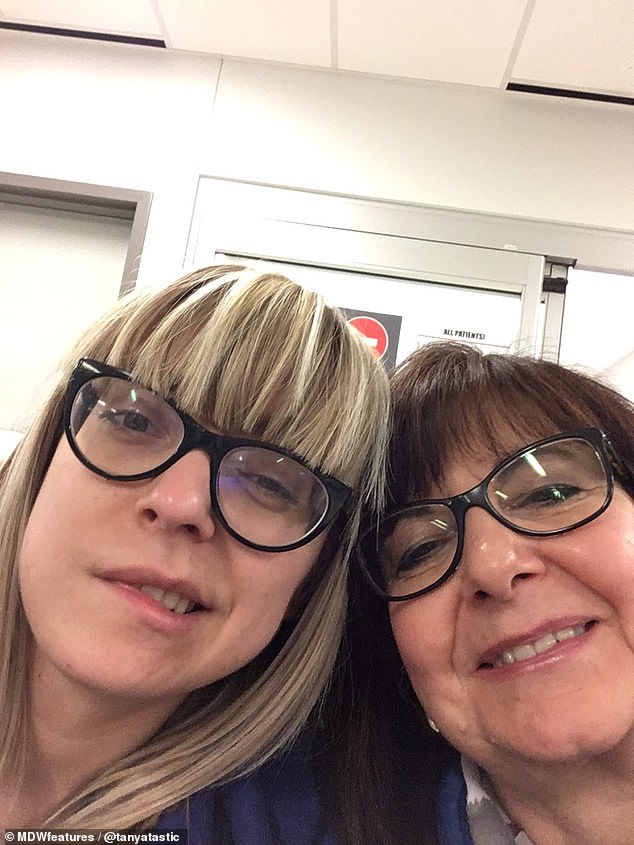 Doctors missed the shingles on Miss Rust’s ear before sending her home for eight days. Pictured in hospital with her mother just before her diagnosis of Ramsay Hunt Syndrome (RHS), a complication of shingles which is ideally treated within 72 hours 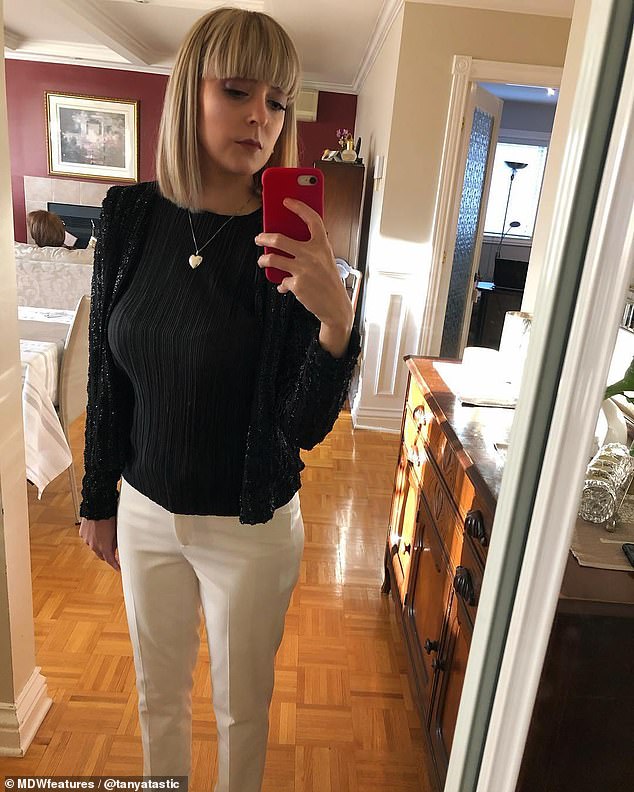 Due to her late diagnosis, Miss Rust now has functional neurological disorder. She experiences hand tremors among other symptoms, hyperacusis which is hypersensitive hearing, and frequent tinnitus

Miss Rust was misdiagnosed with Bell’s palsy and was told to return for a neurological exam the following day.

She said: ‘I was at the hospital by 10pm Saturday night, about two hours after I realised I couldn’t close my right eye.

‘Initially, they performed an electrocardiogram to rule out a stroke and luckily that was ruled out straight away.

‘Then the nurses had me squeeze their fingers with all my might and noticed a significant difference in the level of strength between both sides.

‘They briefly checked for shingles in the ear canal but didn’t check my outer ear thoroughly, as they missed a shingle that had formed.

‘The doctor told me that I was his first patient ever with facial palsy, which didn’t fill me with confidence.’

Miss Rust was sent home and spent eight days in her own surroundings, in which time she watched her symptoms develop further.

She said: ‘I had excruciating pain and further paralysis set in in my face, difficulty eating and drinking beverages. I even had to eat applesauce out of a straw.

‘My ear was itchy and the sore, which I thought was a pimple, had two other sores near it that hurt to touch.’

Miss Rust returned to the hospital where they discovered the previously unseen shingles on her ear.

Doctors diagnosed Miss Rust with Ramsay Hunt syndrome (RHS), a complication of shingles which can be caused by stress and be difficult to diagnose.

RHS describes the symptoms of a shingles infection affecting the facial nerve, and is ideally treated within three days of the onset.

Figures suggest that five in every 100,000 adults in the US will develop RHS. It poses a similar threat in the UK, according to the NHS. 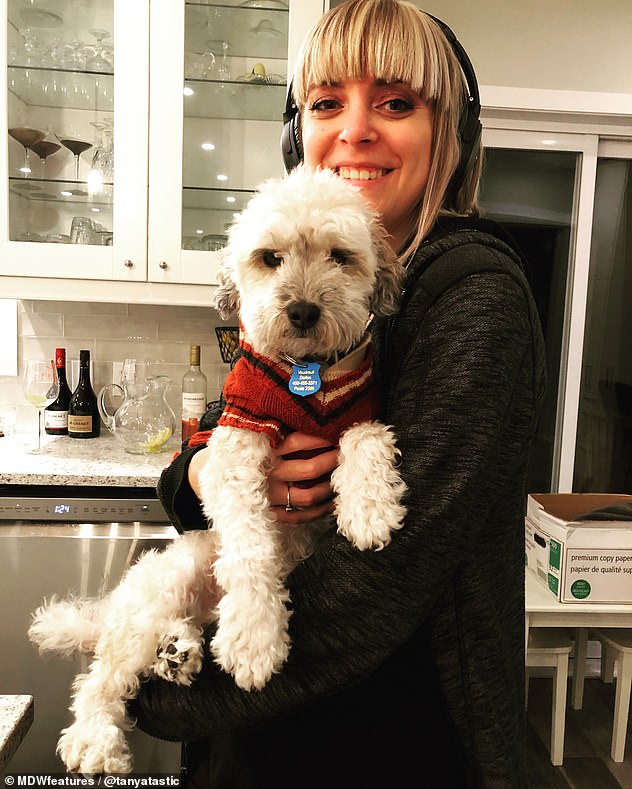 Miss Rust experiences hand tremors among other symptoms, hyperacusis which is hypersensitive hearing, and frequent tinnitus 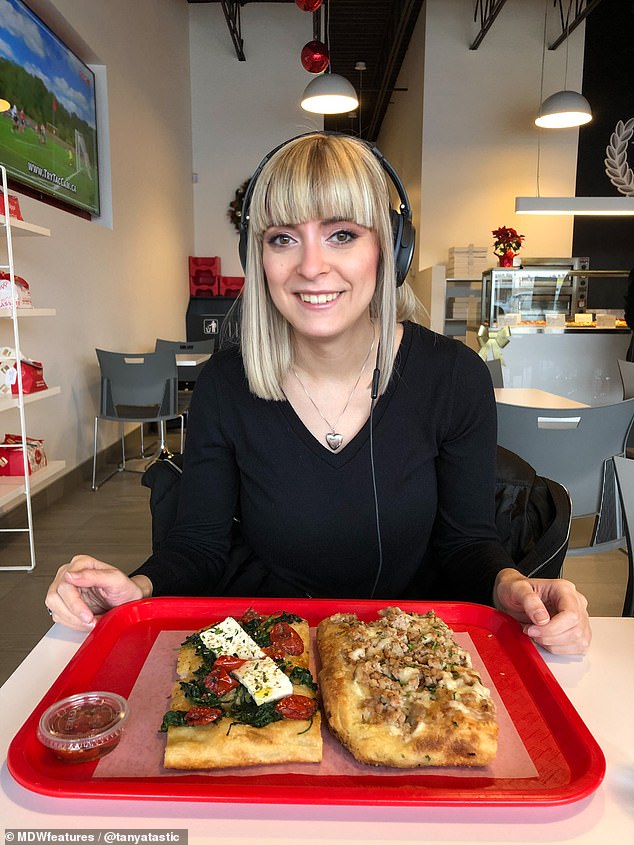 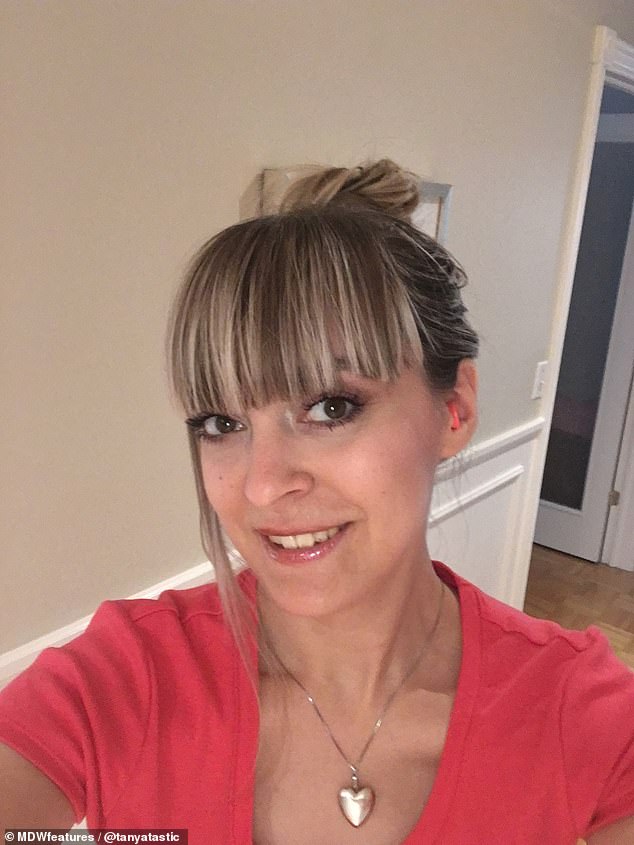 Miss Rust, pictured wearing earplugs, was told her brain had remained in a ‘confused state’ after her shingles. She said her nerves are ‘aggravated’

WHAT IS FUNCTIONAL NEUROLOGICAL DISORDER?

Functional neurological disorder (FND) is a medical condition in which there is a problem with the functioning of the nervous system and how the brain and body sends and receives signals.

FND patients can experience a wide range and combination of symptoms that are physical, sensory and/or cognitive. The most common include:

• Functional sensory disturbance includes altered sensation; e.g. numbness, tingling or pain in the face, torso or limbs. This often occurs on one side of the body

• Functional visual symptoms; including loss of vision or double vision

• Dissociative (non-epileptic) seizures, blackouts and faints: these symptoms can overlap and can look like epileptic seizures or faints (syncope)

The exact cause of FND is unknown. Studies have shown that there may be triggering factors like a physical injury, infectious illness, panic attack or migraine which can give someone the first experience of the symptoms.

These symptoms normally settle down on their own. However, in FND the symptoms become ‘stuck’ in a ‘pattern’ in the nervous system.

Miss Rust said: ‘Eight days after I was initially diagnosed, I went back to the hospital and was re-diagnosed with Ramsay Hunt Syndrome (RHS), which is shingles in the affected ear and facial palsy.

‘I was told the recovery process would be slower and I could possibly have permanent damage because of the shingles.’

The delayed diagnosis put Miss Rust at risk of permanent damage – if antiviral treatment is not given within a 72 hour time frame, then the likelihood of making a full recovery reduces to 50 per cent, according to Facial Palsy UK.

In September 2017, Miss Rust was diagnosed with functional neurological disorder, a debilitating disorder with similarities to Parkinson’s disease and MS.

She experiences hand tremors among other symptoms, hyperacusis which is hypersensitive hearing, and frequent tinnitus.

It is unknown what the prevalence or the cause of the condition is, but risk factors of developing the disorder include stress, personality disorders, distressing life events and trauma.

‘The doctors believe that’s because I wasn’t treated for the shingles on time, so my brain stayed in this confused state.

‘The pain was unbearable, I felt like I was being stabbed in the face and ear. I also started having an increased sensitivity to sound which became more and more of a problem even as I recovered.

‘Because of my hypersensitive hearing, I have to wear noise cancelling headphones when I go out. My nerves are still aggravated and are sending mixed signals to my brain.’

Miss Rust has had to come to terms with the shock of her condition, which stemmed from one day nearly two years ago.

She said: ‘Mentally I struggled fighting off thoughts like, “will I ever be normal again?” Or, “what if my smile never comes back?”

‘My hope is that I can continue to inspire hope to people who are struggling with any type of chronic illness as I know it is difficult to find support.

‘My channel, Tanyatastic Talks [on YouTube], has opened up a world I couldn’t understand prior to this experience. I’ve been able to help people who have experienced these health issues and help educate others who have not.’

WHAT IS RAMSAY HUNT SYNDROME? THE RARE COMPLICATION OF SHINGLES THAT LEADS TO FACIAL PARALYSIS

Ramsay Hunt syndrome is a complication of shingles, caused by the same virus as chickenpox (VZV), that can lead to facial paralysis.

The virus becomes reactivated after laying dormant for years and causes inflammation and irritation on the facial nerves.

VZV is harmless unless it is reactivated and should this happen new symptoms will appear.

The virus can be reactivated when the immune system is weakened, and less able to fight off infection. Stress is often a trigger.

Figures suggest that five in every 100,000 adults in the US will develop RHS. It poses a similar threat in the UK, according to the NHS.

Children are rarely affected by RHS, as the complication most often affects adults in their 60s.

What are the symptoms?