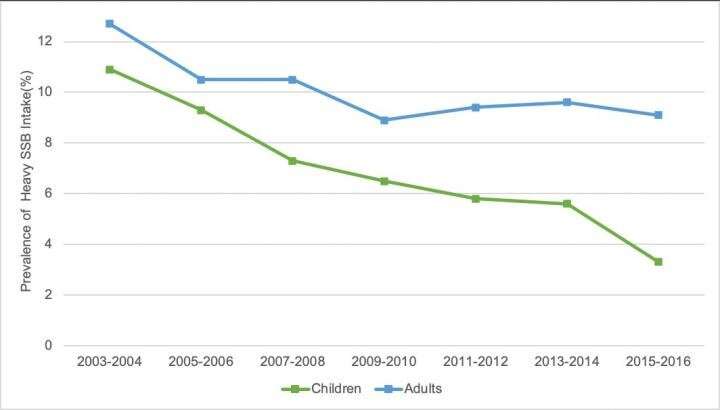 SSBs are widely consumed in the US, by about 60 percent of children and 50 percent of adults on a typical day, and they represent one of the largest sources of added sugar in the diet. Heavy sugary beverage drinkers are an important group to monitor since excessive intake is linked to chronic conditions like obesity and diabetes as well as cavities. In recent years, concern about excessive SSB consumption has been addressed through various strategies. For example, a number of cities and counties have imposed beverage taxes and passed several healthy beverage ordinances requiring restaurants to offer only healthy beverages with children’s meals.

Studies looking at the changing consumption of sugary beverages have generally shown declines over the past decade. Unlike this study, however, little of the prior research has concentrated on heavy SSB drinkers, people who consume more than the equivalent of about 3.5 cans of soda daily.

The investigators used data from 2003 to 2016 for a sample of more than 20,000 children and 30,000 adults from the National Health Examination and Nutrition survey (NHANES), which provided a nationally representative look at beverage consumption for adults and children. In addition to looking at changes in consumption over time by heavy SSB consumers overall, the investigators looked at trends by age, sex, race/ethnicity, and family income level, as well as purchase and consumption locations.