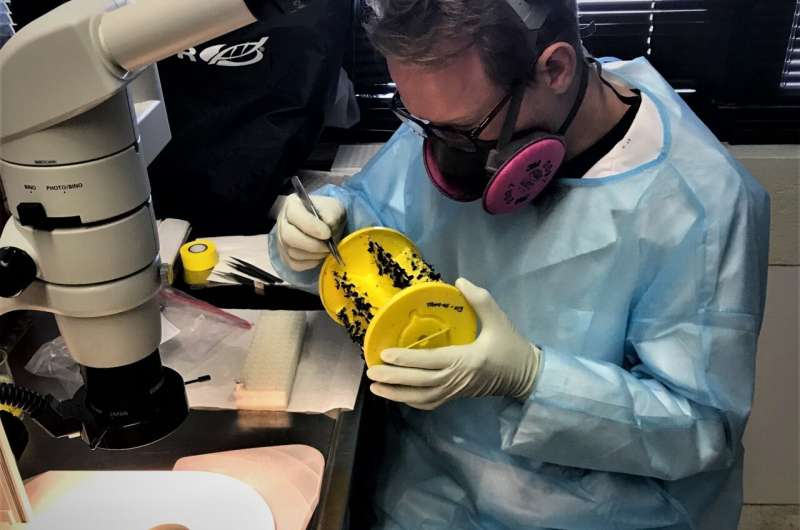 Insects like biting flies and cockroaches are not likely to spread the agent of COVID-19 to humans, according to a recently published article by Texas A&M AgriLife Research scientists.

Public health experts and officials know much more about the spread of COVID-19, but concerns remained about how the virus spreads indirectly from human to human through contaminated surfaces, animals or insects.

Insects are known to spread many infectious diseases among humans, so evaluating the role of insects in the potential transmission of SARS-CoV-2 was a high priority in the early stages of the COVID-19 pandemic, according to study co-author Gabriel Hamer, Ph.D., AgriLife Research entomologist in the Texas A&M Department of Entomology.

The published article, “No Evidence of SARS-CoV-2 Among Flies or Cockroaches in Households Where COVID-19 Positive Cases Resided” in the Journal of Medical Entomology covers the project and the team’s finding.

The team included Gabriel Hamer, Sarah Hamer, Ph.D., DVM, associate professor of epidemiology at Texas A&M’s College of Veterinary Medicine and Biomedical Sciences, along with the help of research associates and graduate students and other faculty in the Department of Entomology in the College of Agriculture and Life Sciences and School of Public Health. The lead author, Chris Roundy, Ph.D., was a post-doctoral student in the Department of Entomology at the time and is now working in the Colorado Department of Public Health and Environment.

“We were sampling insects in homes with recent human COVID-19 cases, some of which also had dogs and cats actively infected with SARS-CoV-2,” Gabriel Hamer said. “We suspected these were high-risk environments where insects may be able to become contaminated with the virus if they were contacting the infected humans, animals or contaminated surfaces. Instead, we did not detect evidence of the virus in the sampled insects from these homes.”

Previous work by the research team, funded by the Centers for Disease Control and Prevention, discovered the transmission SARS-CoV-2 from humans to pet dogs and cats was occurring in households with confirmed positive human COVID-19 cases. More recently, the team has also been studying SARS-CoV-2 transmission among white-tailed deer in Texas.

Testing flies and cockroaches for COVID-19

Scientists, including the Texas A&M COVID-19 and Pets Project Team, discovered that animals like cats and dogs were susceptible to SARS-CoV-2 infection and could shed infectious virus. But less was understood about the potential transmission by insects, especially through mechanical transmission of contaminated mouthparts.

Previous experimental studies done by other researchers had shown that both the infectious virus and viral RNA were detectable in house flies after being exposed to SARS-CoV-2 in a laboratory setting. The AgriLife Research field study did not find any evidence that these insects were obtaining SARS-CoV-2 viral RNA in natural household settings.

As part of the investigation, Hamer and other AgriLife Research scientists processed the contents of 133 insect traps in 40 homes that each had at least one confirmed human COVID-19 case present. Sticky traps collected more than 1,345 individual insects representing 11 different fly and roach species from June to September 2020.

The insects were tested using quantitative reverse transcription PCR. The liquid in additional trap types was also tested after RNA concentration. The individual insects were grouped into 243 pools, and all tested negative for SARS-CoV-2.

Fourteen traps in seven homes were placed into homes the same day dog or cat samples tested positive for the virus, further increasing the opportunity for the insects to come into contact with contaminated animals or surfaces.

The study presents evidence that biting and non-biting flies and roaches are not likely to spread the virus via mechanical transmission or be useful as a surveillance tool to track the transmission of SARS-CoV-2.