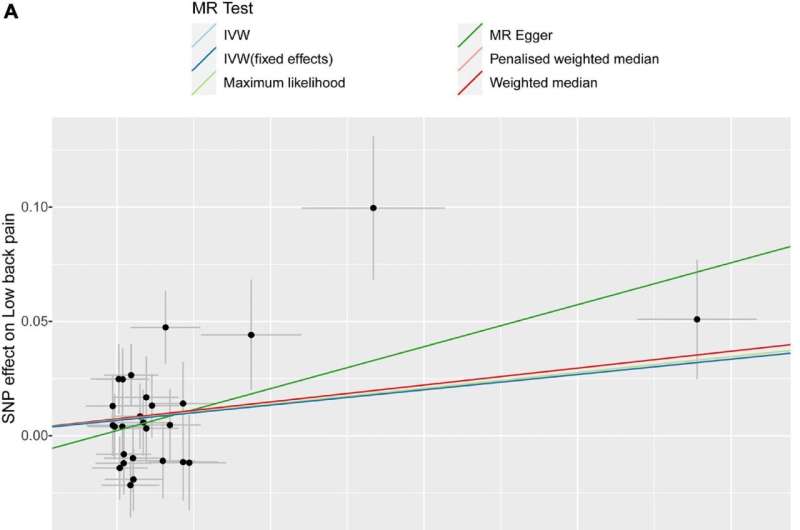 Throughout the course of their life, most humans are likely to experience some form of lower back pain. This pain is sometimes associated with injuries, chronic back issues, medical conditions, the menstrual cycle or pregnancy, and other underlying physiological causes. In many cases, however, pinpointing the origin of lower back pain is difficult, despite its severity and its potential impact on the day-to-day life of those affected.

Researchers at Zhejiang University School of Medicine have recently carried out a study exploring these recent findings further, by trying to better understand the relationship between sleep and lower back pain. Their findings, published in Frontiers in Neuroscience, suggest that there is a bidirectional causal relationship between insomnia and lower back pain, with each potentially causing the other.

“Previous observational studies have shown that low back pain often coexists with sleep disturbances, however, the causal relationship remains unclear,” Ge Luo, Yuanyuan Yao, Jiachun Tao, Tingting Wang and Min Yan wrote in their paper. “In the present study, the causal relationship between sleep disturbances and LBP was investigated and the importance of sleep improvement in the comprehensive management of LBP was emphasized.”

Luo and his colleagues examined the self-reported and genetic data of over 400,000 people of European ancestry, collected as part of the genome-wide association study (GWAS) by the UK Biobank. These people had completed genetic tests and answered a series of questions about their sleep patterns.

To infer a possible causal relationship between poor sleep and lower back pain, they used Mendelian randomization (MR), a relatively new technique that allows scientists to use measured genetic variations to unveil possible genetic and environmental risk factors that could cause poor health or specific conditions.

In the future, these results could inspire further studies exploring the relationship between poor sleep and insomnia, potentially incorporating people with other ethnic and genetic backgrounds. In addition, the work by Luo and his colleagues could promote the exploration of therapeutic interventions for lower back pain that also target insomnia and unhealthy sleeping patterns.

“The main results of our research showed a potential bidirectional causal association of genetically predicted insomnia with lower back pain,” Luo and his colleagues wrote in their paper. “Sleep improvement may thus be important in comprehensive management of LBP.”