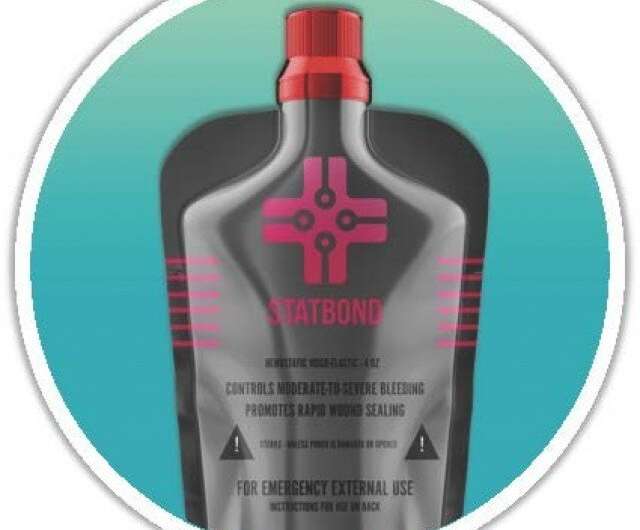 A new medical technology stops traumatic bleeding without requiring wound compression for Soldiers on the battlefield. Hemorrhaging is a leading cause of preventable death for Soldiers in combat.

The simplicity, potential for deployability and proposed affordability of this technology under development allows Soldiers to carry a life-saving solution in their pocket.

Through a project funded by the Defense Health Agency Small Business Innovation Research, or SBIR, program, Hybrid Plastics, the University of Mississippi Medical Center, Vanderbilt University and Ichor Sciences developed StatBond, which treats uncontrolled bleeding from noncompressible areas of the body that include the groin, trunk, armpit, neck and internal organs. Currently, there is no battlefield treatment for such bleeding because these injuries are not responsive to the compression dressings currently carried by Soldiers and medics.

The Defense Health Agency supported the research and development of this device as a part of an SBIR contract, with technical oversight provided by the Army Research Laboratory, an element of the U.S. Army Combat Capabilities Development Command, known as DEVCOM.

“This technology provides a new capability to stop bleeding under austere conditions,” said Dr. Robert Mantz, a chemistry branch chief with ARL at its Research Triangle Park location. “It’s encouraging to see the potential applications of breakthrough basic science research being put into the hands of Soldiers.”

A new medical technology, StatBond stops traumatic bleeding without requiring wound compression for Soldiers on the battlefield. Hemorrhage is the leading cause of preventable death for Soldiers.

The research team identified that visco-liquid hemostatic agents could be an alternative treatment to compression. The liquid characteristic provides for deep penetration into a wound channel, and the immediate suppression of fluid loss.

“The breakthrough nature of the device lies in the ability of the hemostatic gel to flow deeply into penetrating wounds, and immediately seal against fluid loss, thereby allowing the natural blood clotting cascade to happen against the surface of the gel,” said Dr. Joe Lichtenhan, vice president of Technology, Hybrid Plastics, a Mississippi-based nanotechnology company. “It is really remarkable this device works without compression. It offers the potential for Soldiers to self-treat or to provide non-medic buddy care.”

The technology behind the development is based on proprietary silicon-like formulations developed by Hybrid Plastics. The Royal Society of Chemistry journal Dalton Transactions (2017) published preliminary findings of their research.

The research team finds that visco-liquid hemostatic agents could be an alternative treatment to compression. The liquid characteristic provides for deep penetration into a wound channel, and the immediate suppression of fluid loss.

In addition to treating traumatic bleeding injuries, StatBond can also be used to treat lung punctures, eye injuries, burn wounds and prevent infection. Bleeding may not be associated with these types of injuries, but they all commonly have a need to prevent fluid loss and maintain tissue viability. For these injuries, Statbond seals the damaged tissue against further fluid loss while retaining oxygen transport to the injury, which aids in tissue preservation and supports the natural healing process and tissue regeneration.

Statbond is undergoing FDA registration and packaging development. For civilian use, it will be packaged in syringe form while warfighters are anticipated to be provided the device in the form of a durable pocket carry squeeze pack.

In contrast to the basic research programs managed by ARO, this program focuses primarily on feasibility studies leading to prototype demonstration and productized testing for specific applications. The SBIR program funds research and technology development with small businesses using a three-phase process.

With the success of Phase I and II, the Army awarded the research team a Phase III contract to the team to further mature the technology. As part of the award, the team will advance the device’s manufacturing readiness level to pilot line capability and the Department of Defense will conduct medical investigations on its performance and potential for deployability for treatment of battlefield polytrauma.