I’m holding forth at the neighbourhood barbecue, trying to win some sympathy for my upcoming surgery. I have successfully seized the attention of the group.

“I might not see you again,” I say, my chin held high. “It’s a pretty serious business. It involves a laser. Military-grade, I’d imagine. Anyway, I hope you’ll wish me luck.”

My throat croaks with a sound that combines a sob with plucky defiance. If you’d care to imagine Captain Oates, marching from his tent into the blizzard – “I am just going outside and I may be some time” – you’ll understood the mood I was trying to convey. 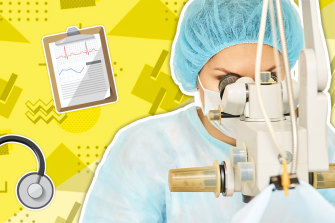 At a certain age, surgical procedures become the bread and butter of conversation.Credit:Kathleen Adele

Privately, my mind is running through the calamity that might occur at 9am the next day, when the operation begins. There’d be a moment of distraction just as the surgeon unsheathed his laser gun from the holster – a car backfiring outside; the “oh, what was that sound?”; the involuntary movement of his arm – then the Zorro-style “Z” carved into my chest, smoke rising from my exposed heart. Next, the surgeon’s panicked voice: “Nurse! The screens! The screens!”

I express none of this scenario to the group, focusing instead on my incredible bravery. Sadly, Jocasta is also present at the neighbourhood barbecue. She ruins my story.

“It’s not an operation, more a procedure,” she explains to the group. “He’s just having a cataract removed. He’ll be in there for about ten minutes. While I wait to pick him up, I’m going to do the supermarket shopping, over the road at Westfield.”

The group instantly loses interest in my story. Jocasta knows it’s the humdrum detail – shopping, Westfield – that can destroy the most dramatic of tales.

Within seconds, my friend Paul has seized centre stage. It’s now all about Paul and his new knee. Oh, how I envy him. He has a scar and everything. He does a little dance, showing his new knee in action, and everybody applauds.

At a certain age, surgical procedures become the bread and butter of conversation. Thirty years ago, a frank disclosure of a hangover would win the admiring attention of the group; now it’s triple bypass surgery or they hardly look up from their potato salad.

I may need to book in for a major operation, just to compete. I’m not without prospects. One doctor has already told me that I’m a “candidate for a knee replacement”, while another said I was a “likely candidate for glaucoma”.

The word “candidate” makes it all sound so aspirational. It’s like I’m in the running for a Rhodes Scholarship or a job at the UN. What am I meant to do? Dream that, one day, my candidacy might be successful?

Anyway, that’s for the future. Right now, I must square my shoulders in preparation for tomorrow’s ordeal.

The next morning, we hop into the car. Jocasta makes some show of bringing a million shopping bags and an Esky, observing that we are totally out of frozen peas. “I wouldn’t mind also picking up some bin-liners,” she adds, as if keen to rub in the mundane nature of the excursion.

Once I’m there, the medical people attempt to ease my nerves. The laser, it turns out, is embedded in a large, stationary machine, your eyeball placed beneath it. The chance of a burning Zorro-style “Z”, emblazoned on my chest, appears small.

Instead, the surgeon marks the left of my forehead with a large “X”, which does seem a little One Flew Over the Cuckoo’s Nest. I wonder, momentarily, whether I’ve wandered into the wrong place. Should I say something? You’d feel a fool if you didn’t.

“Well,” the surgeon could rightly say, “I did mark the spot at which I intended to drill.”

As it happens, the doctor is patient with the patient. Maybe that’s where the word “patient” comes from. Large reserves of the stuff are required as soon as we walk in the door. The “X”, the surgeon explains, appears above the eye which needs the work.

From that point on, the whole thing takes about 30 minutes. It’s largely painless and they give you a selection of cheese and biscuits at the end, including at least five Jatz crackers, which borders on the profligate.

Jocasta arrives to pick me up. She calls me a “brave soldier” and holds my hand as we cross the street. At this point, I’m unsure whether she’s my carer or my lover, but her hand feels good in mine.

As we drive off, she tells me about her purchases in the frozen vegetable department, which I think is code for: “You’ll be right by tomorrow”. By the next day, she’s proved correct. I can already see perfectly through the new eye. Isn’t modern medicine a marvel?

Mind you, the perfection of the new eye draws attention to the eye they are yet to fix. I’m considering taking up a monocle. It may be my only way of winning some attention at the next neighbourhood barbecue.

To read more from Spectrum, visit our page here.

A cultural guide to going out and loving your city. Sign up to our Culture Fix newsletter here.