The unnamed woman went to a beautician in St. Louis, Missouri, with what looked like a collection of blackheads under her arm.

The beauty therapist, named Jada Kennedy, gently squeezes the inflamed skin, only for thick ‘snakes’ of pus to emerge. 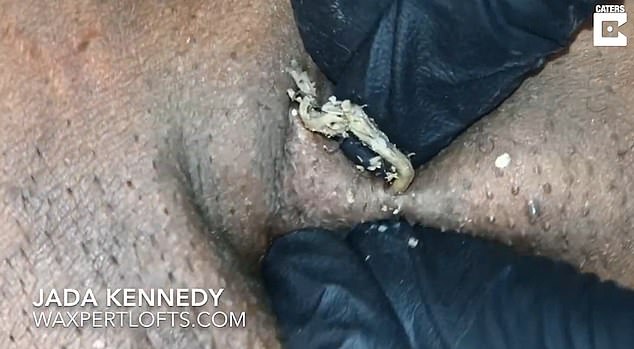 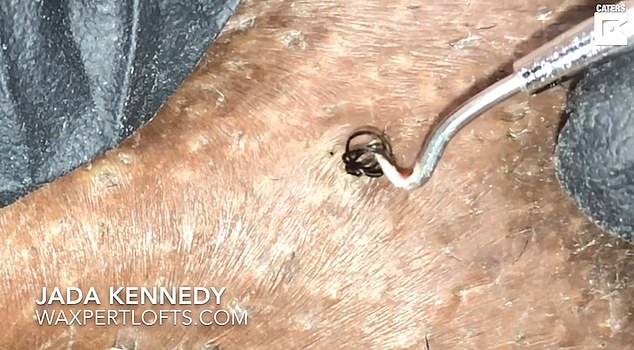 A beauty therapist, named Jada Kennedy, extracted the pus in the ‘procedure’. The footage ends with her taking a ‘hook’ to pull out a long, ingrowing hair (pictured) from the under arm

Ms Kennedy thinks the nauseating ‘procedure’ is over, only for further streams of pus to come rushing out.

The clip ends with her pulling a ‘hook’ of ingrowing hair out of the patient’s armpit.

The footage opens with Ms Kennedy explaining to the viewers a ‘new client has come to her’.

‘Y’all are gonna be so amazed at what comes out,’ she excitedly said.

Without going into detail, she claims ‘deodorant’ may be to blame but adds ‘it may be a cyst, I’m not a doctor, I don’t know’.

WHY DO PEOPLE ENJOY SQUEEZING SPOTS?

In July 2018, a neuroscientist explained it is normal for people to be engrossed and amazed by videos of pimples being popped.

The internet obsession is popular due to certain people having evolved to get pleasure from bumps being removed from the skin.

Videos like those made by the dermatologist Sandra Lee, aka Dr Pimple Popper, are common on social media, with the Californian doctor even having her own TV show.

Neuroscientist Heather Berlin, from Mount Sinai Hospital, New York, says it is all down to people’s need to stay healthy and remove possibly dangerous things from their bodies.

She told the Washington Post: ‘Evolutionarily speaking, it’s normal behaviour to want to remove bumps from your skin.’

This is due to such bumps potentially being parasites or other unwanted visitors, Dr Berlin explained.

She added squeezing spots stimulates part of the brain that reacts to dopamine, a reward chemical, and gives people ‘a little hit of pleasure’.

Deodorant has not been linked to pus accumulating beneath the arm.

Boils can occur following an infection of a hair follicle or oil gland. The bacteria then builds up in the form of pus and dead skin, causing the area to become red and raised.

Ms Kennedy, who ‘enjoys squeezing it out’, than wipes some ‘alcohol’ over the armpit.

Alcohol has been shown to reduce pathogens accumulating on a wound.

Ms Kennedy then turns to an inflamed area of skin that she knows is going to be her favourite.

After applying just a small amount of pressure to the ‘blackhead’, a grey-tinged, thick stream of pus emerges, with ‘long strands of hair’ attached.

Ms Kennedy removes the pus in one piece using tweezers and presents it to the camera.

With the ‘procedure’ far from over, Ms Kennedy continues to extract thick chains of pus from other areas of the woman’s armpit, which she compares to play dough.

She then explains she is ‘coming to the end’ of the extraction due to her having to apply more pressure to get the pus out.

Ms Kennedy added: ‘I really don’t know what this is. I don’t think it’s a blackhead. I think it’s just built-up deodorant.’

Deciding to give it ‘one more push’, more ‘snakes’ of pus come out, with Ms Kennedy exclaiming: ‘It’s like never stopping!’

The camera spans to pieces of the pus laid out on kitchen paper.

Ms Kennedy then uses a ‘hook’ to pull out a long strand of curly black hair from the patient’s armpit.

‘I am the queen of ingrowns [ingrowing hair],’ she said. 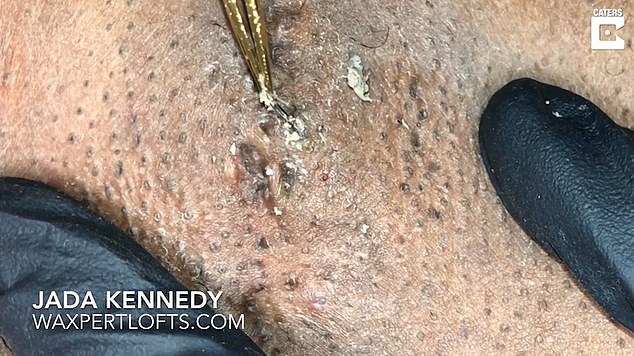 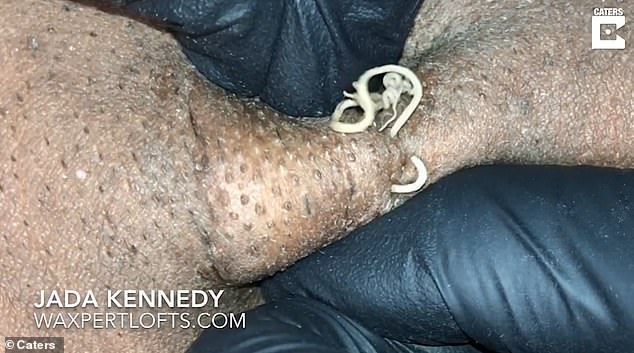