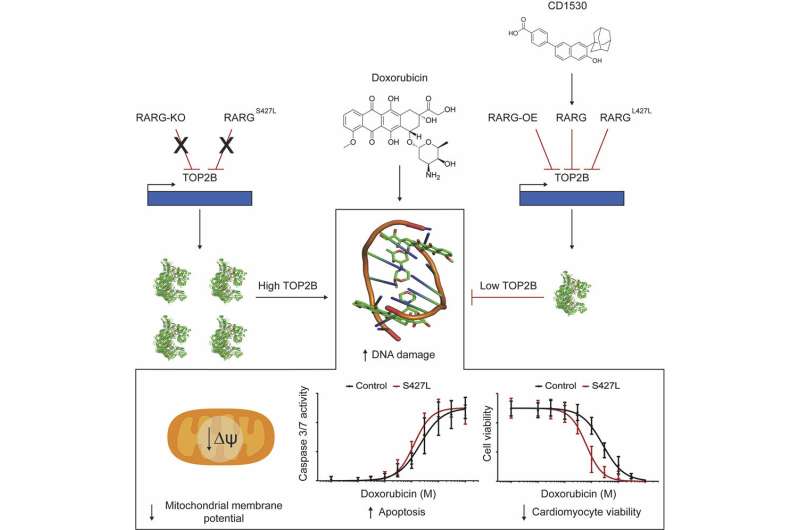 Harmful side effects from a common chemotherapy drug could be the result of a single mutation, according to a study published in Cell Stem Cell.

The cardiotoxic effects of the chemotherapy drug doxorubicin could be prevented in patients with the mutation by treating them with retinoic acid, according to Paul Burridge, Ph.D., assistant professor of Pharmacology and senior author of the study.

“In the future patients could be given CD1530, or a similar drug, and this would reduce their chances of experiencing cardiotoxicity,” said Burridge, who is also a member of the Robert H. Lurie Comprehensive Cancer Center of Northwestern University.

Doxorubicin is the most common chemotherapy drug, mostly used in children and in breast cancer. However, patients taking doxorubicin experience dose-dependent cardiotoxicity; as many as 10 percent of childhood cancer survivors will develop heart failure during the 30 years after their treatment.

A previous study authored by collaborators from the University of British Columbia, Vancouver, showed that people who experience cardiotoxicity from chemotherapy were more likely to have a genetic variation called a single nucleotide polymorphism (SNP) in a gene called retinoic acid receptor gamma (RARG).

In the current study, Burridge and his collaborators created patient-derived heart cells with this SNP and treated them with doxorubicin, finding that those cells indeed were more sensitive to the treatment. Further, when they corrected the mutation using genetic editing tools, the additional toxicity went away.

“This confirmed to us that RARG is important in doxorubicin cardiotoxicity sensitivity,” Burridge said.

The investigators tested several drugs that might reverse the downstream effects of this mutation, finding that one drug—called CD1530—made cardiomyocytes less sensitive to the chemotherapy. The drug works by activating retinoic acid receptors that are usually left inactivated in patients with the SNP, preventing activation of a cardio-protective pathway that is ill-suited for chemotherapy.

Burridge said this study illustrates the utility in pre-chemotherapy genetic screening, and shows how precision medicine can be a powerful tool in chemotherapy. Next, the investigators hope to test this drug in human patients.