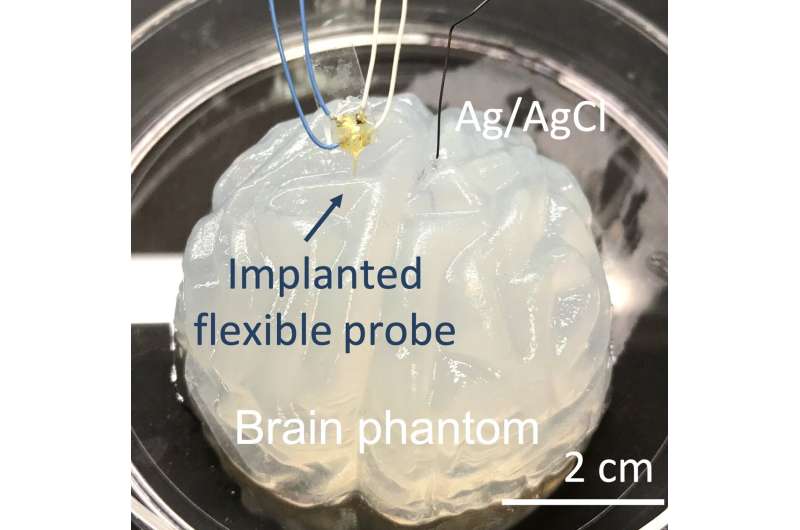 Anyone familiar with antidepressants like Prozac or Wellbutrin knows that these drugs boost levels of neurotransmitters in the brain like serotonin and dopamine, which are known to play an important role in mood and behavior.

It might come as a surprise, then, that scientists still have very little data about the specific relationship between neurotransmitters—chemicals that relay messages from one brain cell to others—and our psychological states. Simply put, monitoring fluctuations of these neurochemicals in living brains has proved a persistent challenge.

Now, for the first time, UCLA scientists have attached nanoscale biochemical sensors, which are tuned to identify specific neurotransmitters, to a soft, implantable brain probe in order to continuously monitor these chemicals in real time. The new brain probe, described in a paper published in ACS Sensors, would allow scientists to track neurotransmitters in laboratory animals—and, ultimately, humans—during their day-to-day activities.

The ability to continuously measure neurotransmitters in high resolution over long periods would provide a more accurate understanding of how serotonin, dopamine and other neurotransmitters affect psychological states, potentially leading to more effective treatments for depression and other mental health disorders, said the paper’s corresponding author, Anne Andrews, a UCLA professor of psychiatry and biobehavioral sciences and of chemistry and biochemistry.

“We know serotonin and dopamine are involved in some of the behavioral aspects of depression, but the causes are complex and not as simple as having low levels of a single transmitter,” said Andrews, who is also a member of UCLA’s California NanoSystems Institute and Hatos Center for Neuropharmacology. “We think this type of soft probe will be useful for studies of long-term brain processes in experimental animals—especially the processes that underly psychiatric disorders.”

The soft probe represents a significant advance over conventional brain probes, whose rigidity can irritate brain tissue with every head movement, leading to inflammation that often disrupts the probe’s ability to read and record. The flexibility of the soft probe would allow an individual to move freely while being monitored, the researchers said. 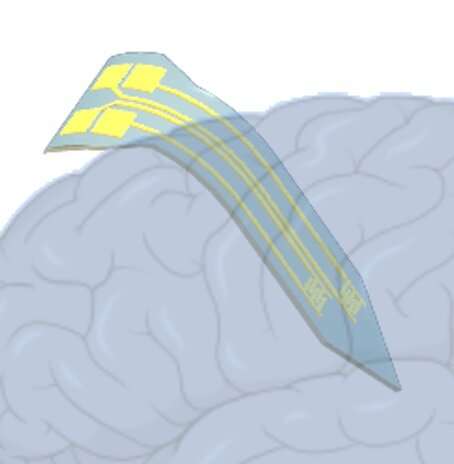 Designing and testing the soft probe

The research team fabricated the small arrow-shaped probe, which is roughly 0.15 millimeters wide and 0.007 millimeters thick, on a base of polyimide, a sturdy yet flexible polymer frequently used in medical tubing, like catheters, and in other medical devices that are inserted into the body.

Two sensors attached to the probe’s tip detect the presence of a specific neurotransmitter—in this case, serotonin—using engineered strands of DNA called aptamers, which are designed so that serotonin molecules fit into them like a key in a lock. When serotonin attaches, the aptamers change shape in a way that alters electrical fields at the surface of a transistor, relaying the information to scientists.

The soft probe was then implanted into a brain model that mimics the structural and chemical properties of natural brain tissue by first author Chuanzhen Zhao. Zhao, who earned his doctorate in chemistry and biochemistry at UCLA and is now a postdoctoral scholar at Stanford University, injected serotonin into the model near the probe and found that the probe’s sensors successfully detected low levels of serotonin similar to those occurring in a living brain.

Although the current research targeted serotonin, Andrews noted that the researchers could easily place additional neurotransmitter-specific sensors—which her group has already developed—on the soft probes, enabling scientists to detect multiple neurotransmitters simultaneously. And while the probe has not yet been tested in living brains, the ability to monitor several neurotransmitters, coupled with the probe’s flexibility and longevity, could ultimately prove a boon for scientists studying brain processes in animals over the long term.

“For example, if we want to study what happens in the brain while an animal is learning a task or during aging, our sensors can give multiple neurochemical measurements over long periods of time,” she said.

The researchers said the soft probes could also potentially be used to help improve deep brain stimulation therapy, in which electrodes implanted in the brain regulate neural electrical firing in diseases such as Parkinson’s and epilepsy, as well as brain-machine interfaces, which are hindered by the rigidity of their substrates.

Zhao and Andrews recently used similar aptamer-field-effect transistor biosensors on polyimide to monitor levels of the stress hormone cortisol in people’s sweat via a smartwatch.