When Jennie Cornish nervously turned up at a women-only cycle club on one of her children’s old bikes to learn to ride, she was adamant about three things: she would never venture onto a road, put cleats on her shoes or wear Lycra.

Now aged 66, she’s happily doing all three and today is part of an 18-strong group of female cyclists who’ve just begun a 1200-kilometre ride from Melbourne to Adelaide. 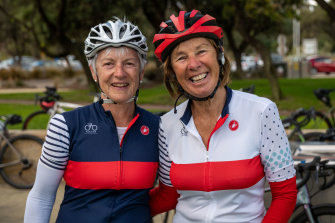 Jennie Cornish (left) is part of Ladies Back on Your Bike, set up by Jacinta Costello in 2013.Credit:Jane Austin

“I hadn’t ridden since my children were very young and never thought I would again,” says Cornish, a retired food and nutrition worker from Melbourne’s Caulfield South. “But now I’m hooked.

“I feel so good, I’m the fittest I’ve been in a long time and, through the club, I’ve made so many great new friendships.”

That club, Ladies Back on Your Bike (LBOYB), was set up in 2013 by former Phys Ed teacher Jacinta Costello, now 68, for exactly those reasons.

Always a keen cyclist herself, she longed to see more older women out cycling but realised many hadn’t ridden since schooldays and were uneasy at the thought of getting back onto two wheels.

“The sense of community and camaraderie that’s formed between the women is incredible.”

So she drew up a plan for offering riding instruction, a series of fun group rides and then graded trips. Since then, she and the team of fellow instructors she’s recruited have taught over 1000 older women to ride, given them basic mechanics classes and have taken them on many thousands of rides, some as far afield – pre-COVID – as Killarney in Ireland to Bruges in Belgium, through Denmark and around Poland.

“These women have been incredibly gutsy just turning up on their first day,” says Costello, from Brighton. “We take them on a test ride to see how they are and give them tips and encourage and support them.

“The crux of it all is that they then ride with a group so are never intimidated or bored, and the sense of community and camaraderie that’s formed between the women is incredible. They make fantastic friendships, they lose weight, they get fitter and healthier and they often end up choosing two wheels over four.” 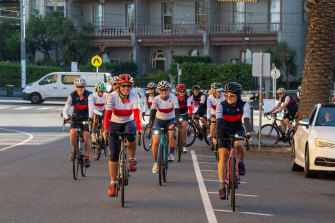 The group setting off from St Kilda for Adelaide.Credit:Jane Austin

Now a group of riders, aged up to 78, have set out on their ride to Adelaide to raise money for the Kathryn Browne-Yung Foundation, providing scholarships to Aboriginal medical students. Many of their fellow members are turning out en route to cheer them on.

With similar women’s riding clubs being started all over Australia, that’s wonderful news for people like Professor Anne Tiedemann, a research fellow in physical activity for healthy ageing at Sydney University.

“If you find an activity you enjoy, then you’re much more likely to keep doing it, and women in particular love being part of a group so you can support each other and see what you’re achieving,” she says. “And cycling is something you can take up at any age, as long as you don’t have a chronic health condition, and still get the benefits.

“Around 50 per cent of people over 65 aren’t meeting the recommended levels of activity of at least 150–300 minutes of moderate-intensity aerobic physical activity a week or at least 75–150 minutes at vigorous-intensity. The risks of not being active generally far outweigh the risks of being active.”

Women, however, are chronically under-represented among cyclists in Australia, according to research by Dr Jan Garrard while at the school of health at Deakin University. She found women comprised only around one-fifth of commuter cyclists, in stark contrast with countries like the Netherlands, Denmark and Japan, where women riders outnumber men.

Anecdotally, many women took it up, however, during lockdowns when gyms were closed, says Dr Marilyn Johnson of Monash University who researches cyclist safety, only to drop out again afterwards.

“But now the biggest push with older women cyclists is with e-bikes,” Johnson says. “In exercise terms, it’s comparable to walking and it’s good for those who worry they won’t be able to get up a hill with pedal cycling, or to get back after a ride out. We’re seeing those numbers rise …”