Extremely obese people need a far higher dose of radiation during X-rays, which more than doubles their risk of getting cancer from the routine scan, research suggests.

A study of 630 severely obese adults revealed they all received much higher doses of radiation when having X-rays than people of a healthy weight.

Carrying excessive weight increases the amount of tissue that has to be imaged, which calls for a higher radiation dose, the researchers claim.

They conclude the risk of cancer caused by X-ray radiation is 153 per cent higher among obese people than their slimmer counterparts. 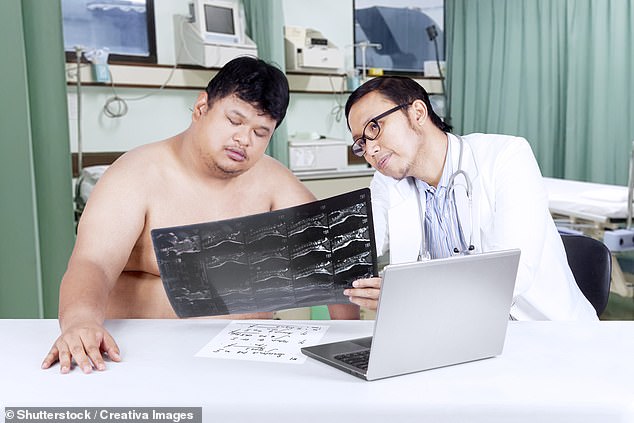 Extremely obese people need a far higher dose of radiation during X-rays, which more than doubles their risk of getting cancer from the routine scan, research suggests (stock)

The study was carried out by scientists at the University of Exeter and led by PhD student Saeed Al-Qahtani, who researches medical imaging.

Around a quarter of adults in the UK are obese, the authors wrote in the Journal of Radiological Protection. Of these, just over a tenth are morbidly obese – defined as having a BMI of 40 or more, House of Commons statistics show.

Obesity affected around 93.3million people in the US in 2015-to-2016, according to the Centers for Disease Control and Prevention. And as many as five per cent of all Americans are obese, Lahey Hospital & Medical Center, Massachusetts, data reveals.

Between March 2015 and 2016, 22.6million X-rays were carried out in England, which are thought to have caused up to 280 cancers, the authors wrote.

Study author Karen Knapp, associate professor of musculoskeletal imaging at the University of Exeter, said: ‘X-rays are an extremely important diagnostic tool and radiographers do their utmost to minimise the risk to patients.

‘However, our findings highlight the implications of increased radiation doses in severely obese patients.

‘Although the risk of cancer from X-ray is very low, we urgently need more research in patients who are overweight and obese, so we can understand how to minimise doses in this group and feed into far more robust guidelines around radiation, in turn to minimise that risk.’

The scientists analysed the cancer risk of obese people who had weight-loss surgery. To start off with, the patients had BMIs that ranged from 44.4 to 50.71.

WHAT IS AN X-RAY?

An X-ray is a painless procedure that produces images of the inside of the body to detect a range of conditions.

It causes a type of radiation to pass through the body, which then gets absorbed at different rates by different parts of the body.

A detector than picks up the X-rays after they have passed through and turns them into an image.

Dense parts of the body that X-rays find it more difficult to pass through, such as bones, show up as clear white.

Softer parts, like the heart and lungs, show up darker.

X-rays may be used to detect broken bones, tooth problems, tumours, and lung or heart problems, to name a few.

Many people are concerned about being exposed to radiation during an X-ray, however, the part of the body being examined is only exposed for a fraction of a second.

The amount of radiation used is generally the equivalent to between a  few days to a few years of that given off naturally by the environment.

The cancer risk is thought to be very small.

All of the patients had the procedures, such as a gastric band, sleeve or bypass, at Musgrove Park Hospital in Taunton between 2007 and 2015.

When looking at the radiation dose used in X-rays before their surgeries, results suggest that all of the patients received a higher dose than the national diagnostic reference level (DRL).

Gy.cm2 measures the amount of radiation that gets absorbed by a patient’s body relative to that which is given off and lost in the surrounding air.

The dose a patient is given is calculated according to their weight and the size of the room.

The above findings are concerning due to abdominal and lower back X-rays making up 3.81 and 2.53 per cent of the 231 types of scans carried out in the UK, respectively.

These scans also directly beam radiation onto the sensitive colon and stomach, and could reach the nearby lungs and breasts, the authors wrote.

To create an X-ray image, radiographers project electromagnetic energy through the body. This ‘excites’ tissue, which can cause abnormalities or programmed cell suicide, known as apoptosis.

And the higher the dose, the more likely it is to cause damage. For this reason, radiation doses are kept as low as ‘reasonably possible’ and X-rays are only carried out when needed.

The researchers calculated cancer risk by looking at the amount of radiation absorbed by a given organ against the organ’s radiation-induced cancer risk, as used by The Nuclear and Radiation studies board and the Health Protection Agency.

There is no guidance on how to minimise X-ray radiation doses in obese patients.

Mr Al-Qahtani said: ‘As a researcher and a radiographer, I believe these radiation doses figures are only to be expected due to the lack of guidelines to aid imaging this group of patients.

‘We already started working on this issue in an attempt to produce prediction models that can aid radiographers to choose the best technical factors based on the patient’s size.’

Obese people are more likely to require X-rays due to their size putting them at risk of health complications. Carrying excess weight also makes it difficult for doctors to monitor a person’s wellbeing via their heart or breathing rate.

The authors stress that while their findings may seem alarming, the overall risk of cancer from an X-ray is low regardless of a person’s weight. They also add countless lives are saved by the scans detecting abnormalities in the body.

Study co-author Richard Welbourn, a consultant bariatric surgeon at Musgrove Park Hospital, said: ‘Patients should not be put off having the X-rays they need to investigate disease as they are often crucial in getting the right treatment.’

The study did not take into account other risk factors for cancer, such as smoking or a family history of the disease.

It also looked at patients who had weight-loss surgery and were therefore severely obese. It is unclear how at risk moderately obese people are of developing cancer as a result of X-rays.