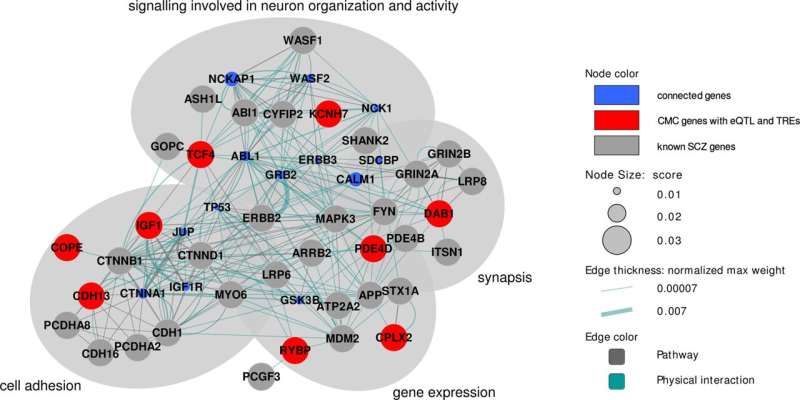 In our cells, the language of DNA is written, making each of us unique. A tandem repeat occurs in DNA when a pattern of one or more nucleotides—the basic structural unit of DNA coded in the base of chemicals cytosine (C), adenine (A), guanine (G) and thymine (T)—is repeated multiple times in tandem. An example might be: CAG CAG CAG, in which the pattern CAG is repeated three times.

Now, using state-of-the-art whole-genome sequencing and machine learning techniques, the UNC School of Medicine lab of Jin Szatkiewicz, Ph.D., associate professor of genetics, and colleagues conducted one of the first and the largest investigations of tandem repeats in schizophrenia, elucidating their contribution to the development of this devastating disease.

“We think this discovery opens doors for future functional studies on the precise biological mechanism of such variants,” said Szatkiewicz, who is also adjunct assistant professor of psychiatry. “Understanding the biological cause of schizophrenia will enable future development of diagnostic tests, effective pharmaceuticals, and personalized treatments.”

Tandem repeats usually don’t have negative health implications. However, based on the location of tandem repeats in the genome and how long they are, they can contribute to disease. For example, Huntington’s disease is caused by a tandem repeat in the HTT gene that has been abnormally expanded. Onset of the disease will happen once the sequence of cytosine-adenine-guanine (CAG) repeats more than 36 times on the HTT gene.

The longer repeat expansions lead to abnormal protein products with an extended track of glutamine that is toxic to brain cells. These repeats are inherited and tend to grow longer and longer in successive generations with increasing disease severity or decreasing age of onset.

In their current study, Szatkiewicz and her team looked at the entire genomes of 2,100 individuals to find tandem repeats that looked abnormally long and were unique or rare. Because all participants provided access to their medical records, the team was able to compare these long and rare repeat DNA sequence samples from people who had schizophrenia versus samples from people in the study who didn’t. This allowed the researchers to determine which of these tandem repeats may be involved with the development of schizophrenia.

The UNC School of Medicine researchers then collaborated with scientists from The Hospital for Sick Children in Toronto to see if this increased level of rare tandem variants would also be found in another independently collected group of samples. The Szatkiewicz findings were replicated in the Canadian investigation, indicating that this newly discovered link between tandem repeats and schizophrenia is quite strong.

“We think this is an important study,” said co-senior author Ryan Yuen, Ph.D., senior scientist at the Hospital for Sick Children and assistant professor of molecular genetics at the University of Toronto. “We’re confident our work sheds significant light on the role of tandem repeat DNA mutations play in the development of schizophrenia.”