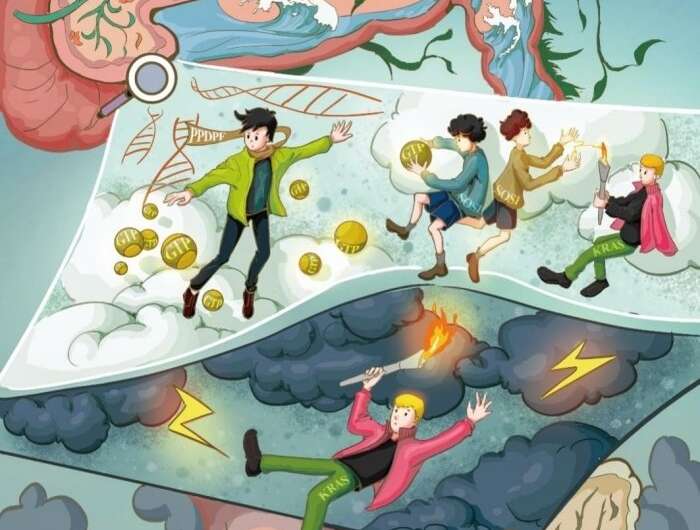 A recent study by Dr. Xie Dong’s group from Shanghai Institute of Nutrition and Health (SINH) revealed the important role of pancreatic progenitor cell differentiation and proliferation factor (PPDPF) in the development of pancreatic ductal adenocarcinoma (PDAC) and provided a potential therapeutic strategy for PDAC. This work was published online in Advanced Science.

PDAC is the sixth most common cause of death from cancer worldwide. The overall five-year survival rate for pancreatic cancer is less than 5%. KRAS mutations occur in up to 98% of PDAC. A RAS guanine nucleotide exchange factor (GEF), such as SOS1, is recruited to the plasma membrane and catalyzes the exchange of GDP for GTP on RAS to turn on the signaling upon EGFR activation. Previous research has reported that GEF could bind GTP. However, little is known about the significance of GTP-binding for GEF and whether SOS1 could bind GTP.

PPDPF was first reported in zebrafish. It is an exocrine cell regulator, which has potential PDZ, SH2, SH3 domain binding sites and a GTP binding site. The biological function of PPDPF in pancreatic cancer remains unknown.

In this study, the researchers revealed that the expression of PPDPF was increased in pancreatic cancer, and patients with high PPDPF expression have a worse prognosis. Knockout of PPDPF significantly inhibited tumor development in the mouse models of mutant KRAS-driven PDAC.

Additionally, the researchers revealed an unreported regulation of SOS1. They found that PPDPF interacted with SOS1, both of them could bind GTP, and PPDPF transferred GTP to SOS1. They also identified the Ser6,7 as the GTP-binding sites in PPDPF by mass spectrum. An integrated method was employed to analyze the most possible amino acids within SOS1 involved in the interaction with PPDPF, which were supposed to be the GTP-receiving sites. The importance of PPDPF-SOS1 interaction, and GTP transfer from PPDPF to SOS1 in KRAS activation was proved.

On the one hand, the GTP-binding defective mutants of PPDPF (S6L/7L) could not elevate the KRAS-GTP level, and almost lost the growth-promoting ability in vitro and in vivo. On the other hand, interaction between PPDPF and SOS1 mutants SOS1R1/SOS1R2 was significantly decreased. The GTP-binding activity, KRAS-GEF activity and tumor-promoting function of SOS1 were severely impaired when either of the two regions was destroyed. The two regions were in proximity to the KRAS-SOS1 binding site, but the mutations did not influence KRAS-SOS1 interaction.

This work reveals the novel function of PPDPF in PDAC, and provides a comprehensive understanding of SOS1, presenting a promising therapeutic target for malignancy.