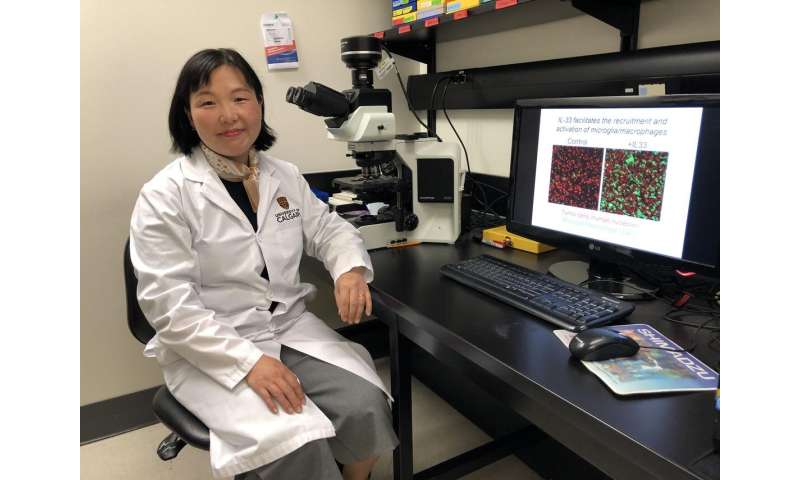 For some time, scientists have observed a tumor’s ability to recruit cells from the immune system. Until now, they did not understand how the tumor was able to do that.

“We discovered that glioblastoma cells secrete a specific factor, called interleukin 33,” says Stephen Robbins, Ph.D., co-principal investigator on the study, and professor at the CSM. “It’s this substance that draws immune cells to the tumor and helps to create an environment that changes the function of the immune cells. Instead of fighting the tumor, the immune cells go to work for it, contributing to the tumor’s rapid growth.”

Interleukin 33 (IL-33) is not new to researchers. It is referred to as an alarmin. Just like it sounds, alarmin raises an alarm in the body that signals the immune system. The research, conducted in mice, shows that when the tumor cells release IL-33 it signals the immune cells to the tumor. However, its job does not stop there, IL-33 also works in the nucleus of the tumor cell, which is critical, as it is this change that triggers the transformation in the immune cells. Altering their function from fighting tumor growth to promoting it.

Current treatment for glioblastoma includes surgery, radiation, and chemotherapy, which can be effective, but is not curative. This type of tumor is very resilient, however, the researchers found that there is a way to stop the tumor’s growth.

“We found that by stopping IL-33 from reaching the nucleus of the tumor cell, it crippled the entire process,” says Dr. Donna Senger, Ph.D., co-principal investigator on the study, and research associate professor at the CSM. “When we interrupt this step, the immune cells come into the tumor and can do the job they were meant to do. Attack the cancer.”

When the IL-33 process was disrupted, survival rates increased to over a year, from two months or less. While this study was in mice, glioblastomas in people behave similarly. The researchers say this discovery provides an additional strategy for the medical community to consider to contain and possibly destroy this fatal cancer.

“New findings like this one advances our fundamental understanding of how we can potentially re-program our immune system precisely to attack and destroy glioblastoma and other cancers,” says Dr. Victor Ling, Terry Fox Research Institute (TFRI) president and scientific director. “Our congratulations to this pan-Canadian team, led from the University of Calgary, for demonstrating how translational cancer research built on collaboration, and open and transparent data sharing, can have profound results.”