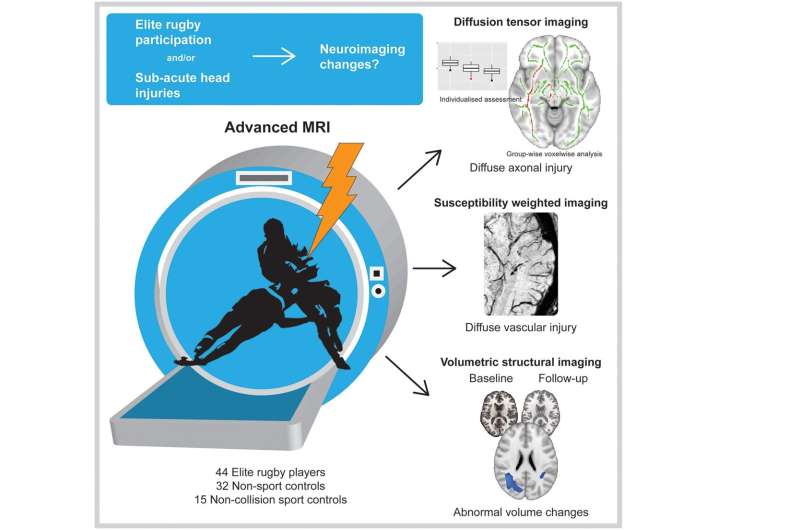 Participation in elite adult rugby may be associated with changes in brain structure.

This is the finding of a study of 44 elite rugby players, almost half of whom had recently sustained a mild head injury while playing.

The study, part of the Drake Rugby Biomarker Study, was led by Imperial College London and published in the journal Brain Communications.

The research found a significant proportion of the rugby players had signs of abnormalities to the white matter, in addition to abnormal changes in white matter volume over time.

White matter is the “wiring” of the brain, and helps brain cells communicate with each other. The research team say more work is now needed to investigate the long-term effects of professional rugby on brain health.

Professor David Sharp, senior author from Imperial’s Department of Brain Sciences, said: “Despite relatively high rates of head injury and an increasing focus on prevention, there has been relatively little research investigating the long-term effects of rugby participation. More objective measures of the effects of sporting head injuries on the brain are needed to assist with the assessment and management of individual players.

“Our research using advanced magnetic resonance imaging suggests that professional rugby participation can be associated with structural changes in the brain that may be missed using conventional brain scans. What is not clear at this stage is the long-term clinical impact of these changes. Further research is needed to understand the long-term implications of repeated head injuries experienced during a rugby career and to provide more accurate ways to assess risk for an individual.”

The work, in collaboration with University College London, was funded and instigated by The Drake Foundation, who brought together academia and sport for this pioneering study, and was additionally supported by the National Institute for Health Imperial Biomedical Research Centre, the UK Dementia Research Institute and the Rugby Football Union.

Lauren Pulling, The Drake Foundation’s CEO, said: “The Drake Foundation would like to thank the RFU, rugby clubs and research team for their support in this vital study. At present, the long-term consequences of these brain structure abnormalities are unknown and require further research. However, taken together with existing evidence across different sports, as well as recent cases of rugby players being diagnosed with brain diseases in their 40s, they are painting a concerning picture when it comes to players’ long-term brain health.”

The study, which took place between July 2017 and September 2019, assessed 41 male players, and three female.

All underwent a type of brain scan called an MRI, and around half then had a second MRI scan a year later. The study used two advanced types of MRI called susceptibility weighted imaging and diffusion tensor imaging. This allowed them to look at the structure of blood vessels and the white matter.

The study is the first to assess long-term changes in MRI images of professional rugby players.

The rugby players were compared to athletes in non-collision sports, as well as individuals who were not athletes.

Among the group of rugby players, 21 were assessed shortly after sustaining a mild head injury, called a mild traumatic brain injury.

In professional rugby union in England, these types of head injuries, which often cause concussions, are the most common reported match injury—accounting for one in five injuries.

The scientists analyzed the brain scans for changes in the white matter of the brain, and compared these to the athletes in non-collision sports, and the non-athletes.

The results revealed that 23 percent of all of the rugby players showed abnormalities to their cell axons (the ‘wires’ of brain cells), or small tears in blood vessels. These tears cause small leaks in the brain, called microbleeds.

These changes were seen in both players with and without a recent head injury.

In addition, the scans provide evidence for unexpected changes in white matter volume across the whole group of rugby players. These could indicate a longer-term effect of these abnormalities to connections in the brain. However, further research is needed to understand the significance of these changes in brain structure.

The study team add that long-term studies are needed to investigate the long-term effects on brain health. They add that other health benefits of sports participation must also be taken into account when assessing impact on the brain health.

Mr Karl Zimmerman, lead author of the research, from Imperial’s Department of Brain Sciences, said: “The implications on an individual level of the brain changes associated with elite rugby participation are unclear, although obviously it is concerning to see these changes in some of the players’ brains. It is important to note that our results in adult professional rugby union and league players are not directly comparable to those who play at local or youth levels. The overall health benefit of participating in sports and physical exercise have been well established including the reduction in mortality and chronic diseases such as dementia. Long-term studies are now needed of both active and retired rugby players to investigate the effect of participation on long-term brain health.”

Dr. Simon Kemp, Medical Services Director at the Rugby Football Union (RFU) added: “The RFU is fully committed to advancing our understanding of the short, medium and long term consequences of head impacts and concussions so that we can ensure we can make continued improvements in player welfare. We welcome any research that helps to advance our knowledge which is why we actively collaborated with the academic institutions on the Drake Foundation Rugby Biomarker Study from its inception, particularly to promote the recruitment of players.

While it is unclear from that research what the individual long-term implications are regarding the brain changes seen in these advanced imaging techniques, it is clearly a priority to investigate this further. To further develop our understanding the RFU, in partnership with Premiership Rugby and independent experts, will be providing a specialist clinical service for the assessment and management of retired elite male and female rugby players between the ages of 30-55 to individually assess their brain health.

An integrated research program will review the risk, causes, assessment and management of brain problems for those who have participated in elite rugby.”

The study was carried out in collaboration with UCL researchers Dr. Etienne Laverse and Professor Huw Morris from the Department of Clinical and Movement Neuroscience, UCL Queen Square Institute of Neurology.

Professor Huw Morris said: “We have more to learn about the mechanisms and consequences of head injury, and the best approaches to player assessment. This Imperial/UCL collaborative study has brought together expertise from brain sciences across London.

The Drake Foundation have pioneered work in this field in the UK and we are very grateful for the support of the foundation, players, medical teams, clubs and the RFU in carrying out this work. We hope that this work, and understanding the long-term implications will ultimately improve safety across contact sports.”