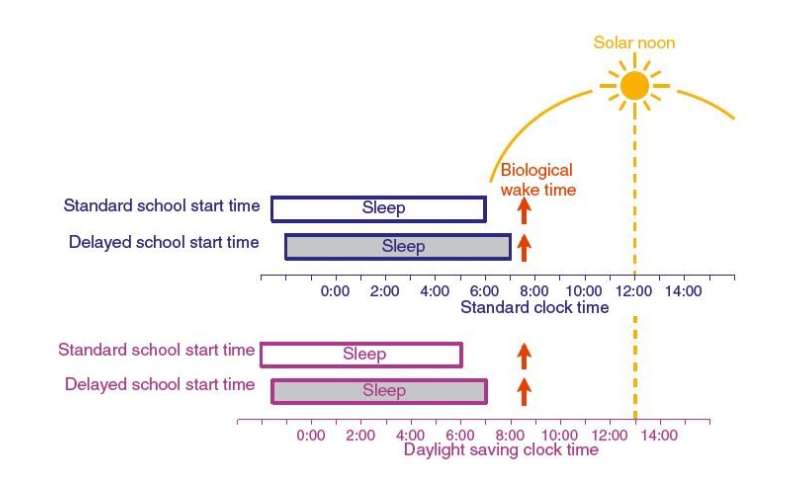 Moving the clock forward and then back each spring and fall usually draws plenty of complaints and questions about why such a change is necessary. As a result, several states in the U.S., including California, Washington, Florida, and North Carolina, are now considering doing away with the practice by making daylight savings time (DST) permanent.

But, researchers reporting in the journal Current Biology on April 22 say, permanent DST would make it harder to wake up in the winter, as it would remain dark an hour later into the morning. It would also undermine efforts in many states to give teens more time to sleep in by pushing school start times back.

“There has been a long-term, very active debate in the USA and other countries on the difficulties teenagers have in getting up for school,” said Anne Skeldon, Professor of Mathematics at the University of Surrey, UK. “Similar discussions on school start times and on permanent daylight saving/standard time are happening in Europe. It seemed important to us to point out that moving to permanent daylight saving will undermine any benefits on sleep timing of shifting school start time later.”

Two bills currently making their way through the Californian state legislature are a case in point. Senate Bill SB-328 Pupil Attendance: School Start Time would prohibit middle and high schools from starting earlier than 8:30 in the morning. Senate Bill AB-807 Daylight Saving Time would result in a switch to permanent DST.

Thinking through why permanent DST would negate changes in school start times is a bit tricky, Skeldon explained. That’s because it requires understanding how three different times are related to each other and how they shift over the course of the year: environmental time as determined by the sun, our internal biological time (linked to actual light exposure, including sunlight), and the time that we set on our clocks.

If the clocks weren’t turned back in the fall, as under permanent DST, it would mean that sunrise would come at an even later clock time than it already does during those shorter days of the winter. As a result, Skeldon and co-author Derk-Jan Dijk, Professor of Sleep and Physiology and Director of the Surrey Sleep Research Centre, write, “a required wake time of 7 a.m. during DST leads to the same degree of misalignment [between the socially required wake time and biological wake time] as a required wake time of 6 a.m. during ST. With permanent DST, schools would need to delay start times by one hour during the winter months just to maintain the status quo!”

Of course, they continued, it’s possible that people living indoors under electrical lighting aren’t affected that much by shifts in sunrise. But, if that’s true, they point out, then it really doesn’t matter what time school starts in the first place.

“If we are not entrained to solar time, switching to DST will have no impact on adolescent sleep, but Bill SB-328 delaying school start times is pointless,” they write. On the other hand, “if we are completely or partially entrained to solar time, Bill AB-807 leading to permanent DST is bad for adolescent sleep (and the sleep of others) and negates the effect of later school start times.”