Office worker, 69, who ate fish every day of his two-week Alaskan cruise becomes confused and forgetful after developing mercury poisoning

A 69-year-old man became confused, forgetful and acted ‘strangely’ after eating too much fish on an Alaskan cruise.

The man – who has not been named – was taken to the Florida Hospital Heartland Medical Center by his wife after they returned from their two-week holiday.

Doctors initially thought his ‘altered mental status’ was due to a stroke or too much alcohol, however, tests came back clear.

The office-worker’s wife then mentioned he had eaten fish at almost every meal of their holiday, including high-mercury halibut, lingcod and salmon shark.

He was diagnosed with ‘organic mercury toxicity due to consumption of excessive fish’ after a test revealed he had 35ng/mL of the metal in his blood – with normal levels being less than 10ng/mL.

After four days in hospital, the man’s symptoms disappeared, with his mercury level being a healthy 9.2ng/mL a month later. 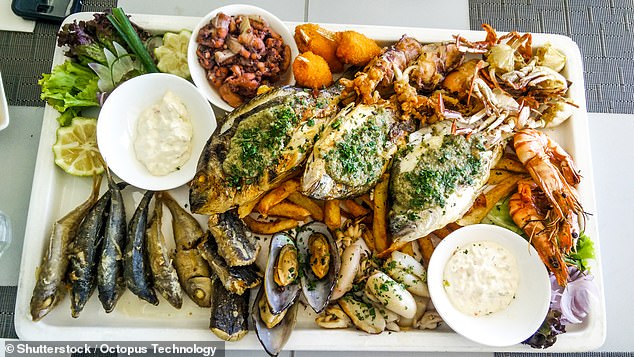 The incident was written in a BMJ Case Report by Dr Rupam Ruchi, from the department of medicine and nephrology, who treated the patient.

The man – who is obese, and suffers from both diabetes and high blood pressure –  had never eaten so much fish in such a short space of time before.

His desk job also means he is not exposed to environmental mercury, unlike those who work in wood preservation or outdoor painting.

Due to no effective treatment being available, the man was monitored in hospital and told not to eat anymore high-mercury fish.

WHAT IS MERCURY POISONING?

Mercury naturally builds up in fish, shellfish and animals that eat fish.

Higher levels are found in fish at the top of the food chain, including marlin, shark and swordfish.

Other sources can be dental fillings.

Too much mercury exposure can damage the brain, heart, kidneys, lungs and immune system.

If the metal is in the bloodstream of unborn babies or young children, it man harm their nervous system, making them less able to think and learn.

Symptoms of mercury posioning can include:

A healthy person’s mercury level should be less than 10ng/mL.

A single serving of halibut, lingcod or salmon shark can exceed that, according to the Alaskan Government.

To prevent mercury poisoning, the Alaskan Government gives points per portion of different fishes and does not recommend exceeding 12 points a week.

For example, a single 6oz (170g) serving of halibut, lingcod or salmon shark has between 18 and 30 points.

The authors said: ‘The concentration of mercury is very low in most food (<0.02 mg/kg).

‘However, certain types of marine fish (such as tuna, swordfish and shark) and certain fish taken from polluted fresh waters (such as walleye, bass and pike) may contain high concentrations of mercury.’

The Natural Resources Defence Council states that fish with a mercury level of 0.3–to-0.49mg/kg can be safely eaten three times a month.

But fish with more than 0.5mg/kg of mercury should be avoided.

The Environmental Protection Agency recommends a maximum daily exposure of 0.1mcg/kg, which typically results in a blood-mercury concentration of less than 6mcg/L.

Too much mercury usually causes gastro and respiratory symptoms initially, followed by ‘pins and needles’ around the mouth, low energy, deafness and poor balance.

Foetuses are particularly vulnerable, with the NHS advising pregnant women not to eat any shark, marlin or swordfish.