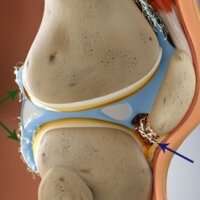 A new collaborative study led by The University of Western Australia has found that a painful joint condition called arthrofibrosis that can result from traumatic injury or surgery may come in two forms which should be treated separately.

“This condition, which is known as arthrofibrosis, restricts motion and can destroy careers and cause significant suffering and disability,” Dr. Usher said.

“For the first time, we propose that arthrofibrosis may come in two forms – active and residual – and the best treatment option may be different depending on which form it is.”

Dr. Usher said although arthrofibrosis was a common disease that affected between five and 15 per cent of people who had suffered joint trauma, awareness of the condition remained poor, even among medical and sporting professionals.

“ACL injuries appear to be particularly prone and it appears that over-aggressive exercise during rehabilitation can cause or even worsen arthrofibrosis, making it a permanent condition.”

Dr. Usher said there was an urgent need for biomarkers to identify those at risk of developing arthrofibrosis, as well as new drugs to treat the condition.