Engulfed by a wall of orange – only briefly broken by a glimpse of blue from a piece of equipment thrown from my vehicle – I sat briefly in the silence trying to fully understand what had just happened.

This was quickly replaced with the intense pain in my feet and the hoarse breath from my driver as he struggled to breathe from his injuries.

My vehicle had detonated an improvised explosive device (IED) as we extracted from the Arghandab River Valley in Southern Helmand Provence, Afghanistan.

This incident happened in December 2012 when I was serving in the Duke of Lancaster’s Regiment as part of the Brigade Reconnaissance Force (BRF). It was my third operational tour in less than six years.

The blast severely wounded my driver and shattered both of my feet. It was the bravery of my Afghan interpreter – who was unhurt in the blast – and the soldiers who I served with that saved my driver’s life.

Their quick response and disregard for their own safety while clearing the immediate area allowed them to stabilise and provide lifesaving first aid to my driver, who had extensive internal bleeding and difficulty breathing.

After the accident, we were evacuated back to the safety of Camp Bastion and then the UK within 24 hours. It was there that my driver had to have his lower leg amputated due to the extent of his injuries.

Little did I know I’d have the same fate less than two years later. 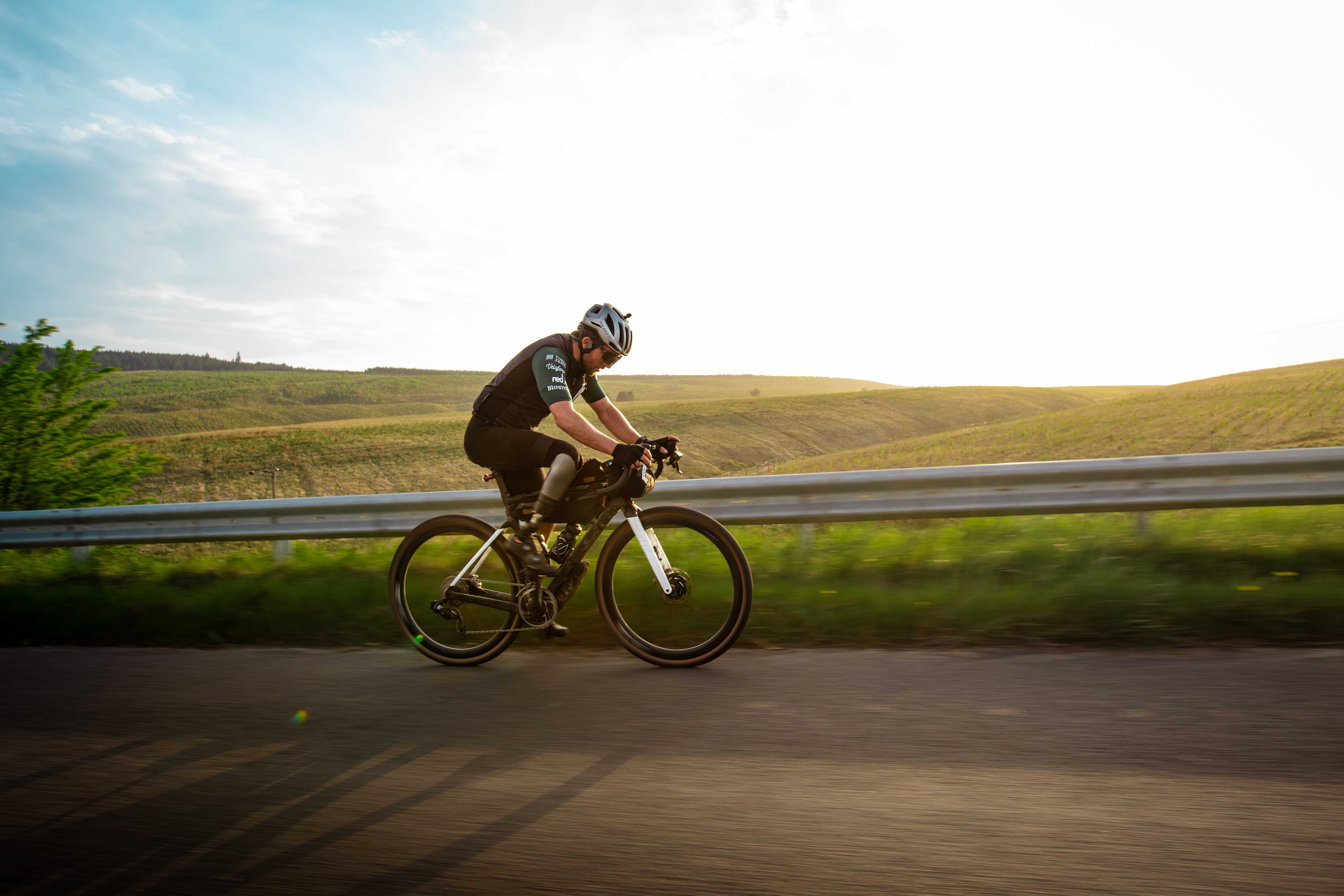 Thankfully, my injuries were life-changing, but not life-threatening. I had to wait for the swelling to reduce and then have reconstructive surgery a few weeks after the blast to wire the pieces of bone in my heel back together. The ends of the wires protruded externally and were removed by the surgeon, casually armed with a pair of pliers a couple of months after.

I was unable to walk, I had no independence and I felt like I had been stripped of any purpose I had from the job I loved as a soldier.

The next six months were tough living with so many unknowns. Would I still have a career in the Army? Would I walk or run again?

At this point, I had to focus on what I could control and not the uncertainties. My rehabilitation became my new focus; making sure I gave my body and mind the best chance of recovering from the unknowns ahead.

I spent the first nine months in a wheelchair – it really opened up my eyes to the difficulties of living life with a disability. I was fortunate to have an experienced team of consultants around me, but every day felt like a physical and mental rollercoaster.

I had to gradually build up the strength in my feet before I could start to walk on crutches. Building the endurance to just stand without feeling that the floor was pushing through my feet took months of painfully-hard work.

While I was still in rehabilitation – 19 months since the incident – I always looked to challenge myself and had a fantastic opportunity to experience the challenges of crewing a 45 foot racing yacht at Cowes week.

During the second day of racing, my luck once again ran dry when I lost a fight with the sheet line from the jib sail after it trapped my leg against the spinnaker pole. The increasing pressure of the sail filling with wind during the tack snapped my tibia and fibula in half.

In the days that followed, I experienced the onset of compartment syndrome – a painful and serious condition caused by increasing pressure within the muscle compartment, restricting blood flow to the area that damages both muscles and nerves. This killed the muscle and nerves in my lower leg, leading to six weeks of nine surgeries to try and save my leg.

After these operations, I – with the advice from doctors – decided to make the decision to amputate my leg below the knee.

It was a decision that I hadn’t taken lightly but it gave me the only option to have the chance of an active lifestyle I hadn’t seen for a long time.

I’d become accustomed to the routine of surgery – the same faces as I lay on the operating table waiting to be put to sleep. It gave me a sense of reassurance and trust that it would all be OK.

I actually felt a sense of relief waking up from the surgery because the past 22 months had been full of pain and discomfort leading to a dislike for my right foot.

With the continued support and expertise from the Ministry of Defence’s rehabilitation facility at Headley Court, I knew I had the perfect opportunity to lay the foundations of my new life ahead of me.

With my previous focus on rehabilitation and conditioning prior to the amputation, I started to walk on a prosthetic leg a month post-operation. It certainly wasn’t easy, as I was battling with swelling, wounds opening on the stump, heightened sensitivity and bruising.

I’d constantly be fighting with my drive to be independent and the stark realities of what it would be like as an amputee, as well as the need to look after my body.

I’d always cycled as part of my own general fitness when in the military but never really took it too seriously. After being injured, I needed to find something that was low impact and would get me out of the house.

Cycling is hugely inclusive, with the different bikes and equipment available, you just need the will to give it a go and find what works best for you. Thankfully, I don’t need any special adaptations to my bike – as the prosthetic leg I use and the hard work put in to overcome the issues of not having an ankle and calf muscle allows me to clip in and ride normally.

The freedom, the sense of achievement – even if you’ve fallen off 10 times before – made me want to keep going back and enjoy the opportunities and challenges that were out there.

After mastering this skill, I decided to take on the challenge of riding a 2,000km gravel route from Land’s End to John O’Groats – which is one end of the UK to the other – earlier this year. The cycle would see me take on road, gravel and singletrack trails through England, Wales and Scotland.

By taking on this challenge, I also wanted to help raise money for Blesma – a charity that supports serving and ex-service people who have suffered life-changing limb loss or the use of a limb. After my amputation, the charity was there to support me and my family through a huge change in my life and will continue to be there throughout future challenges in my life as an amputee.

Nerves were a welcome feeling to join me at the start line on 9 May. Without nerves are we really challenging ourselves?

My training and preparation gave me the belief and confidence that I could successfully manage the unknowns and challenges that I’d certainly face.

Day one through Cornwall went exactly to plan, as I covered 160 miles to Exmoor. Unfortunately, day two didn’t follow the same trend, with punishing off-road sections in Exmoor and routes over the Quantock and Mendip hills to Bristol, which was topped off with a very wet morning into Wales.

Thankfully, the opportunity to cycle through the British Army Sennybridge training area was an unexpected boost to my morale, as I was able to enjoy some nostalgic memories of my time training in the Army. This is where I certainly set the foundations for the physical and mental resilience, I’d need to rely on in the days ahead.

Looking back, I’m not sure I’d be able to single out one section as the hardest or most enjoyable throughout the 2,000km route. The route was endlessly surprising and tested me a lot, while also taking me to some of the best cycling and stunning UK scenery.

After continually enduring 12 to 18 hours of cycling a day – over varying and technical terrain with plenty of bike-pushing due to unrideable sections – I rolled into John O’Groats after 10 days and nine hours.

It was a feeling of relief and huge pride to have finished what this route threw at me and to have been able to ride it on continuous days as an amputee with the difficulties that also brings.

Being able to share the joys of the finish line with both the support crew that had been there for me day and night, as well as my wife, Lizzie, who’d taken on the daunting drive from start to finish with our 15-month-old daughter.

Not only was the personal achievement hugely rewarding, but knowing that we’d been able to raise a total of £6,500 for Blesma – with donations still coming in.

The money raised is hugely important to help other veterans benefit from the support through the challenging times of living life with limb loss.

I also hope that the challenge helps inspire others, showing that people shouldn’t be defined by disability and that we should look to thrive from the challenges ahead.

If you want to donate to Stuart’s fundraising efforts, follow the prompts on his Just Giving page here.

In this exciting new series from Metro.co.uk, What It Feels Like… not only shares one person’s moving story, but also the details and emotions entwined within it, to allow readers a true insight into their life changing experience.