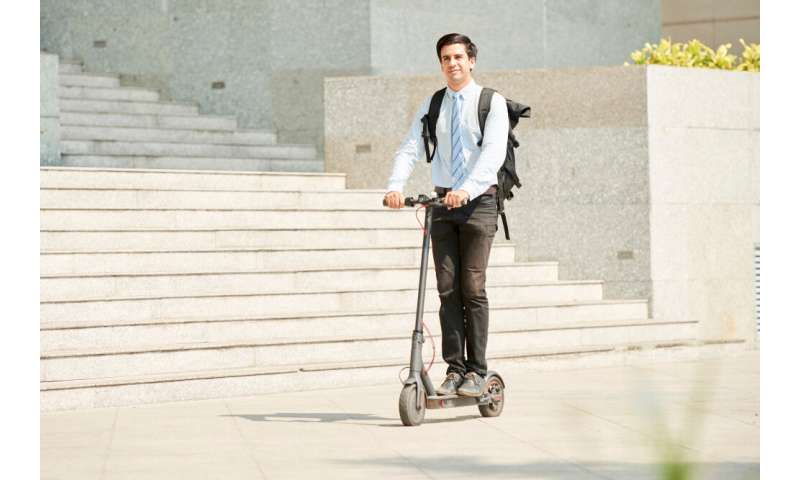 Facial and head injuries from riding electric scooters have tripled over the past decade, according to a Rutgers study.

Electric scooter use has been increasing in popularity as a more environmentally friendly and efficient alternative to gas vehicles. However, state helmet laws vary, and the study found that many people are being injured from not wearing appropriate protective equipment.

The study, published in the American Journal of Otolaryngology, analyzed records in the Consumer Product Safety Commission’s National Electronic Injury Surveillance system between 2008 and 2017 to determine the types and frequency of head and facial injuries resulting from motorized scooters. The system collates data from about 100 participating hospitals, which is then extrapolated to provide national estimates on injuries related to consumer products.

The researchers found that over the decade studied, emergency departments recorded 990 head or facial injuries sustained from electric scooter use—or 32,000 estimated injuries nationwide. The incidences tripled annually from an estimated 2,325 nationwide in 2008 to an estimated 6,947 in 2017.

Most of the people injured were men between 19 and 65; 33 percent were children between 6 and 12. “Children use motorized scooters marketed as toys, but in reality, certain models can reach speeds of almost 30 miles per hour,” said co-author Amishav Bresler, a resident at Rutgers New Jersey Medical School.

Closed head injuries, such as concussion and bleeding or bruising of the brain, were most frequent, followed by facial cuts or abrasions. The study showed about 5 percent of the injuries were fractures, most frequently in the skull or nose.

In records where helmet use was recorded, 66 percent of those injured were not wearing helmets. The study also found that helmet use increased with age, from about 19 percent in toddlers to about 67 percent in senior riders.

Bresler noted a significant variation in state laws regarding motorized scooters. For example, the District of Columbia classified motorized scooters as “personal mobility devices” that are not subject to inspection or helmet laws while a new law in New Jersey regulates electric scooters in the same way as a traditional bicycles, requiring helmets in only those under 17.