New mother, 28, is battling an aggressive form of cancer after nurses mistakenly told her a lump in her breast was built-up milk after she gave birth

A mother is battling an aggressive form of breast cancer after finding a lump that was believed to be built-up milk from not breastfeeding.

Vicki Keating, 28, of Birmingham, discovered the lump a few weeks after the birth of her daughter, Rey Flower, now eight months.

She assumed the lump was due to a blocked milk duct – something nurses initially agreed with after an ultrasound.

Ms Keating had more tests done just in case, and they revealed she had triple negative breast cancer in November 2018.

The catering assistant, who will have a double mastectomy next month, is sharing her story to warn other young women to check their breasts. 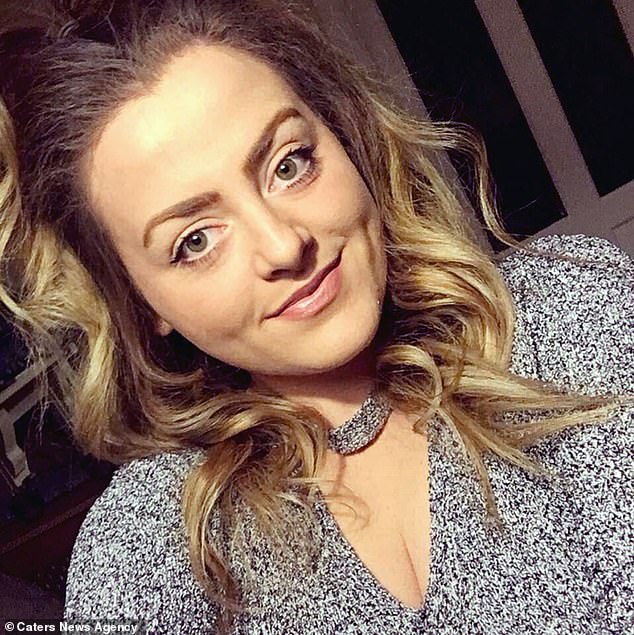 Vicky Keating is battling an aggressive form of breast cancer after finding a lump that was believed to be built-up milk from not breastfeeding. Pictured before she was diagnosed 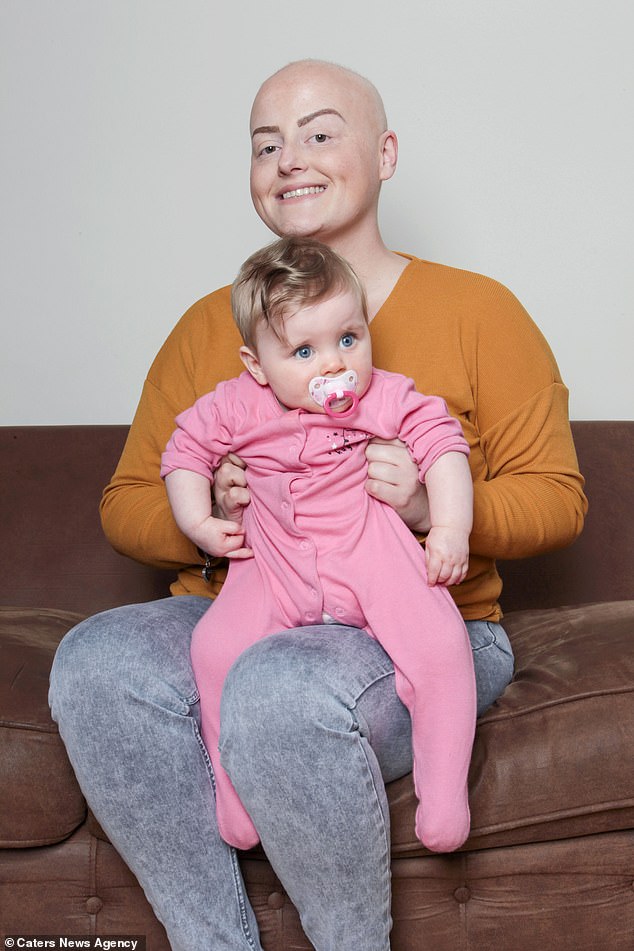 The mother-of-two, 28, assumed the lump was due to a blocked milk duct – something nurses initially agreed with before more tests were done

Ms Keating, who lives with her partner, Gavin Flower, 27, said: ‘I wasn’t too worried when I first felt a lump in my breast shortly after the birth of my daughter, Rey.

‘I assumed it was linked to my recent pregnancy and the doctor agreed it was most likely to be a blocked milk duct.’

A lump in the breast or a red, swollen area that is painful is a symptom of a condition called mastitis in breastfeeding women where the milk is built up.

In non-breastfeeding women, mastitis most often occurs when the breast becomes infected as a result of damage to the nipple, according to the NHS.

Ms Keating said: ‘Even after I was referred for an ultrasound and the lump was discovered by nurses, they assumed the fluid inside was actually just milk.

‘But thankfully they didn’t stop their tests there and the lump had a biopsy taken from it.’

Three weeks later, Ms Keating received a letter which asked her to return to hospital for results. 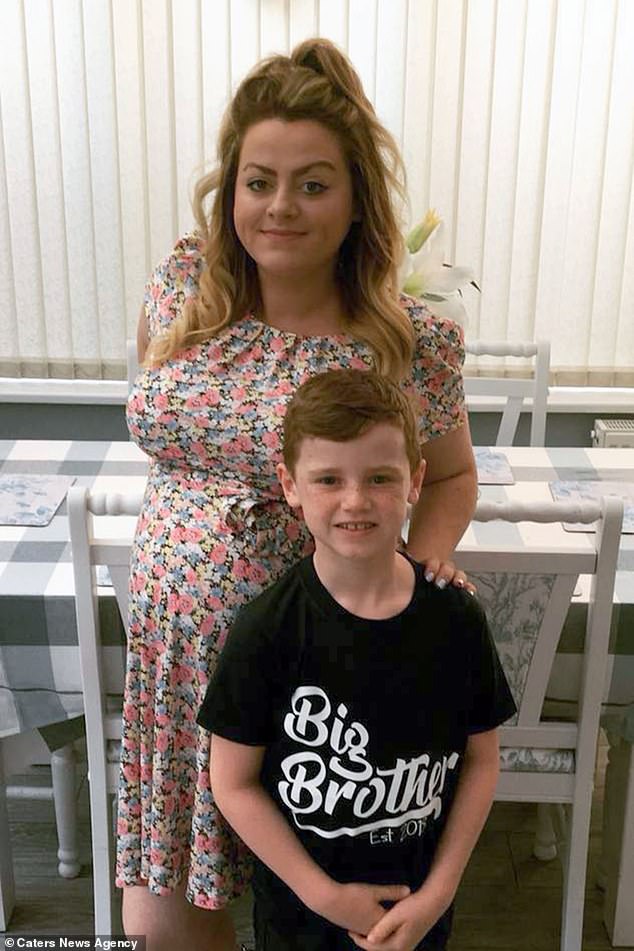 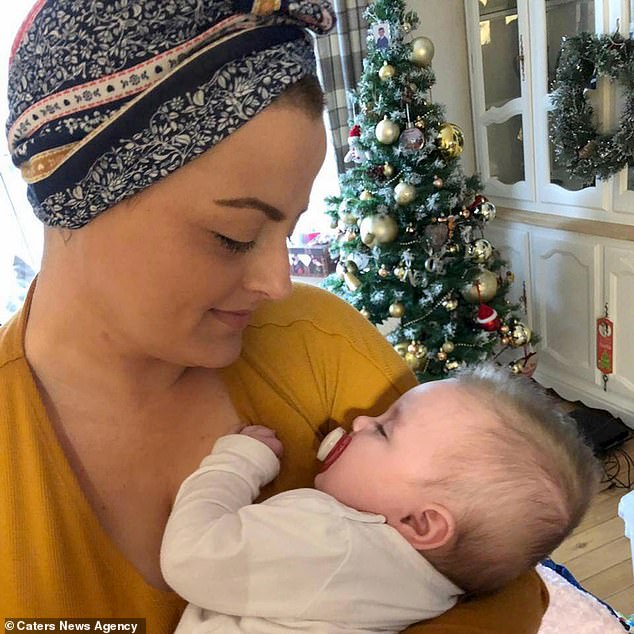 Ms Keating first found the lump a few weeks after the birth of her daughter, Rey, now eight months old. Pictured, before the diagnosis 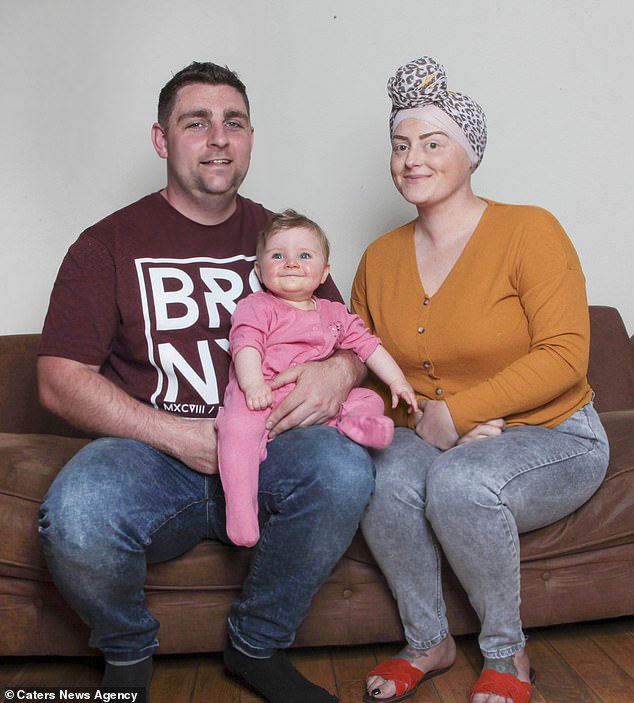 Ms Keating is due to have a double mastectomy next months to ensure her cancer doesn’t return. Pictured with Rey and her partner, Gavin Flower, 27

She said: ‘I went along on my own as I assumed the lump was benign.

‘I never imagined I’d be diagnosed with cancer at such a young age.’

Ms Keating started having chemotherapy just before Christmas and has completed her final round today [April 5].

She said: ‘Thankfully doctors don’t think it has spread but they won’t know until I have surgery.’

Ms Keating has decided she wants to undergo a double mastectomy next month to ensure her triple negative cancer doesn’t return.

She added: ‘The type of cancer I have doesn’t respond to any type of hormonal treatment so after chemotherapy and surgery there’s no other options for me.’ 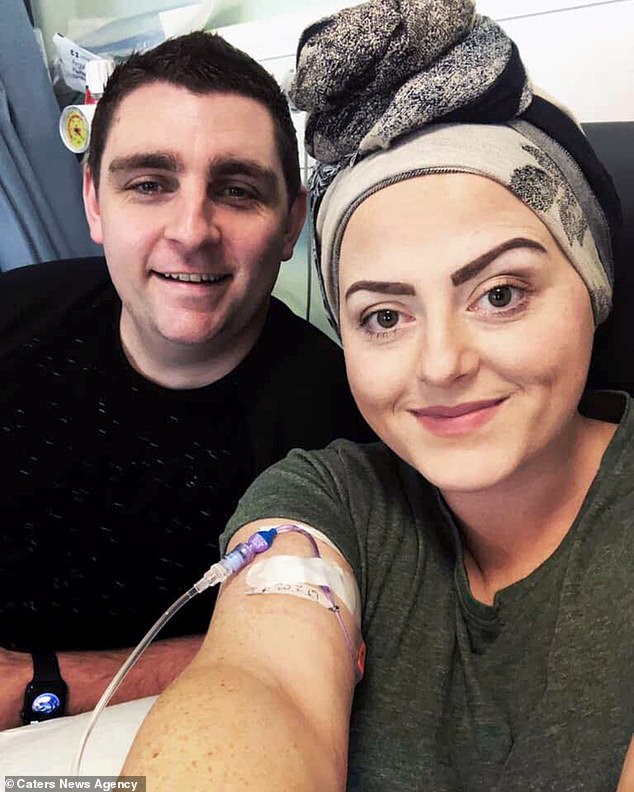 Ms Keating returned to the hospital for results three weeks after tests – she went alone because she didn’t think she could have cancer so young. Pictured, in hospital while having treatment with Mr Flower 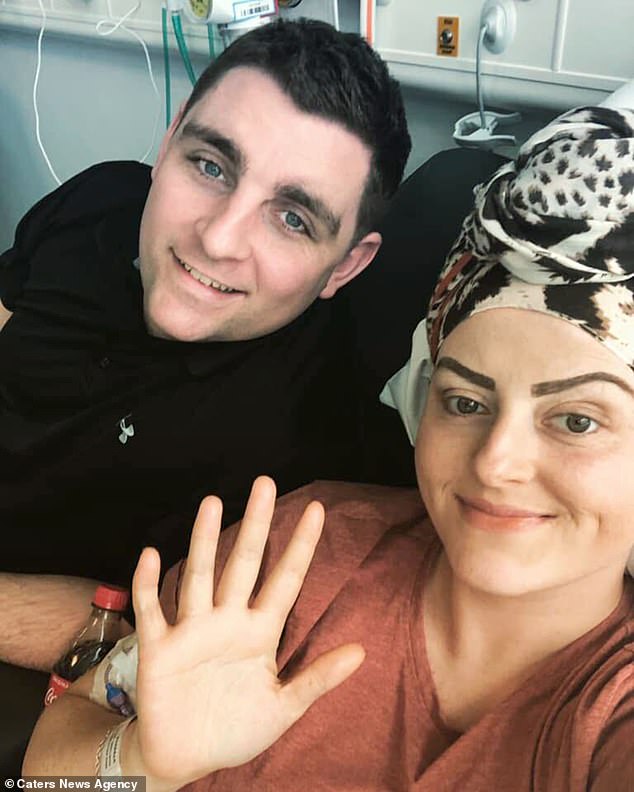 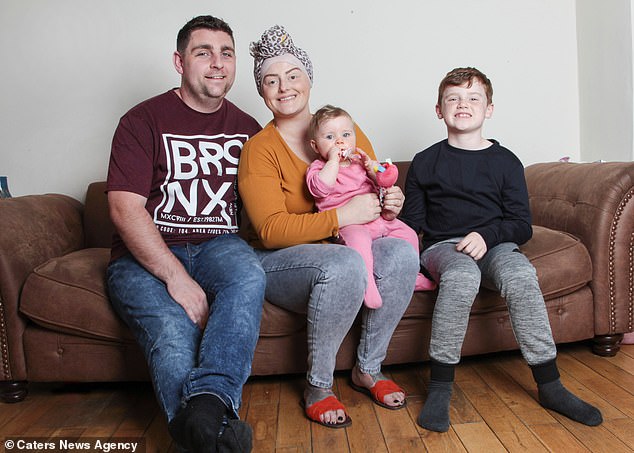 Ms Keating said she didn’t have fertility treatment before chemotherapy because she already has two children with her partner, pictured together at home

The growth of triple negative cancer is not fueled by the hormones estrogen and progesterone, or by the HER2 protein. Therefore treatment using hormone therapy and HER2 targeted therapies have no benefit.

Ms Keating said: ‘Doctors haven’t advised a double mastectomy but I know there’s a chance I could get cancer again in my other breast.

‘I don’t want to take that risk and want them both removed at the same time.

‘I will then undergo surgery at a later date to have them both reconstructed.

‘I was asked if I wanted fertility treatment before my chemotherapy but as I already have two children I decided against it.

‘I have to make a full recovery for my kids, Rey and Grayson Rainbow, 11.’

Ms Keating – who has lost her hair due to chemotherapy – started a blog, The Tales of The Triple Negative Boobie, to document her experiences with cancer at a young age to help others. 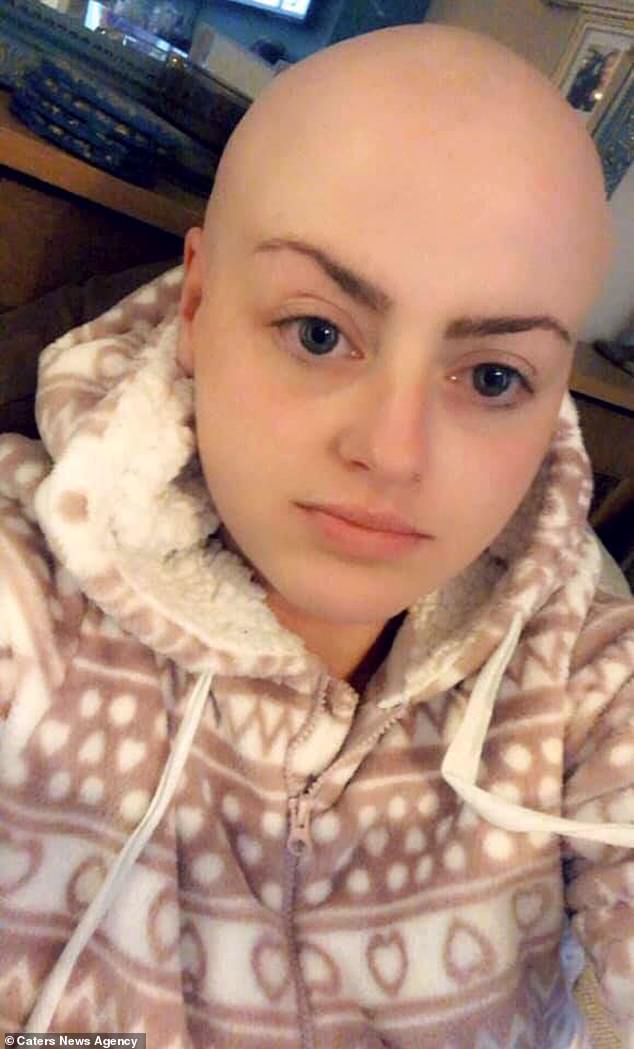 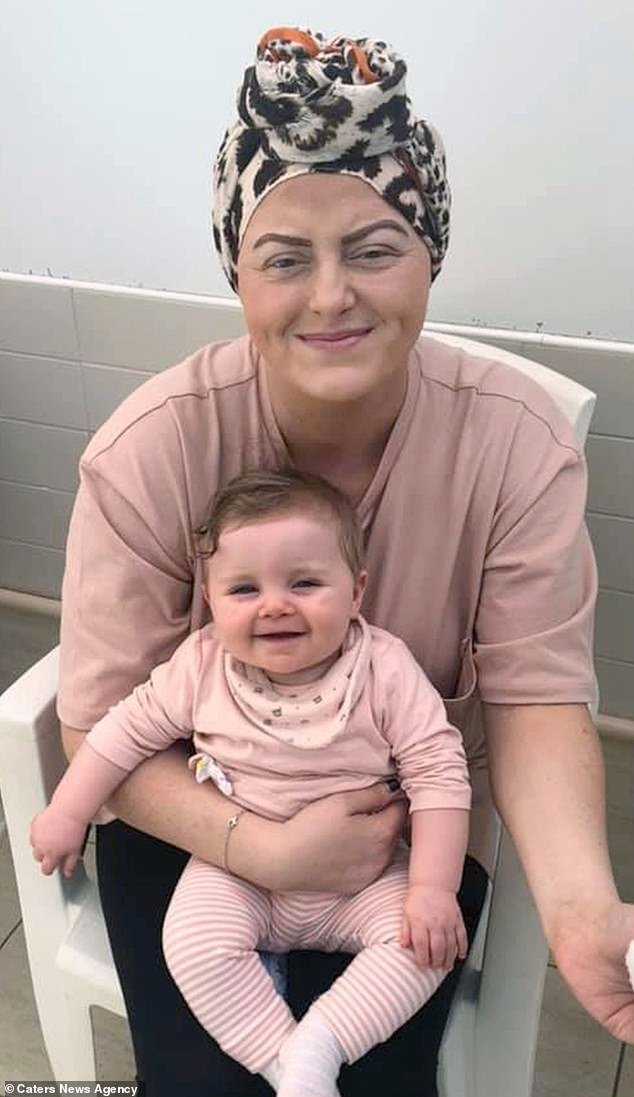 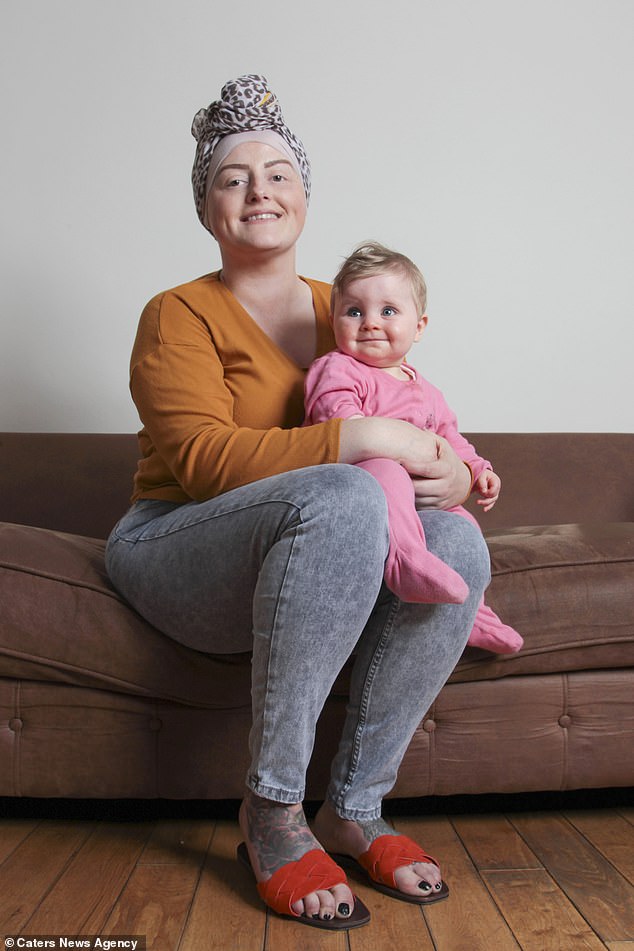 Ms Keating said: ‘I want everyone to know that breast cancer does occur in your 20s’

She said: ‘I’ve been lucky to have a supportive partner and family but I wanted to start my blog to help raise awareness.

‘It 100 per cent can happen to anyone. I’ve known from the day I was diagnosed that I didn’t want to be quiet about it.

‘I want everyone to know that breast cancer does occur in your 20s.

‘Young women need to be aware that they need to check their breasts for lumps and regardless of whether you think it’s related to your pregnancy or not, push for further tests.’

HOW TO CHECK YOUR BREASTS

What to look out for

This is why it is so important to feel AND look at you r boobs. Dimpling and puckering of the skin can look similar to orange peel

It is important to check not just your boob but your upper chest and armpit too, as these areas also contain breast tissue

This is liquid that comes from the nipple without squeezing it

Most women may naturally have one boob bigger than the other or experience their boobs gradually changing as they get older.

Many changes are perfectly normal, however if you notice a sudden, unusual change in size or shape then get it checked out

All this means is your nipple has become pulled into the boob or looks different to usual. This could be a change in its position or shape. That’s why it is important to pay special attention to your nipple during your regular checks

There are many reasons why your skin could become irritated, especially if you are breast feeding, but if you notice any redness or a rash on the skin and/or around the nipple or any crusting of the nipple, make sure you get it checked out by your doctor

What to feel for

Some boobs are naturally lumpy and this can be perfectly normal. The key is to get to know how your boobs feel, so you would notice if any new lumps appear or if your boob starts to feel thicker in one area compared to the rest

Some breast pain can be perfectly normal, especially around your period. But keep an eye out for any unexplained pain in your breast or your armpit that’s there all or almost all of the time