Exposure to pesticides by the age of one could increase the risk of being diagnosed with autism, a new study claims.

Researchers found that children who were exposed before being born and during their first year of life had about a nearly 10 percent higher risk of developing autism spectrum disorder (ASD).

And the risk of an ASD diagnosis with an intellectual disability – trouble with conceptual skills, social skills and practical skills – was as high as 50 percent.

The team, from the University of California Los Angeles Fielding School of Public Health, is now calling on public health policymakers to implement changes that would reduce a pregnant woman’s exposure to pesticides down to zero.

However, experts question the controversial findings and say that previous studies have shown ASD is largely genetic and that a small fraction of cases are due to environmental factors. 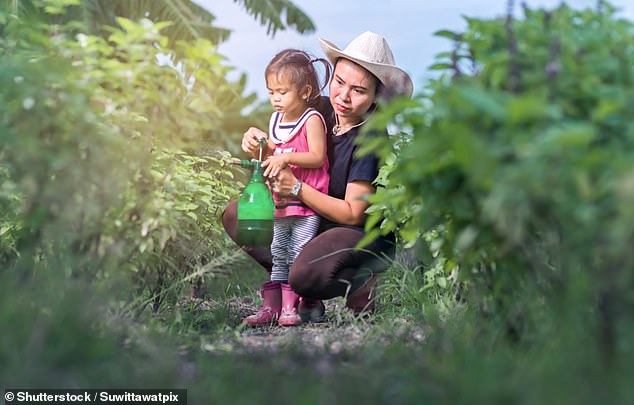 Previous studies have linked pesticide exposure to abnormal brain development, but few have studied how it affects ASD risk.

Autism spectrum disorder is a developmental disorder in which sufferers have a hard time communicating and with behavior.

It encompasses several conditions – including autism, Asperger’s syndrome and childhood disintegrative disorder – and symptoms can range from mild to severe.

Children are usually diagnosed by age two after they exhibit signs such as reduced eye contact, not responding to their name and performing repetitive movements.

According to the Centers for Disease Control and Prevention, about one in 59 children has ASD.

For the study, published in The British Medical Journal, the team looked at nearly 3,000 patients diagnosed with ASD, 445 of whom also had an intellectual disability.

To compare, they included more than 35,000 patients who were not diagnosed with ASD.

The participants were born between 1998 and 2010 in the California Central Valley, an agricultural area. About 80 percent of the children were boys.

Using data from the state’s Pesticide Use Registry, researchers analyzed exposure the patients would have had before they were born and during their infancy to 11 common pesticides.

One of the studied weedkillers, glyphosate, has been at the forefront of the news in recent months due to trials surroundings its potential ability to cause cancer.

And, just yesterday, a San Francisco jury found Roundup to be a ‘significant factor’ in Edwin Hardeman being diagnosed with the same disease.

The team discovered that babies exposed to pesticides had a slightly increased risk of being diagnosed with ASD – about eight percent – compared to controls.

However, the odds of an ASD diagnosis along with an intellectual disability – the most severe of cases – was a shockingly high 50 percent.

‘ASD is largely genetic as demonstrated by family and twin studies,’ said Dr David Menassa, a research fellow at the University of Southampton in the UK.

‘A small percentage of cases may have an environmental aetiology and this is what this current case-control study attempts to address.

“Case control studies only give us odds ratios that have no relationship to risk. There is no causation here, only a weak association.’

The authors say further studies are needed, but believer their research comes on the heels of past work in the field.

‘Our findings suggest that ASD risk may increase with prenatal and infant exposure to several common ambient pesticides that impacted neurodevelopment in experimental studies,’ they wrote.

In an accompanying editorial, Dr Amanda Bakian and Dr James VanDerSlice, professors in the division of public health at the University of Utah, said they agree with the authors that limiting pesticide exposure during pregnancy is important.

‘Yet, reducing maternal exposure to zero for [pesticides] might be close to impossible in some populations,’ they write.

The associate professors add that further studies, which confirm the findings of this one, may help policymakers enact change that will reduce the risk of pregnant women living in areas with high pesticide use.