Less than 10 minutes of brisk walking a day could prevent disability in later life, study finds

Less than 10 minutes of brisk walking a day could prevent disability in older adults, a new study finds.

Researchers say a little bit of fast-paced activity each day for those with osteoarthritis reduced the risk of not being able to safely cross the street by 85 percent.

It also slashed the risk of daily living disability, such as having trouble walking across a room or getting dressed, by nearly 50 percent.

The team, from Northwestern Medicine in Chicago, Illinois, hopes the findings can help healthcare providers make exercise suggestions to patients and encourage policymakers to recommend an intermediate goal for those who are hesitant to become physically active. 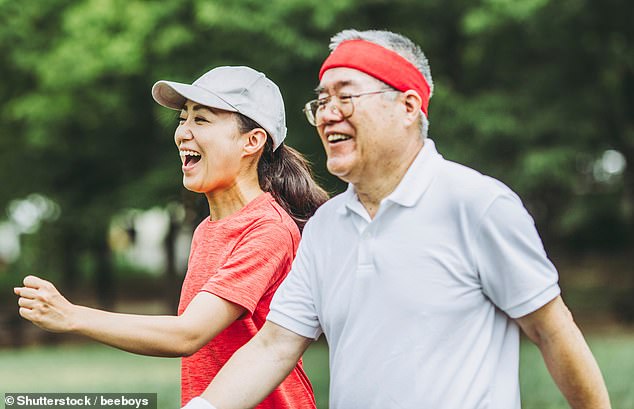 For the study, published in the American Journal of Preventive Medicine, the team  looked at more than 1,500 adults from the national Osteoarthritis Initiative between 2008 and 2014.

Arthritis is inflammation of one or more of the joints, with osteoarthritis being the most common form.

It occurs when cartilage, the tissue that cushions the ends of bone, breaks down from injury or overuse of the joints.

According to the Arthritis Foundation, more than 30 million Americans suffer from it, mostly over age 65.

Osteoarthritis is a top cause of disability in senior citizens and about two in five people with the condition will become disabled.

The participants, between ages 49 and 83, were all considered disability-free at the study’s start. They had their activity levels measured with accelerometers.

Lead author Dr Dorothy Dunlop told DailyMail.com that the team specifically focused on those with lower joint symptoms – hips, knees, ankles and feet – they’re most often the cause of disability.

Researchers found that less than 10 minutes a day of moderate-to-vigorous physical activity – or about an hour each week – made it easier for older adults to perform daily tasks.

Participants who got in an hour had an 85 percent reduced risk of mobility disability, which was defined as walking too slowly to safely cross a street.

They also reduced their risk of daily living disability – such as having difficulty bathing or dressing – by around 45 percent.

‘We were very excited to see that the amount of activity that distinguished people who stayed independent from those who didn’t was substantially less that the standard recommendation,’ said Dr Dunlop, a professor of preventive medicine at Northwestern University Feinberg School of Medicine.

The current recommendation from the Department of Health and Human Services is that adults, including those with arthritis, perform 150 minutes of moderate physical activity per week.

The team followed up with the participants four years later and found that nearly a quarter of adults who were not performing the weekly hour of exercise were walking too slowly to cross the street safely.

Additionally, more than 20 percent said they were having difficulty carrying out their morning routines.

‘This is less than 10 minutes of moderate activity a day,’ said Dr Dunlop. ‘We want people to do as much as they can but, if they’re hesitant to start, I want them to see that they can partake in a little activity and experience health benefits.’

She says she hopes that the findings encourage healthcare providers who are counseling patients to recommend moderate exercise and that policymakers recommend an intermediate goal for those who are inactive.

The new study builds upon previous research that has found physical activity can ease arthritis symptoms and pain in patients.

And a study released last month from Prince Charles Hospital in Queensland, Australia found patients with arthritic knees can perform hip-strengthening exercises to improve the ability to walk and reduce pain.