Children whose mothers suffer from stress while carrying them in the womb may grow up to be more mentally resilient, new research suggests.

It found psychiatric problems were less frequent in children born into high-violence communities where the mother had suffered mental and physical stress during her pregnancy.

The researchers suggest children exposed to stress in the womb develop a natural protective mechanism which makes them more resilient as they grow older.

Children appeared to be tougher when in high-stress environments when compared to those whose mothers did not experience the same issues while pregnant.

But one critic suggested the violence to the mother could damage the development of the baby’s brain, potentially affecting how it functioned after birth. 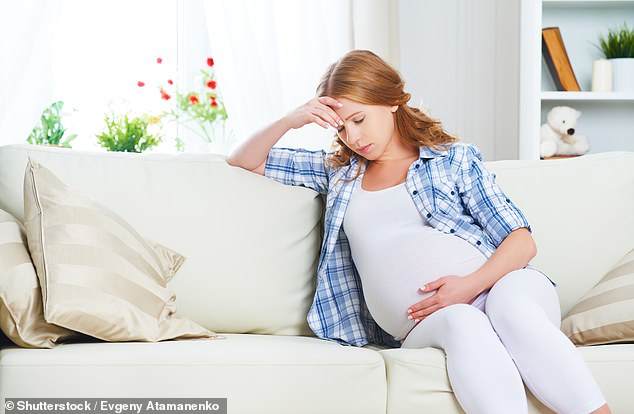 Scientists from the Linkoping University in Sweden analysed 120 mothers and 120 of their children in a tough neighbourhood in Brazil where gang violence and domestic abuse was rife.

While the mothers often showed signs of depression, PTSD and anxiety following the abuse, their children grew up with an ability to ‘shut down stress responses’.

Dr. Daniel Natt, one of the main authors of the study, said: ‘The interviewed children showed lesser psychiatric consequences of prenatal stress than reported repeatedly from less violent populations.

‘Our results will, of course, need further validation since they are based on only one Brazilian cohort.

‘But in this cohort, we were able to replicate other studies showing that children experiencing maternal IPV [domestic abuse while pregnant] after being born have more psychiatric problems.

HOW COULD STRESS AFFECT UNBORN CHILDREN?

In 2011, the Institute of Psychiatry at King’s College London found stressed mothers-to-be were more likely to have unruly, hot-tempered children.

It discovered a strong link between mental pressures on the mother in the first months of a child’s life and the youngster’s behaviour when of school age.

The research, which tracked thousands of babies from the womb to school, found the hormones raise the odds of a child experiencing attention deficit hyperactivity disorder (ADHD) and other other behavioural problems.

In 2013, the University of Pennsylvania’s School of Veterinary Medicine found pregnant women were transmitting damaging effects of stress to her unborn child through the placenta.

Researchers said the damage was done by a protein that affects the developing brains of boys and girls differently.

They believe it could cause disorders such as autism and schizophrenia.

In 2017, a study by the University of New Mexico found stress led to smaller babies.

The findings suggested stress towards the end of a mother’s pregnancy can lead to the underdevelopment of the fetus.

Scientists at the Aarhus University Hospital in Denmark made the link between stress and stillbirth after tracking the health of more than 19,000 women during the last three months of pregnancy.

They found that stressed mothers-to-be are at almost double the risk of stillbirth.

‘Only when maternal IPV occurred both during and after pregnancy these psychiatric problems were less severe. Thus, the prenatal component seems to have played a role here.’

The findings go against years of studies which suggested children born to stressed mothers developed behavioural problems and even autism.

Animal studies in the past have shown prenatal stress leads to behavioural changes in offspring that makes them better equipped to survive in threatening environments.

Dr Natt added: ‘In animals, under some circumstances exposure of pregnant mothers to predators leads to behavioural and molecular changes in the offspring, that are beneficial in predator-rich environments but not otherwise.’

As well as conducting interviews, researchers collected saliva samples from the 240 participants.

They tested the saliva for DNA methylation, a type of genetic change which alters the way genes are expressed without modifying the genetic code.

Based on previous studies, DNA methylation is believed to be involved in shaping psychiatric resilience following early life stress.

The results showed that children whose mothers suffered prenatal stress were able to shut down stress responses more rapidly.

Dr Natt said: ‘We observed that several well-known stress genes, like the glucocorticoid receptor and its repressor protein FKBP51, which both regulate one of our most important stress hormones, cortisol, were among the most differentially methylated.

‘Astonishingly, the way these genes were methylated suggested to us that prenatally stressed children had an enhanced ability to terminate stress responses.’

Dr Natt called for the findings to be scrutinised by others because there may be ‘multiple interpretations of the results’.

He added: ‘One interpretation of the results is that stressed mothers somehow prepare their offspring for a violent environment. I am, personally, skeptical to this interpretation.

‘I would rather believe that violence during pregnancy leads, as many studies have shown, to suboptimal brain development.

‘For instance, prenatal stress has been associated with asocial behavior and a higher risk for autism spectrum disorder.’

The findings have been published in the rigorously peer-reviewed Frontiers in Genetics.